“A one-stop shop.” That's how Michael Grote refers to the Hope Community Center in Biloxi, Mississippi. Grote is the program manager for Architecture for Humanity, one of the key organizations working out of or with the center. The neighborhood known as East Biloxi was hit hard by Hurricane Katrina in 2005 when it came ahsore on the Gulf Coast.

A two-square-mile section of Biloxi bordered on three sides by water, it was, before the hurricane, a relatively low-income area (40 percent of the people there had annual incomes below US$15,000) with a long history of commercial fishing. Its 8,500 residents were largely African-American and Vietnamese. After Katrina’s devastation, redevelopment moved quickly in the rest of Biloxi — with casinos and condos even more prevalent than they were before the storm — but the city has been slow to reestablish affordable housing in East Biloxi. And yet there is a compelling and widely recognized need in this neighborhood, not only for housing but for a renewed sense of community, and for renewed dignity. 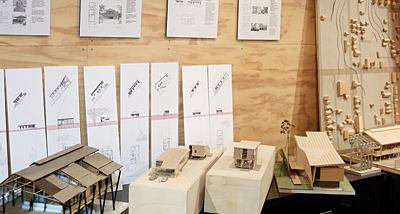 The rebuilding of East Biloxi is the kind of problem that presents too much complexity for the government sector, the business sector, or civil society to tackle alone. It calls for an entirely different approach. The solution to such problems may well lie in designing and implementing new types of in-depth collaboration among related organizations in all three sectors, or what we call a “megacommunity.” Leaders in a megacommunity cannot hope to control the situation unilaterally; they must learn how to work together.

The Hope Community Center represents an example of this collaborative approach. It is not a stand-alone philanthropic outfit. It is a focal point for all the various organizations — charities, businesses, governments (local, regional, and federal) — that were offering help in the form of funds or knowledge or labor but that did not always know exactly where or how to plug in. Michael Grote’s “one-stop shop” characterization refers to the fact that when people from East Biloxi enter the doors of the Hope Community Center needing to rebuild their homes, they find a battery of consultants, caseworkers, architects, contractors, financial advisors, and construction workers who can help them, and who have all been systematically learning to work together toward a common goal.

Hence our interest in this story. We have been part of a team developing a book called Megacommunities: How Leaders of Government, Business and Non-Profits Can Tackle Today’s Global Challenges Together, by Mark Gerencser, Reginald Van Lee, Fernando Napolitano, and Christopher Kelly (Palgrave, 2008). When we learned about this megacommunity-style practice at work in East Biloxi, we set out to document the efforts, working with photographer Alan Richardson, who had grown up in Biloxi. 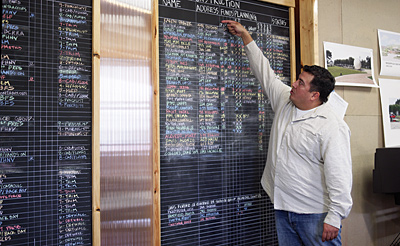 Above/Below: Michael Grote, program manager of Architecture for Humanity, in front of the project board, the heart of the center’s design area. Each new home project is tracked in terms of volunteer group assignments, permit and construction status, and funding. 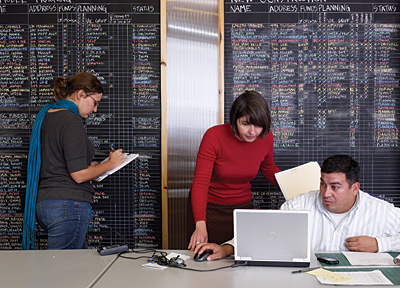 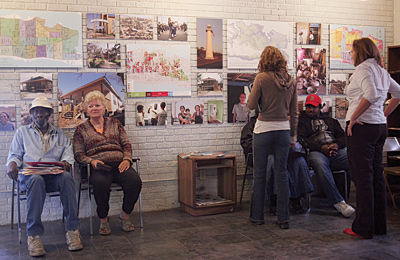 Above: The center’s waiting area. 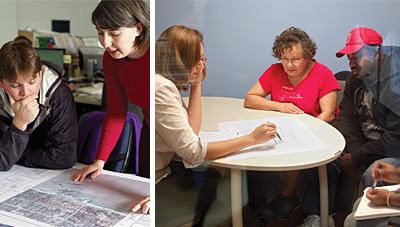 Above: In the center’s meeting rooms, designers and case managers work out blueprint and funding details with clients. 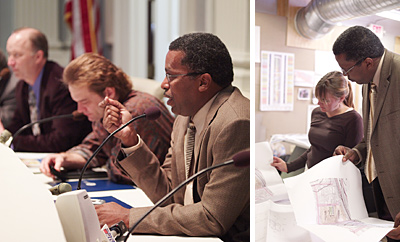 Above: Executive Director Bill Stallworth attends a Biloxi council meeting and then returns to the center to review construction plans with a GCCDS staffer.

The Hope Center brings together a variety of organizations with different capabilities, forms of authority, and access to expertise. They include, for example, the Gulf Coast Community Design Studio (GCCDS), a not-for-profit organization housed in the center; representatives of the local government; and liaisons with local businesses. Employees based at the center locate grant money to rebuild housing, work with residents to design new homes according to their needs, and coordinate with a variety of volunteer organizations to build those homes. Because the Hope Center has connections to the Biloxi city government, it can help with local building variances and it can clear complex FEMA-related hurdles. For example, it can help people understand the new specifications for “base-flood elevations” that establish how high off the ground a new house must be for protection from flooding. The center employs local contractors (and in the process improves their skills for building storm-resistant housing) and works with retailers such as Home Depot and Lowe’s on programs through which they provide materials in exchange for vouchers. In certain cases, the center asks businesses such as Kohler to donate materials and fixtures.

The executive director of the Hope Community Center is Bill Stallworth. In Megacommunities, the authors describe the role of an “integrative leader,” someone who has experience or connections in the public, private, and civil sectors. Stallworth is exactly that type of leader. Currently the vice president of the Biloxi City Council, he is a three-term council member and a former urban renewal officer; he is also a local entrepreneur (founder of a thriving computer-services business and several other enterprises) and a former grant writer for the Joint Center for Political and Economic Studies in Washington, D.C. In the first year after the Katrina disaster, Stallworth was featured in a number of news reports for his efforts to find ways for local residents to use grandfathering laws and other means to offset the high costs of rebuilding.

When these photographs were taken, in December 2007, Biloxi’s reconstruction efforts had been going on for more than two years. During that week, Stallworth and David Perkes, the director of the GCCDS, were using a megacommunity approach to work out a problem: A seriously disabled woman needs to rebuild a house on a plot of low-lying land. But the new regulations require that the new house be built so high off the ground that it would be inaccessible to her. Through a complicated series of discussions and moves, Stallworth set out to influence the city to trade land with the woman so that Perkes and his team (made up of architects from all over the country) might design a house that she could live in. 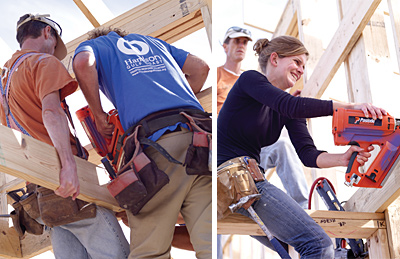 Above: During a “blitz build,” many volunteers and organizations (here, Hands On, Hopeforce, and the Hope Center, among others) come together to feverishly build the frame of a house in one day. 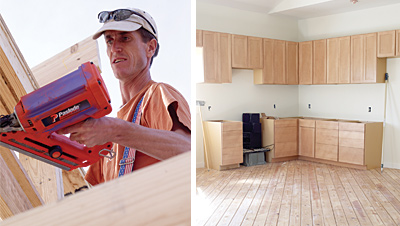 Above left: Brandon Kasteler is the center’s construction manager. Above right, the kitchen of a house by Architecture for Humanity shows a diagonal flooring approach that is used to cut costs and increase stability. 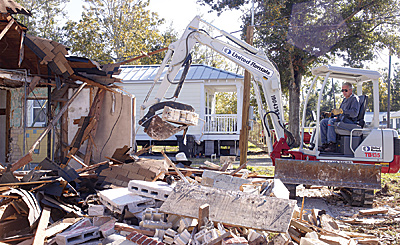 Above: A house that suffered substantial termite and water damage is demolished. 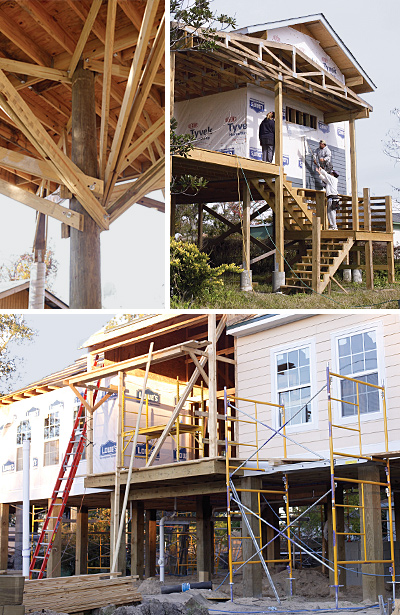 Above: Architecture for Humanity and the GCCDS employ various building techniques to ensure structural stability and ease of use for the families who will move in. Examples shown here include switchback stairs, which are easier to climb, and columns that extend from the ground through the roof.

According to Perkes, the center has 30 or so new construction projects going on at any one time, and 60 or so in a repair stage. Many of those new construction projects are being handled by the GCCDS. Meanwhile, the not-for-profit group Architecture for Humanity is building seven model homes that will serve as experiments in developing methods for construction that are hurricane proof, within budget, and cohesive with the architectural nomenclature of the existing community.

The headquarters of the Hope Community Center, a church that had fallen into disuse after Katrina, serves as the physical focal point for the megacommunity. The interior offices were planned by the GCCDS for easy flow and facilitation; clients (people seeking help) move front to back through the space as they confer with different center team members. There is also a central glass-enclosed meeting area — a hub within the hub — for consultations and planning.

In our view, the Hope Community Center is a great example of the factors that make a megacommunity successful. It has three-sector engagement: fully involved leaders and employees from government, businesses, and not-for-profit organizations working closely to­gether. It has an overlap in vital interests; though East Biloxi did not rapidly bounce back from Katrina and could easily have been marginalized, people from all parts of the city recognized the importance of rebuilding this neighborhood, for the sake of its residents, the city’s reputation, and the region’s overall ability to move
forward. It has convergence: the deliberate efforts of Stallworth, Perkes, and others to collaborate across organizational boundaries. It has cross-organizational teams and facilities, operating over a long period of time. And as people move beyond reconstruction to more aspirational goals, such as revitalizing the community in other ways, the Hope Center has adaptability.

The Hope Center also shows that there is something to be learned from every emerging megacommunity. Each example like this contributes to an expanding experience base. The problems faced by cities such as Biloxi may well grow more complex during the next few years, but by working on them in a megacommunity fashion, we can meet these challenges with a greater collective capacity for sustainable solutions. 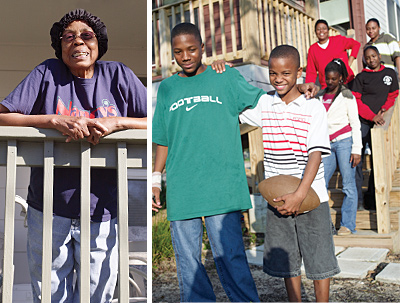 Above left: Patience Harris on the porch of her new home, built by the GCCDS. Above right: After two years of living in a trailer, Karen Parker and her children are ready to move into the first model home completed by Architecture for Humanity.

Above: The center’s staff. 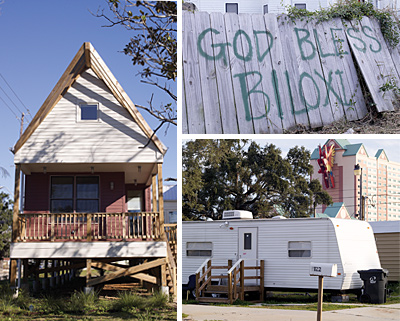 Above: Scenes of post-Katrina Biloxi. 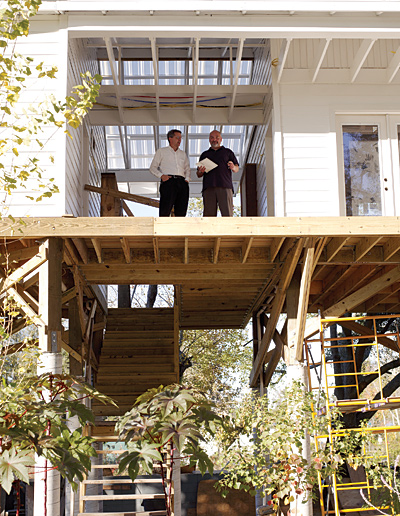 Above: GCCDS Director David Perkes, in the white shirt, shows Lawrence Frascella a new house designed in Biloxi’s vernacular “dog trot” style (with an open breezeway between sections of the house).

Michael Delurey (delurey_mike@bah.com) is a principal with Booz Allen Hamilton in McLean, Va. He specializes in strategic planning, policy analysis, and policy development for government clients with a focus on complex network analysis, critical infrastructure protection, and geocomplexity. He is the project director for the megacommunities research group at Booz Allen.
David Sulek (sulek_david@bah.com) is a principal with Booz Allen in Herndon, Va. He leads a team of policy analysts focused on homeland security, protection of critical infrastructure, information sharing, public–private partnership issues, and national preparedness. He has researched and written about the development of megacommunity concepts in emergency preparedness.
Lawrence Frascella (edleaf@aol.com) is a consulting editor for Booz Allen’s megacommunities research group. He is the coauthor, with Al Weisel, of Live Fast, Die Young: The Wild Ride of Making Rebel Without a Cause (Simon & Schuster, 2005). His work has appeared in numerous publications, including Aperture, Rolling Stone, and Harper’s Bazaar.
Alan Richardson (alan.richardson@verizon.net) is an award-winning photographer whose work has appeared in Bon Appétit, Gourmet, Esquire, GQ, and The New York Times Magazine; he has also coauthored several books, including The Breath of a Wok (Simon & Schuster, 2004) and The Four Seasons of Italian Cooking (Time-Life Books, 1998).

Topics: design, research, authors, consulting, writers
The business insights you need to succeed. Get s+b’s best ideas delivered to your inbox twice a week.
Sign up         No, thanks