Return on Character: The Real Reason Leaders
and Their Companies Win 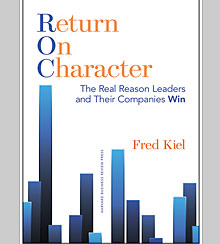 It’s rare to find a business book, let alone one on leadership, that is well researched, well documented, well written, convincing, credible, and imbued with a voice that one grows to both trust and admire. Fred Kiel’s 200-pager, Return on Character: The Real Reason Leaders and Their Companies Win, is a standout for at least three reasons.

First, there’s the mission of the book itself. Kiel cofounded a consulting firm called KRW International, which set out nine years ago to interview 84 CEOs and their executive teams in depth (while also polling some 8,600 employees). The goal: to find the connection, if any, between the “character” of a leader and an organization’s performance. Though many other authors have touched on the subject, the book’s publisher (Harvard Business Review Press) claims this is “the first major study to show a measurable relationship between CEO character and business success” — i.e., the “return on character” (ROC).

Second, Kiel infuses his book’s conclusions with enough data (nicely graphed) that even the most hard-nosed reader would have to concede they are substantiated, even if that reader wanted to debate them.

Third, this is not an autobiography or a hard sell for the author’s consulting services, as many business books are today. Rather, it’s a manual for 21st-century leadership. And Kiel acknowledges from the start that at the age of 75, he wrote the book because he wants “to inspire a movement that forever changes people’s expectations of leadership and performance in organizational life.” The book carries the tone of someone who wants to share both current research and seven decades of personal experience. Throughout, Kiel comes off as a generous sage, not as a profit-seeking consultant.

Kiel’s team started with a “metric for assessing the character-driven behaviors” of the 44 U.S.-based companies from which they were able to compile a complete set of both interview and financial performance data. The survey included Fortune 500, private, and nonprofit companies.

Character isn’t a term that is as precise and measurable as, say, return on assets (ROA). So Kiel discusses how the researchers came to define the word as being innately tied to integrity, responsibility, forgiveness, and compassion. Those four “universal principles” were then refined into key behaviors (such as “telling the truth” for integrity). And it was those behaviors that the researchers sought to measure.

After all the interviews and surveys, Kiel’s team designated the top CEOs on the character scale as “virtuosos” and those at the bottom as “self-focused.” The simple naming of those two CEO categories will help you understand the core message of the book. For Kiel, it’s not enough to lead an organization by simply meeting goals or making a profit. Virtuosos use both head and heart to orchestrate a high-performance team that includes board members, top executives, managers, and employees. That team serves all those who have an interest in the company or who are affected by its policies and practices. Self-focused leaders, says Kiel, are mainly out for themselves and few others.

Virtuosos use both head and heart to orchestrate a high-performance team.

Kiel’s profiles of the CEOs high on character as well as the character-challenged are sufficiently descriptive that it’s not hard to see how they act in the office on a daily basis. The book amply details the behaviors of both extremes of CEOs, enough so that you find yourself unconsciously coming up with real names of people you have worked for in place of the anonymous names Kiel uses. Though he lists the names of CEO participants who gave their permission, he expands on only a few ROC champions, such as former Costco CEO Jim Sinegal, former REI CEO (and current secretary of the Interior) Sally Jewell, and Barry-Wehmiller CEO Bob Chapman.

What sets this book apart from its peers in the marketplace is the handsome way it links research data to behavioral descriptions. As Kiel develops his argument, he weaves in charts that illustrate how the two kinds of leaders differ. For example, more than twice as many virtuoso CEOs said they had a supportive mother or father.

As for quantifying the financial return on character, Kiel posts an attention-grabbing chart that shows that CEOs who qualified as virtuosos achieved a 9.35 percent return on assets (defined as net operating income as a proportion of total assets), while those tagged as self-focused scored just a 1.93 percent ROA, over a two-year period. He says the research showed that the virtuosos at the top end of the curve performed more than five times as well as the self-focused execs at the bottom end of the curve. For some, this gap will be the definitive reason to read this book.

But a stronger reason to read it can be found in its third section. Kiel argues that one’s character can be changed, and he details the six steps others have taken to move from self-focused myopia to a world view that stresses unity of purpose, harmony of teamwork, commitment to performance, and contribution to community.

One of the pleasures of Return on Character is getting to know Fred Kiel. In the introduction, Kiel concedes he was self-focused in his early career: “I’m sure many of my colleagues in those days felt that I was more than willing to throw them under the bus if it meant more success for me.” By the conclusion, when he lays out an impassioned manifesto for a new direction in leadership, we realize how much Kiel has evolved. “People are hungry,” he writes, “to have a model of leadership that they can believe in, one they can aspire to, one that is founded on and nourished by a shared humanity.”

It’s rare to find a business book that, at the end, makes one want to cheer both the author and the cause he champions. Return on Character is such a book, and it deserves our immediate and thoughtful attention.