The Age of Sustainable Development 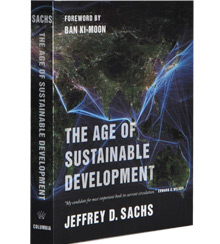 Jeffrey D. Sachs is a brilliant, charismatic, controversial macroeconomist who plays a catalytic role in the inspiration, mobilization, and delivery of large-scale development aid from rich countries to poor countries, especially those in Africa and South Asia. He is director of the Earth Institute at Columbia University and a special advisor to the secretary-general of the United Nations, Ban Ki-moon, on the Millennium Development Goals (MDG).

The Age of Sustainable Development is the aspirational title of a lavishly illustrated, thick (544 pages!) primer on the topic. As Sachs emphasizes throughout the book, our world is a long way from achieving this desirable state of sustainable development, defined as “development that meets the needs of the present without compromising the ability of future generations to meet their own needs.” The book itself is the product of a massive open online course (MOOC) of the same name, with 14 chapters that match the 14 lectures delivered. It is pitched at the broadest possible readership and requires no technical expertise to understand.

Other economists have criticized Sachs’s theory of development as “top-down,” “high-modernist” in character, a throwback to the mid-20th century, when it was thought that Western technocrats wielding financial aid, science, and technology could solve all of humankind’s problems. In those days economic development experts used an engineering, analytical style in their search for generalizable, scalable solutions to common challenges. Scientific knowledge was prized above all other kinds. Unfortunately, these well-intentioned efforts often foundered on unsuspected cultural obstacles and hidden social dynamics. (A classic case of this could be seen in Chicago, where slum-clearance efforts replaced low-rise housing with Cabrini-Green, a massive, densely populated, and soon crime-ridden housing project, which was built in the 1950s and demolished 50 years later.)

The author does little to allay concerns that he may be urging an outdated approach with his master metaphor: Development experts are like doctors and countries are like patients. Sachs goes on to describe the role of “clinical economics” and emphasizes the need for a “differential diagnosis” in complex systems, where no two situations are quite the same. The image of rich, smart Western “doctors” prescribing treatments to poor, ignorant Third World “patients” bothered this reader throughout the book.

And there is plenty of time to be bothered. Following the basic “101” university courses that MOOCs are slated to replace, every chapter of this long book contains numerous lists of definitions, concepts, factors, forces, and metrics. Sachs methodically works his way through four complex systems: the global economy, societal interactions, the Earth’s environment, and political governance. Among other facts, we learn that there are 10 planetary boundaries to growth, seven sources of poverty, six approaches to ethical questions, and five policies for dealing with the tragedy of the commons. Although comprehensive, this classification system seems abstract and painfully “thin,” which is to say it reads like an accounting system that can capture, classify, and measure a vast range of transactions in an enterprise, but cannot tell correlates from causes.

If Sachs’s sustainable development framework were just a measurement system, it would be a significant achievement and a valuable addition to the field. But his claims go well beyond data gathering. Sachs contends at the outset that the book represents a new way of understanding the world and solving global problems. This overblown claim lays the author open to charges of intellectual arrogance.

He offers two tools, “backcasting” (working backward from a goal) and “technology road-mapping,” as ways of getting “from here to where we need to be.” But the success of these techniques depends entirely upon having knowledge of cause and effect in immensely complex systems, which is precisely what we lack. Sachs has, for example, been a great champion of the free distribution of mosquito nets as an effective protection against malaria. They work well — provided, that is, the locals use them to protect their children first and not their goats. In addition, when they are misused as durable fishing nets, as often happens, those nets can devastate local fish populations. In complex systems, unintended consequences abound.

By this time readers skeptical about “top-down,” modernist approaches to development will be thoroughly alarmed and reaching for their copies of Friedrich Hayek’s The Fatal Conceit. (In Hayek’s view, the fatal conceit was the notion that “man is able to shape the world around him according to his wishes.”) The instrumental rationality thread, anchored in the opening doctor–patient analogy, runs throughout Sachs's book. The author seems to believe that answers can be found in science and technology, whereas other forms of knowledge embedded in culture and language are seen, if only by implication, as a hindrance to change. No mention is made of other approaches to development such as the more organic positive deviance movement (see my review of The Power of Positive Deviance, by Richard Pascale, Jerry Sternin, and Monique Sternin), which emphasizes harnessing local cultures and communities to tackle wicked, intractable problems and make change sustainable.

Sachs has been an eloquent spokesman and a passionate activist in bringing the plight of the very poor to the attention of the affluent people of the world. He has stressed the urgency of our response to climate change. Via the United Nations’ MDGs, he has created the goals and metrics so essential to improving the lives of millions. But to be effective, goals and metrics must be embedded either in a deep understanding of cause and effect or in a thoroughgoing learning process that leads to that understanding. Absent this, what was intended to be economic development becomes humanitarian aid — helpful perhaps, but not sustainable. In 2005 Sachs began the five-year (now 10-year) Millennium Villages Project (MVP) as a practical intervention to demonstrate the pathways to achieving the MDGs and discover a scalable “formula” for success. Ten villages in 10 countries, each in a different “agro-ecological zone,” were chosen. Backers raised US$120 million to fund the project, mainly from philanthropists such as George Soros. The experiment ends in 2015, and its results will be assessed in 2016. There is much debate about how decisive any evidence will be, given the uncontrolled nature of the experiment. But for the moment it is unclear whether Doctor Sachs’s prescriptions will usher in an age of sustainable development.