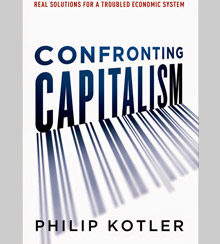 In the U.S., about 70 percent of economic activity is made up of consumer spending. Typically, critiques of America’s world-beating consuming habits have come from the political left or from people who are outside the system. But in Confronting Capitalism, economist Philip Kotler, revered as a marketing guru by management students and professionals, turns his lens on the way capitalism rolls. And he doesn’t like what he sees.

Books on capitalism abound; read this one to get an insider’s view of the vulnerabilities of our economic system. Kotler is troubled by consumer spending patterns because, he points out, the top 5 percent of U.S. households earn more than a fifth of the national income, but they spend a comparatively small portion of their total income on consumption. While they remain preoccupied with saving, investing, and managing their wealth, the middle and working classes drive consumer activity and hence economic growth. And because the latter groups’ incomes haven’t been growing, typical shoppers are borrowing in order to spend. In “debtor-capitalism,” as Kotler dubs the system, consumers are over-purchasing “questionable marketing outputs” such as unhealthy foods and guns, and achieving instant gratification by taking out easy loans to buy cars, gadgets, and larger-than-necessary homes.

In “debtor-capitalism,” as Kotler dubs the system, consumers over-purchase “questionable marketing outputs” such as unhealthy foods and guns.

Although Kotler identifies and discusses 14 major shortcomings of capitalism, this structural mismatch between income and spending appears to be the crux of the matter. In Kotler’s view, debtor-capitalism largely explains the paradox of the last several years — growth in the overall economy co-occurring with declining median incomes. The reliance on debt to fuel consumption also makes capitalism’s business cycles more severe, as evidenced by the housing bubble that preceded the most recent recession, which was the deepest and longest since the Great Depression. And as disruptive forces such as emerging market competitors and new technologies increase market turbulence, it will become more vital to moderate the impact of boom-and-bust cycles.

To be sure, constructing an argument around 14 flaws in capitalism — including income inequality, environmental exploitation, political lobbying, and excessive debt — could make for a complicated read. But Kotler, true to his marketing expertise, manages to keep it simple by competently showing the interconnections between the issues. Confronting Capitalism is more broad than deep, but Kotler’s wide-ranging knowledge of business and economics is evident. He draws from his own research, published in previous books, to show how business models of companies such as Patagonia and Panera Bread combine corporate social responsibility and philanthropy with marketing. He also weaves together research and perspectives from other like-minded sources, such as Nobel laureate economist Robert Shiller (who has argued for insurance protection to cover such risks as declining home values) and the MIT living wage calculator (which shows the glaring gap between minimum wage and the basic cost of living in the U.S.).

Kotler reads the academic work of Thomas Piketty and other economists but expresses his argument in the more accessible patois of a columnist such as Thomas Friedman. This approach has its advantages: He is making his case to a broad set of stakeholders, ranging from capitalism’s populist detractors to business leaders and policymakers. And it is clear he is trying to preserve and improve the system, rather than tear it down. Early in the book, drawing inspiration from Winston Churchill’s famous quote about democracy, Kotler writes: “I accept the possibility that capitalism may be a poor way to run an economy, except for all the other forms that have been tried and failed.”

Kotler’s prescriptions for making capitalism more just and sustainable rely heavily on joint public and private efforts. Take the question of the minimum wage, for example, which he says should be not only raised by legislation, but also boosted voluntarily by companies. Kotler points out that Henry Ford doubled his workers’ salaries so they could be happier and buy more cars. He believes capitalists ought to care and governments ought to regulate, or capitalism will self-destruct. Challenging the stark choice once presented by former Federal Reserve chairman Alan Greenspan between the two poles of individual self-reliance and government dependence, Kotler argues that we must strike an appropriate balance between the two.

Nearly seven years after the collapse of Lehman Brothers, this argument seems to be resonating in the United States. Companies such as Walmart, McDonald’s, and Aetna have announced higher minimum wages, and cities are passing bills to raise wages above the federal minimum, which remains stuck at US$7.25 an hour. Kotler is among those who believe that companies that pay their employees higher wages and treat them well (he cites Costco, Trader Joe’s, and Lego as examples) outperform their competitors. But he wants business to do much more than raise the floor under wages. For example, he argues that firms should change executive compensation packages to reward managers for reducing environmental costs.

Reforming executive pay structures is a good idea, and also an old one. The challenge is how to do it. Today’s compensation packages are notoriously complex. And therein lies a weakness in this otherwise well-reasoned book. Some of Kotler’s “real solutions” sound unrealistic. Many come off as utopian. And we don’t get much insight on how to implement them. To redistribute incomes, for example, he recommends placing a $10 million cap on individuals’ annual income; all income an individual earns above that threshold would be directed toward addressing social problems. One of his prescriptions for dealing with persistent unemployment is to encourage people to live more simply, work less, save more, retire earlier, and enjoy life.

Yes, the conversation on capitalism is changing and, without a doubt, middle-class travails will be at the forefront of the country’s 2016 presidential campaign. But it’s hard to imagine many of Kotler’s ideas making it to the candidates’ platforms. Besides, capitalism is no longer predominantly a U.S. or even a Western phenomenon. Many of the measures he proposes, whether businesses reducing their carbon footprint or governments taxing wealth, require global cooperation.

Moreover, there is still a compelling case to be made for devising policies that encourage more consumption. Since the 1980s, inequality within the U.S. has increased, but global poverty levels have fallen. The World Bank estimates that the proportion of developing-country citizens living in extreme poverty dropped from about 50 percent to 21 percent between 1981 and 2010, in part because of consumer-driven growth in emerging economies.

Still, this well-written, heartfelt argument deserves to be read because it will make you think, even if it leaves you unsure of what to do. That a wealthy society should purchase less and redistribute more is a radical idea coming from a marketing expert, especially at a time when economists fret over long-term stagnation in developed economies — i.e., the notion that a chronic shortfall in demand will lead to a period of meager growth. Kotler’s vision of a kinder, gentler form of capitalism may help us make peace in an era of diminished expectations.

Topics: economy, economics, stakeholders, investing, academics
Get s+b's award-winning newsletter delivered to your inbox. Sign up No, thanks