Why Good People Can’t Get Jobs: The Skills Gap and What Companies Can Do about It 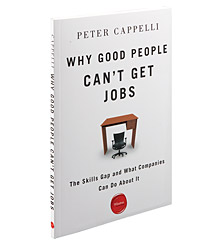 Even with the official unemployment rate in the United States stuck at close to 8 percent, it has become an article of faith that the problem with the labor market isn’t a shortage of jobs, but a lack of qualified employees. Industry surveys support this belief: ManpowerGroup’s 2012 Talent Shortage Survey found that more than half of U.S. companies had trouble filling jobs, and the Manufacturing Institute’s 2011 Skills Gap Report found that 67 percent of companies had a moderate to severe shortage of qualified workers.

Faced with these grim figures, Peter Cappelli wants to debunk the notion that U.S. workers are somehow to blame. In his new book, Why Good People Can’t Get Jobs: The Skills Gap and What Companies Can Do about It, the George W. Taylor Professor of Management at the University of Pennsylvania’s Wharton School and director of Wharton’s Center for Human Resources points to corporate employment practices as the primary cause of the gap between the know-how companies say they want and the skills that current and new employees can bring to their jobs. Most pernicious of all may be the “free agent” practice of hiring when new skills are needed, rather than retraining a company’s existing employees.

Cappelli describes a “Home Depot view of the hiring process” in which employers hire new employees the same way consumers buy a replacement part for a washing machine. “Job requirements have very precise specifications,” he writes. “Job candidates must fit them perfectly or the job won’t be filled.” The problem is exacerbated by automated hiring systems that screen out applications that don’t use precisely the right keywords in a job description—systems many companies adopted in their efforts to cut HR costs after the Great Recession.

Diminished HR departments themselves reflect the larger problem—a fundamental shift in how much U.S. companies are willing to invest in their employees. Cappelli argues that in corporate America, training has largely given way to poaching employees from competitors. This can lead to a self-defeating cycle in which companies lose their investments in training, cut back on it even further, and grow ever more dependent on poaching.

Jobs requiring technical expertise at all levels provide the best illustration of the training gap and its consequences. Even though factory automation calls for more highly skilled operators, Cappelli finds an inverse relationship between how much companies invest in automation and how much they spend on training. For example, apprenticeship programs, which were once ubiquitous in the U.S. manufacturing sector, have virtually disappeared. The result, he says, quoting one manufacturing expert, is “less preventative maintenance, more emergency breakdowns, and lower skilled workers.” Countries with strong apprenticeship programs, such as Germany and Norway, are least likely to report a skills gap.

Even engineers and scientists, whose expertise is said to be in shortest supply, have trouble finding jobs and holding on to them. Silicon Valley, with its fast innovation cycles, is the exemplar of a free-agent industry; many jobs last only as long as the life span of the latest product.

“U.S. companies are extraordinarily sophisticated about virtually all aspects of their supply chains—except when it comes to labor,” concludes Cappelli. “They regularly calculate whether it makes more sense to build or buy components, for example, but seem completely stymied by the idea that training a workforce could be an option.”

The solution, he argues, is to revive in-house training programs and improve the links between companies and education institutions, because training and apprenticeship programs work best when they provide trainees with experience on the actual systems and equipment used by employers. In Houston, for example, the Independent Petroleum Association of America has set up industry-tailored, advanced-placement courses within selected public schools as a way to fill entry-level jobs in the oil patch (see “School Reform for Realists,” by Andrea Gabor, s+b, Autumn 2012). Currently, however, on an OECD (Organisation for Economic Co-operation and Development) list that evaluates 29 countries based on how much they teach work-based skills in high school, the U.S. ranks dead last.

Further, Cappelli believes that cultivating talent in-house can be more economical than hiring it from outside. He cites a study by Matthew Bidwell, a colleague at Wharton, that found that when managers are hired from the outside, it takes three years for them to catch up to the level of insiders’ performance. But it takes the insiders seven years to catch up to the pay levels of the outside hires. The logical conclusion is that even if they offered somewhat better benefits and pay, companies would still save money and enhance performance by investing in their own people.

A decade ago, in the Harvard Business Review, Peter F. Drucker warned that the “attenuation of the relationship between people and the organizations they work for represents a grave danger to business.… Developing talent is business’s most important task—the sine qua non of competition in a knowledge economy.” In a concise polemical fashion, Cappelli makes a strong case that those chickens have come home to roost in the U.S.—and that managers everywhere can learn to see training as a form of leverage.

Topics: automation, skills, training, investing, experts
Get s+b's award-winning newsletter delivered to your inbox. Sign up No, thanks