The Resilience Dividend: Being Strong in a World Where Things Go Wrong

When Hurricane Katrina struck New Orleans in 2005, nearly 80 percent of the Vietnamese-Americans living in Village de L’Est, an enclave in the northeastern corner of the city, had already left. But they didn’t scatter across the nation as most people fleeing the city did. Instead, they held together as a community, staying with friends and relations in Houston and maintaining their close ties with and through the Catholic church. After the storm, they were among the first residents to return—successfully negotiating to get their power and other utilities turned back on quickly. Once home, they joined forces with Village de L’Est’s black residents to build a community that was even stronger and more cohesive than before the catastrophic storm. 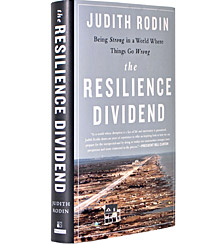 This is the power of resilience, explains Judith Rodin, author of The Resilience Dividend. Rodin has a natural interest in resilience, which she defines as “the capacity of any entity…to prepare for disruptions, to recover from shocks and stresses, and to adapt and grow from a disruptive experience.” Since 2005, she has served as the president of the Rockefeller Foundation, a century-old, US$3.6 billion philanthropy with two principal goals: helping communities and institutions prepare for and emerge stronger from crisis, and supporting the development of inclusive economies that yield broadly shared prosperity.

In the book, Rodin outlines a framework for achieving resilience, the mind-set needed to implement and utilize it, and practices that support it. She illustrates each with examples, like Village de L’Est, that offer a fresh take on the many ways that organizations can recover and grow from unexpected setbacks.

Rodin’s resilience framework has five components: being aware of one’s situation and vulnerabilities; being diverse, in order to mount a range of responses; being integrated, in order to ensure collaborative solutions; being self-regulating, in order to prevent disruptions from cascading through the system; and being adaptive, in order to improvise in the face of challenges. These components chime with author Nassim Nicholas Taleb’s conception of antifragility—even though he defines resilience in a less robust way than Rodin and argues that antifragility is more desirable because it allows systems to thrive amid volatility, not just survive it.

The mind-set that Rodin proposes is rooted in systems thinking and in ecological concepts of adaptiveness. The latter explain how, over time, cause-and-effect relationships can change, creating vulnerabilities and making preventive action seem too costly, even when it is obvious that the cost of recovering from a disaster would be exponentially greater.

The mind-set Rodin proposes is rooted in systems thinking and ecological concepts of adaptiveness.

As an example, Rodin points to Medellin, Colombia, where authorities spent many years locking up bad guys, but could not break the cycle of poverty and violence that made it the most dangerous city in Latin America. Only when Medellin tackled systemic causes, such as the lack of mobility that isolated the residents of the city’s hillside slums, did the situation begin to improve. One part of the solution was a public transportation system that included huge escalators, which connected those residents to basic services such as police, fire, health, and education.

The practice of resilience requires readiness, responsiveness, and a capacity for revitalization. These are particularly important, says Rodin, because of the vulnerabilities posed by trends such as urbanization, climate change, and globalization. Planning does not constitute readiness: Memorial Medical Center in New Orleans had 20 distinct emergency plans. But when Katrina struck and the basement-level generators failed, no one could grasp the whole picture and coordinate the recovery effort. Rodin says that what was missing was a “culture of preparedness.”

Indeed, the book makes clear that the social dimension of resilience is an all-important, but highly complex consideration when it comes to addressing vulnerabilities before they reach a critical level and when it comes to recovering from disasters. Rodin’s fascinating description of the 2011 To¯hoku earthquake and tsunami shows that the reflexive obedience to authority embedded in Japanese culture contributed both to the scale of disaster (especially the events at the Fukushima Daiichi nuclear power plant) and to the smoothness and speed of the nation’s recovery.

It’s intriguing that the author of The Resilience Dividend is the head of a leading philanthropy. In the early 1990s, Peter Drucker made a strong argument that neither government nor the private sector could build the sense of community needed to meet the challenges of what he labeled the Knowledge Society. He thought the “social sector” was our last, best hope for that. Judith Rodin’s thoughtful, organic approach to enhancing the resilience of social groups suggests that Drucker’s faith in NGOs might not have been misplaced.