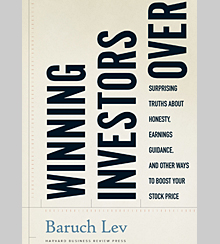 Many world problems are worth solving, but just because a problem is worthy doesn’t mean a company should take up the cause. As NYU Stern School professor and “intangible assets” expert Baruch Lev convincingly argues in the following excerpt from his new book, the decision to pursue a corporate social responsibility (CSR) initiative should be made on the same basis as any other strategic decision. Is your company properly equipped to make a contribution? Can it bring something to that endeavor that no one else can?

In other words, your investments in reputation and responsibility should be made through a capabilities filter. Just as a not-for-profit organization that acts coherently — by applying its core strengths to a selected set of problems — delivers more value to the world than an NGO that chases funding wherever it may lie, a company that aligns its CSR efforts to its distinctive capabilities system is far more likely to win, both in the marketplace and in the world at large. That means taking on only those initiatives that really fit with both your strengths and your identity. Better yet, the initiative should be something that reinforces and helps build the capabilities that define what you do well and what you truly believe in as a company and as leaders. Ignoring this lesson often results in a twofold penalty: the failure of the CSR initiative and the opportunity cost that is incurred because you didn’t put your core capabilities to work.

An excerpt from Chapter 9 of Winning Investors Over:
Surprising Truths about Honesty, Earnings Guidance, and Other
Ways to Boost Your Stock Price

What’s a CSR initiative that’s worth doing? My succinct answer: that which the company can do substantially better, in benefit-to-cost terms, than its shareholders (“Anything you can do, I [can do better]”). I derive this maxim directly from [economist Milton] Friedman’s rejection of CSR, which rests on two arguments: managers have no special expertise in prioritizing and fixing social, health, or environmental ills, and shareholders should be the arbiters of what to do with their money (corporate profits). It’s obviously very hard to object to Friedman’s logic, except where managers bring unique corporate capabilities to bear on CSR — functions in which they clearly have expertise and supporting assets — and which individual investors, lacking such capabilities, cannot, of course, match.

The main advantage of my CSR maxim is that, in contrast to the oft-suggested innocuous slogans — CSR should be an integral part of the company’s strategy, CSR should be embedded in the corporate genes, doing good while doing well, and the like — my “anything you, the shareholder, can do, I can do better” criterion is operational. It provides managers with a workable decision rule for selecting CSR projects: In essence, follow your unique, specialized capabilities. Consider the following cases:

Michael Porter and Mark Kramer described Cisco’s initiation of the Networking Academy project in 1997. Cisco realized that its initial CSR program for designing and installing computer networks for schools was impeded by the lack of qualified personnel to maintain the networks. Hiring network experts for schools was constrained by the general shortage of these professionals in both the public and private sectors. Using its specialized capabilities as the leading worldwide provider of network equipment, Cisco’s engineers developed Web-based, distance learning curricula to train and certify secondary and postsecondary-school students in networking administration. By 2008, the fast-expanding Network Academy trained six hundred thousand students in a year in more than a hundred sixty countries. As Porter and Kramer note: “Because the social goal of the program was tightly linked to Cisco’s specialized expertise, the company was able to create a high-quality curriculum rapidly and cost-effectively, creating far more social and economic value than if it had merely contributed cash and equipment to a worthy cause.” This laudable program, training a large number of young people all over the world in a highly demanded, high-paying skill, obviously cannot be conducted by Cisco shareholders. Moreover, as is often the case when managers use specialized capabilities in pursuing CSR, the company and its shareholders benefit, too — a win-win situation. Cisco, as the industry leader, has a large number of academy graduates who enable IT users around the world and boost demand for Cisco’s products. This program obviously meets my criterion for worthy CSR.

Another case that meets my CSR maxim is recounted by John Peloza: Home Depot partnered with KaBOOM!, Inc., a nonprofit outfit that builds playgrounds in U.S. inner cities. Home Depot contributes the program cash, products, and employee volunteers, as well as access to the company’s accounting and legal staff. The fact that Home Depot’s operations are spread nationally allows local stores to maintain close relationships with KaBOOM!’s playgrounds and provide specific needs on an ongoing basis. Thus, several of Home Depot’s unique capabilities are central to this CSR. The local reputational benefit to the retailer is a sweetener to the deal.

A questionable case of worthy CSR, from Porter and Kramer, is American Express’s funding of travel and tourism academies in secondary schools aimed at training students for careers in travel agencies, airlines, hotels, and restaurants. The case for this CSR is less straightforward than Cisco’s and Home Depot’s, since unlike networking administration, the tourism, hotel, and restaurant businesses are not emerging, high-growth areas in short supply, and hence the social need for philanthropic support of such training is not self-evident. Nor are American Express’s specialized capabilities in training such personnel obvious. True, the company has widespread travel operations, but its core business is finance and credit cards, not training. Furthermore, tourism and hotel management training and education are widely provided by colleges and trade schools, so the need for another provider isn’t clear. My “I can do better” maxim is less compelling here.

Clearly inconsistent with my worthy CSR maxim are corporate contributions to charities and NGOs, unrelated to their core business and specialized capabilities, such as AT&T’s [US]$100 million gift (in 2008, spread over four years) to address the problem of high school dropouts. “We view it like any other investment we make,” said the president of AT&T Mobility, the company’s wireless operations, according to the New York Times. Really? Are high school dropouts using cell phones less intensely than graduates? Or, consider Freddie Mac, the government-sponsored mortgage company that essentially collapsed in the 2007 to 2008 financial crisis. Freddie contributed in 2006 over $3 million to foster care and adoption agencies, $1.3 million to public awareness/education causes, $6.1 million for stable homes and stable families, and a further $2.3 million for strengthening families (already stable? or still unstable?), as well as $5.3 million for youth development, for a total 2006 contribution of close to $18 million. One wonders whether channeling that $18 million to hire a few top-notch risk analysts to monitor Freddie’s risk which had spiraled out of control would have prevented its financial collapse and megabillion bailout at taxpayers’ expense.

Finally, an intriguing question: should CSR activities always benefit the bottom line in addition to furthering social goals? Porter and Kramer, among others, seem to think so: “The essential test that should guide CSR is not whether a cause is worthy but whether it presents an opportunity to create shared value — that is, a meaningful benefit for society that is also valuable to the business.” It’s undoubtedly laudable to create such “shared value,” such as Walmart’s campaign to slash 5 percent of its packaging materials by 2013, saving trees and energy along with shareholders’ money. I expect that my maxim — conduct those CSR initiatives that are enabled by the company’s specialized capabilities — will in most cases generate a shared benefit, particularly for leading companies, such as Cisco and Home Depot, which can capture much of the social benefit. Yet I don’t believe that a company should rule out occasional CSR initiatives where using its specialized capabilities creates significant social value, even without a direct benefit to earnings and shareholder value, as long as such initiatives will not prevent the company from achieving its strategic targets. For example, TNT NV, a Dutch delivery and logistics company, has a task force of some fifty employees ready to intervene in emergencies around the world, such as the 2004 Asian tsunami or the 2007 Bangladesh floods. Such a CSR initiative, while obviously “doing good,” using TNT’s specialized logistical expertise, isn’t a revenue generator, yet it doesn’t seem to hurt TNT’s financials: from 2004 to 2007, its revenues grew 25 percent and its net income rose 31 percent. Doing good and doing well is great, but occasionally doing good, period, is fine too.