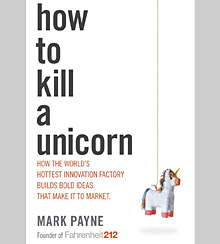 In 15 years of studying more than 220,000 companies, I’ve found that several traits repeatedly pop up in the most successful ones: They have a culture of curiosity, a willingness to make lots of small bets, and a drive for speed. You see these traits at work in Nucor Steel, for example, where the workers in the company’s mini mills gather in the parking lot before their shift to talk about how they can turn out more tons of defect-free steel; you see them at Starbucks, which made 150 small bets on new products and services during the first 18 months of its turnaround begun in 2008—bets such as serving oatmeal, which my research suggests could produce more than a half billion dollars in new revenue annually.

In the excerpt below, Mark Payne—cofounder of the innovation consultancy Fahrenheit 212—argues that most companies are not taking full advantage of their existing capabilities. His reasoning meshes with my own observations, above. What better target for curious inquiry than capabilities that you already have at hand? What better grist for the mill of small, inexpensive experiments? What better chance to quickly grasp the opportunities that are revealed? Companies such as Nucor and Starbucks have already embraced this lesson; your company should, too.

An excerpt from chapter 10 of How to Kill a Unicorn: How the World’s Hottest Innovation Factory Builds Bold Ideas That Make It to Market

At the core it’s pretty simple. Whether you’re a one-woman startup, an innovation leader in a huge company, or a VC angel, any attempt at innovation is a form of investment. You’re pouring in something highly valuable—your inspiration, your sweat, your passion, your time, your tenacity, and somebody’s money (your company’s, your own, or your investors’). Presumably you’re doing all this in pursuit of some form of meaningful outcome; you want a worthwhile return on your investment. ROI can mean different things to different people. Economic yield relative to other things you might have done with the resources you sank in. Or if your motivation is more about the emotional gratification of seeing your idea come to fruition and make a difference, we might call it Return on Imagination. But you want impact.

In pursuit of whatever ROI means to you, scribble this on your innovation wall: a capability in hand is worth ten in the bush.

“A capability in hand is worth ten in the bush.”

What this means is that the odds of obtaining impact for effort are vastly greater if you set out to bend and cleverly reapply existing operational capabilities—yours, your company’s, or your suppliers’—than if you operate far outside of them.

The world undoubtedly needs more [Charles and Ray] Eameses with that tireless persistence to spend years toiling away to solve a production challenge. And to be sure, many of Apple’s successes lay in the way they pushed the limits of what their suppliers knew how to do, developing new production methods, ever-smaller components, and new standards of fit and finish. But conceiving an innovation that’s predicated on the arrival of a capability that’s not readily accessible dramatically ups the odds that it won’t see the light of day. Not, at least, without some form of serendipity or a uniquely deep-pocketed and patient project sponsor who isn’t counting on your project to keep the company afloat (aka Google).

If, like most innovation teams, you have finite resources and pressing timelines, experience says that a capability in hand is everything.

Finding valuable ways to bend existing assets and capabilities requires both intent and intensity. Fahrenheit partner Marcus Oliver has made it something of a personal mission to unlock the potential in this way of thinking as we try to build big ideas that work and deliver great ROI. A natural-born spotter of patterns, he traces his fascination with flexing capabilities back to a very accidental discovery on visits to the factory floor. It would prove to be another of those insights hidden in plain sight. He describes how these insights surfaced:

“To understand what we have to work with, we always try to make a factory tour part of the onboarding process on a new project, as anyone in innovation would or should. We found ourselves doing that one morning, looking sharp in white coats, yellow hard hats, steel-toed boots, and protective goggles, going machine by machine along a food company’s production line. I’ve loved machinery since I was a kid and still get a thrill every time I see a production line. We’re learning how the systems work and having fun doing it, and I’m asking goofy questions like ‘Hey, that machine over there that looks like a pregnant aluminum octopus . . . what does it do?’ Our host laughs and has an answer at the ready, something like ‘Oh, that’s a re-thermalizer that gets our cold-stored fresh ingredients to the same temperature as the ambient ones, so everything cooks at the same speed and comes out crisp and tasty.’

“The interesting bit is what happens next. I innocently ask her, ‘What else could that machine do?’ She seems surprised and sort of blushes. She thinks for a bit and says, ‘You know, I’ve been showing people around this factory for years, company execs, new marketing people, suppliers, even innovation teams like yours, but no one [has] ever asked me that. Let me ask Bob, maybe he knows.’”

Marcus goes on: “I don’t think much of it at the time, but on our next factory tour, this time for a technology company, there’s a similar thread—asking what various pieces of equipment do, getting solid answers, then asking what else they could do, and again hearing ‘Wow, no one ever asked me that.’ On the flight home that night it struck me that these innocent Q&As might be deeply meaningful. Maybe it’s just that those of us in innovation are suckers for hearing ‘no one has ever’ at the beginning of a sentence. But I had a feeling that we’d stumbled onto an underutilized lever capable of meaningfully lifting innovation project success rates.”

Nudged along by curiosity, and wanting to figure out how to put this realization to work, what Marcus did next was ladder up these very specific moments on the factory floor to the broader constructs of the innovation process.

Part of the realization was that across companies and industries, there’s a widespread tendency in current innovation processes that holds success rates down: innovation teams paying too little attention to, or even outright ignoring, the latent flexibility of their asset base.

How does it hold hit rates down? It increases the odds of innovations that require lengthy R&D explorations of new capability, new capital equipment, or new manufacturing methods to be executed, which increases the time and investment required to get innovations to market and puts downward pressure on ROI. If there is any certainty in this capricious pursuit we call innovation, it’s that the lower the projected ROI, the higher the odds of the project dying off with no products reaching market.

What is important to keep in mind is that these innovations that require new capability aren’t necessarily being put forward because they’re bigger opportunities than things that could have been born of flexing existing capability; rather, they’re put forward because they happen to be the ideas that surfaced from a conventional method. The opportunities that could be created by flexing existing capabilities have been given little attention. A healthy business moves forward, of course, leaping to new capabilities over time to deliver new value to the marketplace. Big ideas shouldn’t be rejected because they require new capabilities. They need an objective assessment of their long-term ROI. But a gold miner doesn’t dig a new hole every time he needs more gold. He mines the holes he’s already put in the ground for all they’re worth. Interestingly, making the case to management for why your company should add a new capability nearly always involves taking a long-term look at the flexibility that new capability will have. Ideally you should be able to say it’s not just about delivering this idea we have in hand, but it will open up all kinds of follow-on opportunities over time. Yet that orientation is too rarely applied retroactively to existing capability.

Copyright © 2014 by Mark Payne. Reprinted with permission of Crown Business, an imprint of the Crown Publishing Group, a division of Random House LLC, a Penguin Random House Company. All rights reserved.