As a child of the 1960s, I can’t resist reviewing Big Weed: An Entrepreneur’s High-Stakes Adventures in the Budding Legal Marijuana Business. But I won’t stoop to snickering references to nickel bags and Cheech and Chong bits that are as passé (and culturally obsolete) as my youth. Instead, I’ll let Hageseth pick up the slack for me. 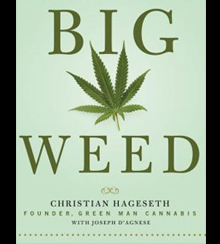 “I was baked off my ass,” recalls the self-styled “ganjaprenuer” of the time he worked his company’s booth at the 2012 High Times Medical Cannabis Cup in Denver. “Seriously, I’ve never been so high in my entire life. At one point I thought I was hallucinating.”

That’s not something that I ever imagined I’d hear a CEO say (let alone commit to print). But from Hageseth, the founder of Colorado-based Green Man Cannabis, it’s more like smart marketing than a stoner’s sketchy memories. Hageseth is on a brand-building mission that he compares to those of Ben & Jerry’s and Starbucks — two brands that got their start as alternative/counterculture businesses and have since become mainstream icons: “I wanted to win the minds, then the hearts, and finally the wallets of marijuana product and lifestyle consumers and become the most recognized brand of legal marijuana in the world.”

A couple of decades ago, such a business plan would have been written off as, um, a pipe dream. But according to Hageseth, business is booming at Green Man. The company grossed US$300,000 in 2009, the year he started the company, as a grower of medical marijuana. The business grew nicely, but really took off when the recreational use of marijuana became legal in Colorado in January 2014. Last year, the company grossed $4 million, mainly from two retail outlets in Denver — one of which is across the street from a Whole Foods Market. And after the Green Man Cannabis Ranch & Amphitheater, the first-ever “weedery” (think winery for weed), slated to open in the fall of 2015, has been up and running for a year, Hageseth says annual revenue will jump to $97 million.

Big Weed is an entertaining story of entrepreneurship with all the usual — and some markedly unusual — challenges. Hageseth’s company has the same talent woes as other startups: Green Man almost crashes on takeoff because he hires a master grower via Craigslist (where else?) who can’t quite comprehend the differences between growing marijuana illegally in a basement and growing it legally at scale in a 5,000-square-foot warehouse. Hageseth also has less-familiar problems: No bank wants to do business with a legal marijuana grower for fear of falling afoul of federal banking regulations. Technically, Green Man’s revenue is illegal drug money in the eyes of the feds. “Imagine having to pay huge bills in cash — amounts in the tens of thousands,” Hageseth writes.

But what’s really fascinating about Big Weed is the rare insider’s glimpse that it offers into a new industry emerging because of the decriminalization of its principal product. The ongoing, slow-motion legalization of marijuana is reminiscent of the end of Prohibition in 1933, but not exactly analogous. When Prohibition was enacted in 1920, it forced the nation’s large and long-standing beer, wine, and spirits industries into a hibernation, from which they quickly emerged upon repeal. Another difference: , when booze was decriminalized, it was in one fell swoop across the United States.

There was an existing weed industry long before medical marijuana was first legalized in 1996 in California. But most of the growers, smugglers, and dealers of illegal weed couldn’t just hang out signs and open their doors as legitimate businesspeople. As a result, the emerging legalized marijuana economy is an industrial greenfield.

Further, the path to marijuana legalization in the U.S. has been long, slow, and very fragmented, mainly because the federal government has been unwilling to take action. (Marijuana has been legalized for recreational use in just four states, and has been legalized for medical use in 19 others.) Nor are the feds likely to act anytime soon: First, bureaucracies don’t dismantle themselves, and after decades of prosecuting the so-called War on Drugs, the U.S. government has become host to a well-entrenched, multibillion-dollar bureaucracy that has little interest in ending the war. Second, after decades of demonizing marijuana, most elected officials do not want to set off a political firestorm among their constituents by spearheading or supporting the drive to legalization. The effort is thus proceeding haphazardly, on a state-by-state, medical-to-recreational basis that has led to an industry with hard geographic boundaries. If you want to sell legal weed in Hageseth’s home state of Colorado, you’ve got to move there. That precludes Big Tobacco and Big Pharma from jumping into the game in a big way.

This situation has created a golden window that Hageseth not only recognizes, but also is determined to exploit. Most of his existing competitors are small companies started by people who care more about primo bud than P&Ls, and the 800-pound gorillas can’t yet fit through the bars on the window. If Hageseth can establish Green Man Cannabis as a leading brand state by state (as new states embrace legalization), by the time the federal government follows suit, his company could be the de facto Philip Morris of weed.

In the meantime, Hageseth says, “The next time you’re in Denver, I’d welcome the opportunity to introduce you to our world. Book a long layover. The Green Man Cannabis Ranch will be waiting. I invite you to stop by and say high.”