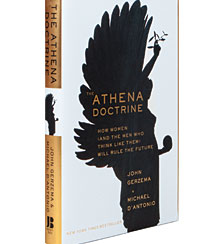 The Athena Doctrine: How Women (and the Men Who Think Like Them) Will Rule the Future

by John Gerzema and Michael D’Antonio,Jossey-Bass, 2013

Most of us are not happy with the state of world. At least that’s what John Gerzema and Michael D’Antonio conclude from their surveys of 64,000 people in 13 major countries. The surveys revealed widespread dissatisfaction among the respondents—who were chosen to mirror national populations—with how power is concentrated, resources are allocated, and decisions are made in their home country.

What are the drivers of this pervasive discontent? Government, the economy…oh, and apparently men. “A clear majority of people around the world are unhappy with the conduct of men,” declare brand consultant Gerzema and journalist and author D’Antonio. This includes 79 percent of people in Japan and South Korea and two-thirds of all people in the United States, Indonesia, and Mexico; the rate of dissatisfaction was nearly equal among men and women.

How should men act? Like women, according to the survey results. For example, 66 percent of respondents think that “the world would be a better place if men thought more like women.” A majority of the men surveyed expressed this view, and Japanese men reported the highest levels of conviction (79 percent). In addition, 65 percent of people from all 13 countries believe that having more female leaders in government would prompt a rise in trust and fairness, and a decline in scandal and wars.

“Thinking like women” is, of course, a highly ambiguous concept, so the authors then asked half of their global sample to identify 125 behavioral traits as masculine, feminine, or neutral. Perceptions turned out to be fairly consistent across countries and cultures. Respondents pegged traits such as dominance, aggression, decisiveness, ambition, and analytical orientation as masculine, and traits such as being community-oriented, social, supportive, intuitive, cooperative, empathetic, and patient as feminine.

Members of the other half of the sample were asked to correlate these different traits with leadership, success, morality, and happiness. In all four domains, feminine traits were ranked as more highly correlated than masculine traits. Morality and happiness showed the strongest relationship.

Clearly, we’ve come a long way since 1982, when Carol Gilligan’s highly influential In a Different Voice: Psychological Theory and Women’s Development (Harvard University Press) showed how decades of flawed academic research had resulted in the widespread perception that women, in addition to lacking leadership skills, were deficient in morality and ethics in comparison with men. The robust research tradition that started with Gilligan, along with changes in the nature of technology, the economy, and demographics, appears to have given at least a theoretical edge to leadership ideals of context and collaboration over the decisive, top-down approach associated with hierarchies and traditional male leadership models.

The widespread nature of this shift is documented by the authors of The Athena Doctrine, who begin by associating inclusive and cooperative approaches to leadership and organization with the Greek goddess of civilization and culture. These values contrast with those of Athena’s brother Ares, the dominant and aggressive god of war. The authors then set off on a world tour in search of examples of “Athena values” in action. Most of these examples—including social entrepreneurship, community building, social marketing, financing cooperatives, bottom-up support networks, and a host of other good works—prove to be engaging and inspiring, although sometimes less than convincing as proof of the authors’ thesis because of their anecdotal nature and their lack of scale.

The most compelling chapters in the book focus on countries in which systemic disruptions have spurred grassroots efforts to institute systemic change: Iceland in the wake of the financial meltdown, Israel after the intifada, Japan following the Fukushima Daiichi nuclear disaster, and Colombia recovering from the worst of the drug cartel wars. Although the authors’ examples of the efforts to rebuild damaged economies, ecologies, and infrastructures may seem at first to lack coherence, it soon strikes the reader that this may be precisely the point. After all, haven’t many of the large-scale interventions made throughout the 20th century proven destructive of community and sustainable livelihood in application?

In fact, the concept of making something bad a little better rather than seeking one heroic solution seems to define the essence of The Athena Doctrine and is indeed demonstrative of a less arrogant and elite-centric leadership model than the usual. It also provides an interesting counterpart to the “shock doctrine” described by Naomi Klein in her book of the same name, which details how the chaos that follows financial and economic disasters can be exploited by those seeking to impose control on struggling communities via clean-slate solutions. Gerzema and D’Antonio offer examples that are admittedly scattershot, but in doing so, they may provide us with a viable and valuable approach to creating change.