Getting to Yes with Yourself 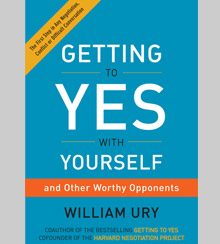 In 1981, William Ury coauthored Getting to Yes: Negotiating Agreement without Giving In (with Roger Fisher; Bruce Patton, ed., Houghton Mifflin), the seminal text on the art of negotiation. The book has sold millions of copies and has been translated into at least 36 languages. The New York Times has dubbed it “the classic work on negotiating.”

Since then, Ury — who cofounded the Harvard Negotiation Project — has followed up with related works on haggling strategy, including volumes such as Getting Past No (Bantam Books, 1991) and The Power of a Positive No (Bantam Books, 2007). The latest in this series, released earlier this year, is titled Getting to Yes with Yourself [and Other Worthy Opponents] (HarperOne). This time, instead of examining the adversary across the conference table, Ury suggests you turn the focus to a “worthy opponent” you’ll face every time you try to make a deal: yourself.

Novices tend to imagine that good negotiation technique involves using aggressive tactics to dominate your foe. But as Ury’s work has made clear from the outset, effective negotiation isn’t simply a battle of wills. Rather, it is a nuanced psychological give-and-take. The best negotiators work from a place of profound empathy. When opponents make a specific demand (for, say, a higher salary), these negotiators ask questions and listen closely to determine whether the opponent’s deeper underlying motivations (such as a desire for respect and security) might be satisfied through other means.

In Getting to Yes with Yourself, Ury shifts the spotlight onto our own underlying interests. It’s all well and good to discover what makes our opponents tick. But we get much better results when we understand our own needs, too. Have you thought in depth about what it is you crave? Do you “put yourself in your own shoes first,” as Ury suggests, before you come to the negotiating table? Can you master your emotions so they won’t get in the way of a healthy, collaborative deal-making process?

Ury advises a regimen of introspection. When you find your feelings rising uncomfortably during a negotiation, don’t beat yourself up about it. Instead, observe those feelings and ask yourself what they reveal about your deeply held desires. He suggests metaphorically going to the “balcony” of your mind to look down serenely on that jumble of fear, longing, and envy that sometimes fills your brain. It’s only when you know what will bring you true happiness within the context of any given negotiation that you can effectively maneuver the odds in your favor. “Listening to yourself can reveal what you really want,” writes Ury. “At the same time, it can clear your mind so that you have mental and emotional space to be able to listen to the other person.”

When we unpack our own psychological baggage before we bring it to the table, we assure ourselves that it won’t distract us at key moments. Freeing ourselves from resentments about our past dealings with other people or anxieties about future dealings lets us stay in the present and be more alert to its possibilities. Ury uses an example from a meeting he had with former Venezuelan president Hugo Chavez during a tense political crisis in Caracas. Because Ury strove to be present in the moment — instead of imposing his preconceived notions on it — he says he was able to “let the conversation unfold naturally,” eventually recognizing a perfect opening to help Chavez see the situation in a different light. “I have been in so many negotiations where one party signals an opening or even makes a concession,” writes Ury, “and the other party does not notice it. Whether it is a marital argument or a budget disagreement in the office, it is so easy for us to be distracted.”

The anecdote about Chavez is only one of many remarkable experiences Ury draws on in presenting his ideas. “In the mid-1980s,” he recalls in one example, “I helped facilitate a series of conferences between top Soviet and American policy advisers on the question of how to prevent a nuclear war.” This is reassuring. Surely, we think, if this man can help avert a nuclear holocaust, he can help me figure out how to ask for a promotion.

Surely, we think, if this man can help avert a nuclear holocaust, he can also help me figure out how to ask for a promotion.

Some of Ury’s advice does feel more like an encouraging chuck on the chin than like strategic counseling. For instance, if you’re unable to strengthen your bargaining position in material terms, he suggests at one point, you should just convince yourself to feel internally better about your lot. If you don’t like the outcome you’re faced with in a standoff, he advises elsewhere, just “reframe your picture” and “remember your connection to life.” These are happy thoughts, though they might be of little solace to the person who just paid more than she’d hoped to for a used car.

Still, I admire Ury’s heartfelt attempt to espouse a more thoughtful approach to negotiation (replete with quotes from philosophers such as Ludwig Wittgenstein and Michel de Montaigne, and references to harrowing health crises faced by Ury’s own daughter). For years, the lines have been blurring between no-nonsense business tomes and fluffier self-help manuals. Getting to Yes with Yourself combines smart business insights with a dollop of self-help advice.  For some people, it might be just what the therapist ordered. A little introspection won’t hurt you — even if you’re doing it only because you hope it’ll get you a raise.