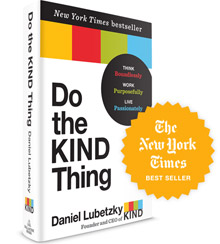 As Daniel Lubetzky, the founder and CEO of KIND, a fast-growing purveyor of snack bars, explains in his new book, Do the KIND Thing, the company aspires to be “not just a great brand and product, but also a movement, a community, a state of mind.” Its goal is to “inspire kindness in an authentic and effective way.” The company recruits KIND ambassadors, tweets about KIND acts, raises money for charities, and seeks to initiate “chains of kindness” by giving out black plastic cards with unique codes that invite people to join a “secret society of people doing kindnesses to one another.”

“You can be happier by being nice to one another,” Lubetzky writes. Who knew?

I’m no cynic. I’ve reported on corporate responsibility and sustainability for years. I believe that the claim that companies can do well by doing good is, like most clichés, mostly true. But although I’ve consumed my share of KIND bars, I’d never heard of the KIND movement until I read Lubetzky’s book. The “secret society” of people doing kindnesses remains, in my view, a well-kept secret. The company says it has “performed, facilitated and celebrated 1,000,000 kind acts” even as Lubetzky acknowledges “probably less than one percent of our consumers had ever heard of that part of our social mission.”

So what’s the point? The point is that you can build a company that is kind to its workers, its distributors, and its investors. And Lubetzky explains how in this useful guidebook. Of course, it’s also essential to create and market products that people like. As he acknowledges: “First and foremost, the product must stand on its own.”

You can build a company that is kind to its workers, its distributors, and its investors.

KIND was no overnight success, and its founder took an unconventional path to entrepreneurship. The son of a Holocaust survivor, Lubetzky grew up in Mexico, graduated from Stanford Law School, and left a prominent Wall Street firm to start a company called PeaceWorks in 1994. He sold Dead Sea cosmetics and Mediterranean snack spreads under the Moshe & Ali’s brand out of his studio apartment in Manhattan; his purpose was to promote Arab–Israeli cooperation (a goal he continues to pursue through the nonprofit One Voice). The company never really took off. But Lubetzky learned from his many mistakes, which make for entertaining reading. In one scene, Saul Zabar, an owner of the eponymous Upper West Side gourmet paradise, tells him: “You have no idea what you are doing.” Lubetzky himself describes his company’s lack of focus as “insanely dumb,” but says that he can “trace every one of my accomplishments to earlier failures.”

In 2004, Lubetzky launched KIND. Its main product was fruit-and-nut bars, originally imported from Australia. Although the mission of promoting a kinder world meant a lot to anyone who worked at KIND or did business with the company, he says, KIND’s consumer marketing focused on people in search of a healthy, tasty snack made from ingredients they could pronounce. “We drive our sales by focusing on being number one in how we solve the needs our consumers have,” Lubetzky writes.

Whether KIND bars are, in fact, healthy is a matter of debate. The Food and Drug Administration warned the company in March that some of its products, including KIND Fruit & Nut Almond & Coconut and KIND Plus Peanut Butter Dark Chocolate & Protein, fail to meet the government’s requirements for use of the nutrient content claim "healthy” because they are high in fat. On its website, KIND said it would adjust the labels but noted that nuts, which are high in fat, “are generally considered to be good for you like avocados, salmon, and eggs.”

Do the KIND Thing is organized around the principles that built KIND, devoting chapters to purpose, truth, transparency, empathy, trust, and ownership, among others. They are more than feel-good bromides at KIND.

Transparency, for example, is embedded in the company and products. KIND introduced transparent wrappers to the nutrition bar sector, to showcase what Lubetzky calls “the artisanal look of whole-nut-and-fruit bars.” The company’s products get simple names — Dark Chocolate Cherry Cashew instead of, say, Black Forest Cake Supreme. Its advertising avoids stylized images, instead showing the product as it is.

Executives are open with workers, and they expect the same in return. No one is summarily fired, except for serious misconduct, and KIND typically promotes from within. For their part, team members (as employees are called) are expected to tell their supervisor if they want to move on; the company works with them, helping them to find a position inside or outside KIND, and asking them to help interview, hire, and train their replacements.

Lubetzky is not an imperial CEO. He’ll carry boxes of KIND products into a trade show booth, against the advice of those who told him that it was “un-presidential.” He explains how he has had to work hard to delegate authority and trust others, not an easy thing to do for most founders. He tries to keep quiet during meetings so that others feel free to speak out. “Learning how to contract your power and personality is of incredible importance,” Lubetzky writes.

When investment bankers recommended that KIND sell its shares to the public, Lubetzky declined. He didn’t want to be distracted by Wall Street’s expectations of quarterly earnings growth, he says. And, perhaps surprisingly, he worried that “our shares would invariably skyrocket beyond any sensible or sustainable number” and cause foolhardy investors to lose their money when they crashed. Instead, KIND borrowed money to repay its private equity investors and created a program to buy back employees’ stock.

KIND is growing fast, but it remains small, especially when compared to snack food giants such as Frito-Lay. The company does not disclose revenues or profits; it sold about 458 million units in 2014 and employs fewer than 500 people. By contrast, Frito-Lay employs 50,000 and had US$13 billion in revenue that year.

Lubetzky concludes by writing that he wants KIND to become “a movement that millions of our community members feel ownership of.” That’s admirable and refreshing, if clunkily phrased. But it may not be the most appropriate mission statement for a consumer products company, which has to meet the more prosaic needs of a host of stakeholders. The work of teaching people to be kind is probably best done by teachers, parents, and clergy, not by a snack food company. Building an enterprise that treats people well — and makes products that people enjoy — should be its own reward.