“Is there a manager in the house?” Like a theater owner faced with a sudden medical emergency, Nissan sent out a call for help in 1999. The Japanese automaker had exhausted its strategic and managerial resources and desperately needed a global partner and a new chief executive officer. The call was answered by Renault and Carlos Ghosn, the company’s second-in-command and its Mr. Fix-it — Le Cost Killer, as the French labor unions had begun to call him.

Mr. Ghosn is the ultimate outsider’s outsider. A polymath speaking several languages, he was born in Brazil to Lebanese parents. In his business career, Mr. Ghosn has brought a dispassionate, analytical approach to each managerial problem he has faced. In Shift, Mr. Ghosn gives us a thumbnail autobiography and tells the story of Nissan’s turnaround.

It is generally acknowledged that the best development experiences for managers are tough assignments, demanding bosses, and hardships; Mr. Ghosn certainly seems to have experienced all three. He describes spending the first 18 years of his business career at Michelin, the French tire maker, where he handled a broad range of challenges, including a seven-year stint in the United States integrating the newly acquired Uniroyal-Goodrich operations. At Michelin, we see him pioneer an approach to cross-functional teamwork, and to the rationalization of manufacturing operations, that would stand him in good stead later. When he takes the helm of Nissan in 1999, it’s clear that Carlos Ghosn has been training all his life for this job.

Crisis may not be essential for organizational change, but it is certainly a powerful catalyst. For managers reading about turnaround artists in such situations, there is a certain vicarious thrill: You are the company surgeon; all the stakeholders are finally ready to change; the status quo is no longer tenable, and all the old arguments for its maintenance have been blown away.

It will be interesting to see whether Mr. Ghosn, now elevated to the position of CEO of Renault (while keeping his chairmanship of Nissan), can produce the same magic in a larger organization where a similar sense of crisis is not present. 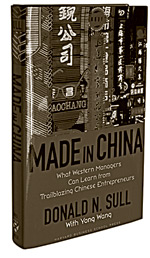 Donald N. Sull is an associate professor of management practice in strategic and international management at the London Business School. In Made in China, he and his research assistant, Yong Wang, chronicle the emergence of eight Chinese companies and the stories of the entrepreneurs who founded them. The firms were selected from four industries: information technology (Lenovo and Sina), telecommunications equipment and services (UTStarcom and AsiaInfo), “white goods” (Haier and Galanz), and food and beverage (Wahaha and Ting Hsin).

Chinese companies face a variety of risks: unpredictable regulation and industrial policy; unclear and shifting property rights; and unreliable access to global markets and capital. This dynamic context requires a mode of operation that does not fit neatly into the management frameworks developed in more stable economies. Professor Sull uses each of his examples to illustrate an alternative framework called the Sense-Anticipate-Prioritize-Execute (SAPE) cycle. Rather than trying to predict the future, the entrepreneurs focus on rapidly responding to and learning from each unfolding situation, cycling through the process faster than their competitors. Although no single move is decisive, over time the faster learner builds an unassailable advantage.

The stories of Chinese entrepreneurs are compelling and topical, and the SAPE framework is a useful reminder of the significant limitations to the predict-plan-implement sequence commonly found in the strategy literature. The entrepreneurial process could, of course, just as easily be illustrated using stories of American entrepreneurship. Bill Hewlett and David Packard, for example, were fast learners who were pleased to tell their story of failure and improvisation to anyone who would listen — much to the chagrin of the business school professors who had invited them into their classes expecting to hear a tale of insightful planning and programmed implementation. 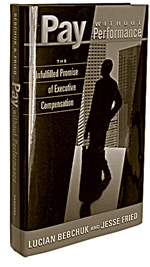 Pay without Performance is a dense but highly readable guide to the morass that is executive compensation in the United States, together with suggestions on how corporate America can extricate itself from the swamp.

Lucian Bebchuk is professor of law, economics, and finance and is director of the program on corporate governance at Harvard Law School; Jesse Fried is professor of law at the University of California at Berkeley. They begin by outlining the conventional method of setting executive compensation — boards of directors bargain with executives at arm’s length — and the prevailing view that market forces (the value of executives in an era of low supply and high demand) determine the levels of compensation reached. They contrast this view with their own contention: that executives, particularly CEOs, tend to use their managerial power to extract excessive compensation from corporations. In 16 chapters, Professors Bebchuk and Fried meticulously strip away the camouflage and deception that conceal the myriad ways in which executives are paid.

Although one might dispute some individual issues in the authors’ argument, the overall picture is devastating. “Market-based compensation” seems to be merely a convenient fiction that CEOs and boards of directors use to justify the status quo.

On compensation, Pay without Performance recommends changes to reduce windfalls in equity-based pay plans: filtering out industrywide and marketwide gains; improving the links between bonus plans and performance; avoiding “soft landings” in the event of failure; and quantifying and making transparent the magnitude of pay that is unrelated to performance. Shareholders, they argue, should have a much more direct say in compensation matters. Further, the corrupting influence of the “free money” that is share options should be eliminated through a requirement to expense such options. On corporate governance, the authors believe much can be done to revitalize corporate elections, making the selection and appointment of directors more dependent on shareholders. The vigorous objections of corporate interest groups to even the mild reforms currently being proposed by the Securities and Exchange Commission suggest that the road ahead will be difficult. Professors Bebchuk and Fried have written a book that provides a compelling case for making the journey. 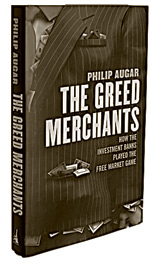 Are investment bankers responsible guardians of free-market capitalism? Or are they a force of evil — a greedy conspiracy, with a long, checkered history of mouthing the virtues of the marketplace while doing their best to subvert its functions?

According to industry insider Philip Augar, the former head of Schroder Securities in the United Kingdom and now a full-time writer, the answer to both these questions is “Yes!” In 12 chapters, he reviews the history of the industry, chronicles the litany of abuses with which it has been associated, tries to identify how investment bankers really make their money, and suggests how the conflicts of interest endemic to the industry might be ameliorated.

Mr. Augar admits that trying to find exactly where investment bankers make their money is like chasing a bar of soap in a bathtub. But he points out some clues: Investment bankers are continually trying to de-emphasize commodity-type products such as equities, fixed-income securities, and common derivatives in favor of high-value-added offerings such as complex derivatives, sophisticated financings, and merger and acquisition work.

At the core of investment bankers’ ability to make themselves fabulous amounts of money is their immersion in the flow of markets, where their special access to information and their ability to “connect the dots” creates what Mr. Augar calls “The Edge” — a unique blend of knowledge and integration that also creates a formidable barrier to entry for would-be competitors. The other side of this spinning coin, however, is multiple conflicts of interest, including the glaring disconnect between dispassionate investment analysis and the bidding for lucrative initial public offerings, and the daily clash between the banks’ proprietary trading and the need to execute client orders. The author suggests that without the complete separation of advice from execution — both in securities trading and securities distribution in capital markets — these conflicts will continue. He also sees further trouble ahead, perhaps triggered by the complexity of poorly understood derivatives.

David K. Hurst (david@davidkhurst.com) is a contributing editor of strategy+business. His writing has also appeared in the Harvard Business Review, the Financial Times, and other leading business publications. Mr. Hurst is the author of Learning from the Links: Mastering Management Using Lessons from Golf (Free Press, 2002).