Power: Why Some People Have It — and Others Don’t

Power is a prerequisite of management, but business schools mostly subscribe to the belief that knowledge should be the only form of power. As a result, other, more primitive types of power are rarely taught explicitly. Jeffrey Pfeffer’s popular elective course “The Paths to Power” at Stanford University’s Graduate School of Business is a notable exception to the rule. And in Power: Why Some People Have It — and Others Don’t, the Thomas D. Dee II Professor of Organizational Behavior offers a look at how he prepares MBAs to get and use power.

Pfeffer’s opening proposition is that although we might wish otherwise, the world is an unfair, unjust place, where raw power trumps performance, self-promoters get rewarded, and most people look out for number one. If that’s the case, the author argues, aspiring managers should get over their qualms about being seen as manipulative, learn the principles of power, and exercise them in the pursuit of their personal advancement. In his view, much of the existing leadership literature is unhelpful in this regard, because it deals with what leaders ought to do rather than what they actually do. 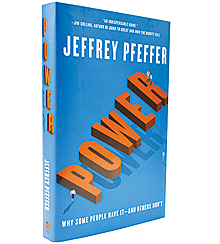 In 13 chapters, Pfeffer lays out in exemplary fashion the steps to obtaining and practicing power, buttressed by sound management research. He demonstrates the weak link between performance and job outcomes, and their loose correlation with intelligence. He shows that flattery is an effective strategy for gaining influence and cites examples of those who have used it constantly to advance their careers.

Accumulating power takes will, in the form of ambition, energy, and focus, and skill, in the form of self-knowledge, confidence, empathy, and the ability to persist through conflict, according to Pfeffer. He cites President Barack Obama’s former chief of staff, Rahm Emanuel, as an example of someone having this final skill. Emanuel’s take-no-prisoners style and volcanic tirades effectively intimidated opponents and advanced his agenda.

Pfeffer also shows why managers must use care in choosing the functions in which they work, ensuring that they are critical to the organization at that time. No power seeker can flourish in a backwater. The author explains why it helps to be physically located close to the powers that be and gives instructions on how to make better use of resources, build social networks, and so on.

It is difficult to disagree with the steps Pfeffer outlines. It seems likely that a manager who followed them and practiced the recommended behaviors would accumulate power within an organization. But what’s missing is any sense of a value system and of the distinctions among different kinds of power. As a result, in his advocacy of realpolitik, Pfeffer comes perilously close to endorsing a kiss-up/kick-down style of management.

There are some largely unanswered questions here, such as, What are the costs of top-down, power-based management, and to what ends will power be used? Just one chapter is devoted to the personal costs associated with the pursuit of power, including a short section on its addictive nature. Compared with its pleasures, however, the downside to the pursuit of power sounds rather mild — like an addiction to chocolate. Pfeffer mentions one potential drawback for organizations with overt cultures of power: Their leaders become invested in the status quo and crush creativity and innovation. But he does not fully consider the implications of that pattern for organizations, let alone societies. As for whether the pursuit of power is good for organizations, Pfeffer writes, “I’m not sure you should worry about the effect of your behavior on the organization, because there is lots of data to suggest that organizations don’t care very much about you.”

Power is a how-to manual addressed to an elite, and its lack of balance between means and ends exposes all management academics to the risk of being seen as what historian Loren Baritz called “servants of power” — people who offer powerful tools without concern for the ends to which they are put. In preparing managers to be rulers of hell, this provocative book is an antidote to the Panglossian preaching of so many gurus that counsels them, in effect, to be servants of heaven. If the management academy’s mantra, like that of the medical profession, should be “first, do no harm,” this medication, without more careful prescription, needs a warning label.