Masters of Management: How the Business Gurus and Their Ideas Have Changed the World — For Better and for Worse 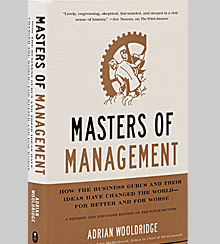 Masters of Management: How the Business Gurus and Their Ideas Have Changed the World — For Better and for Worse is an update of The Witch Doctors: Making Sense of the Management Gurus, which Adrian Wooldridge, management editor and columnist of the Economist, wrote in 1996 with John Micklethwait, who contributed only the foreword to this volume. As Micklethwait points out, the original book emphasized the dark side of gurus, whereas the revision stresses their more positive aspects. But the objective of the book is unchanged: to serve as a useful filter of management ideas and to give an overview of what has become a huge industry.

Like its predecessor, Masters of Management covers a lot of ground. It begins by chronicling the latest business fads. Today, corporate social responsibility is all the rage, and Wooldridge takes a dim view of it, describing CSR as a “feel-good mishmash rather than a coherent position.” He believes that like reengineering, the fad du jour last time, CSR will lose its momentum and then recede from the corporate zeitgeist, perhaps leaving behind some valuable insights “gaining in realism what they are losing in luster.”

The book profiles gurus, adding some new recruits to the court of Peter Drucker and the cult of Tom Peters this time around. The newcomers are mainly “journo-gurus,” such as New York Times journalist Tom Friedman, New Yorker writer Malcolm Gladwell, and Wired editor Chris Anderson, and academics, including Robert Reich, Richard Florida, and Howard Gardner.

Masters of Management also tracks three “management revolutions” and the major debates in business. The first revolution is the overthrow of “Sloanism,” which Wooldridge says is marked by the passing of the large hierarchical structures pioneered by Alfred Sloan at General Motors Company. The second is the intellectual recognition that Joseph Schumpeter’s gales of creative destruction are blowing strongly in the West and that entrepreneurialism really matters. The third is the rise of the East and the charms of concepts that are accompanying it, such as “frugal innovation,” which overturns the conventional wisdom about how organizations should pursue the launch of new products.

The major debates have changed somewhat since The Witch Doctors. Wooldridge discusses talent (how to manage “clevers”), strategy (pull, not push), and globalization (the world isn’t really flat) in effective but summary fashion. In the boardroom, the debate concerns the end of “Jack Welch capitalism” (that is, capitalism based on maximizing shareholder value), even though Welch himself now describes the concept as “the dumbest idea in the world.” Wooldridge, however, argues that the loss of clarity of shareholder focus could lead to a loss of capitalistic clarity.

Finally, the author turns to the future of work and careers. In his opinion, the “war for talent” is alive and well and going global. He asserts, rather unpersuasively, that the outsized compensation earned by those at the top reflects a normal bell curve distribution and the higher returns that accrue naturally to greater knowledge and ability. He does not point out that the curves are different in Japan and Europe, where executives earn much lower multiples of their workers’ wages. The idea that executive earnings, particularly in the U.S., might be the result of power curves and amenable to intelligent regulation is not addressed.

In all, Wooldridge’s conclusions are not very different from those of 15 years ago: Management theory has been an enormous commercial success, and it is a mélange of genuine insight, substantive scholarship, and charlatanism. In Wooldridge’s opinion, the field has produced only one great thinker — Peter Drucker — and is still waiting for its Joseph Schumpeter or John Maynard Keynes. This wish betrays the economic biases in the book and its faith in “whip-smart” intellectual talent to show the way ahead. But it doesn’t acknowledge that over the past few decades some talented people have used economic frameworks to do significant harm to management theory and practice. Perhaps the field doesn’t need a Schumpeter or a Keynes as much as a Galileo, who could put societies, communities, and perhaps even the planet at the center of the management universe.