The Wall Street Journal Essential Guide to Management: Lasting Lessons from the Best Leadership Minds of Our Time 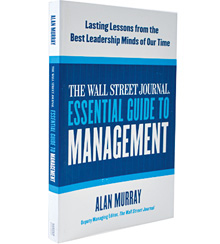 The Wall Street Journal Essential Guide to Management, by WSJ deputy managing editor Alan Murray, is a helpful distillation of current management thought, at least as expressed by senior executives of large American organizations. Positioned at what the author calls “the end of an era,” a conservative politico-economic cycle that began with Thatcherism and Reaganism, the book sets out to be a simple guide to the best management practices. With Murray’s high vantage point and WSJ’s unparalleled access to CEOs, it is also a valid snapshot of what top managers currently say they do, although that is, as Pfeffer points out in Power, not necessarily what they actually do.

The book is well laid out in 12 chapters, each with a helpful summary. They cover a broad range of topics: management, leadership, motivation, strategy, execution, teams, change, going global, ethics, managing yourself, and more. The author even devotes a chapter to financial literacy, outlining the basics of the balance sheet, income statement, and cash flow; its inclusion suggests that the book is aimed in part at readers who have not had formal training in business finance. For the most part, the excerpts and paraphrased content cover the North American stalwarts, with Peter Drucker’s work seen as foundational, and academics such as Michael Porter and Clayton Christensen, business practitioners such as Jack Welch and Larry Bossidy, and consultants such as Tom Peters and Jim Collins providing the superstructure.

Murray does not always reconcile the differences among his subjects. He makes a distinction between managing and leading and suggests that effective leaders must be humble and willful at the same time. He also invokes both Theory X and Theory Y in the discussion of human motivation.

Unfortunately, where contradiction might be most useful — strategy — the book is too homogeneous. Although the chapter on strategy features sources as diverse as Sun Tzu, Michael Porter, and Chan Kim and Renée Mauborgne, the idea that strategy is consciously formulated predominates. There is no mention of the importance of learning and emergent strategy.

The book has other weaknesses. Relationships among team members are discussed in the either/or language of the marketplace, with recognition and meaning treated rather strangely as the “least costly” forms of currency. One whole chapter is devoted to ethics and cites the prevalence of unethical managerial behavior, ranging from corporate-funded golfing junkets to the backdating of stock options. But Murray largely ignores the systemic causes of such behavior. On the vexing issue of soaring executive pay, he questions market-based justifications and points to a few systemic sources of the problem, but instead of suggesting solutions that address them, he concludes, rather weakly, that executives should exercise some restraint to forestall political action.

The book concludes with an excellent chapter on management as a calling and the importance of continuous learning. Murray contends that one of the “great conceits” of the 20th century is that human behavior and institutions can be understood via the methods of the physical sciences. Yet despite the fin de siècle preface, the implications of this conclusion for neoclassical economics and its management frameworks are not discussed, and the author offers no suggestions as to how management could be better understood using the social sciences. Perhaps it’s a larger conceit that the essentials of management can be addressed from the narrow popular base selected by the author.

Topics: training, execution, ethics, academics, motivation
Get s+b's award-winning newsletter delivered to your inbox. Sign up No, thanks