The collapse of several dot-com enterprises in recent months was not treated as a news event. It was, instead, a celebration. Commentators and reporters could hardly contain their glee over the failures. After all the excitement about our brave new cyberworld, a sigh of disappointment, even empathy, would have been appropriate. We are seen, with some justice, as a nation that thrives on change, proud of our pantheon of risk-takers. So why was there even a hint of exultation? 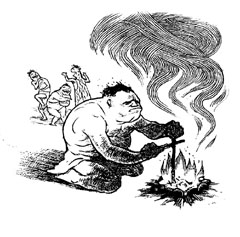 A quick answer is that change always breeds Cassandras. Far from being a new character in the business chrestomathy, the professional nay-sayer has always been around and has always had a vested interest in exploiting every ounce of vindication that comes along. Schadenfreude, too, is hardly a new emotion, and envy has a potent logarithm in the perception of wealth too easily acquired. "Hey, these dot-commers had all that capital behind them, they stood a chance of getting rich without much sweat, and all they had was an idea anyone could have had. An idea! The effrontery of it!"

The study of innovation in which I have been engaged for the past year suggests there is nothing quite so much scorned and resented as an idea that may change a familiar world, especially one that flies in the face of received wisdom. Hell hath no fury like an expert betrayed by the preferences of ordinary people.

That has been a historic pattern. James Rumsey and John Fitch were ridiculed for dreaming of navigating by steam, DeWitt Clinton for undertaking to "cut a big ditch" from Albany to Lake Erie at Buffalo, the citizens of Dubuque for advocating a railway line to the Pacific. The latter bludgeoned their skeptical congressman, George Wallace Jones, to petition Congress for a survey. He, poor fellow, was hooted down in Washington, "members singing out to me that it would not be long before my constituents would ask Congress to build a railway to the moon."

We look back now with condescension on those politicians who had so little faith in America's engineering genius — 10 years later Congress was eagerly debating four transcontinental routes — but the experts are even more touchy today. America Online Inc., for instance, may be the flavor of the month, but only because Steve Case didn't lie down and die when he was told to. Wall Street analysts, computer industry experts, technology writers, and consultants all predicted that AOL would not survive the advent of the Web. Wired consigned online services to the scrap heap of history: "They are a dinosaur," the bible of the digerati declared. The brilliant author James Gleick was just as sure. Paul Saffo, director of the Institute for the Future, a California think tank, said, "Silicon Valley was completely puzzled as to why anyone would still continue to go to AOL." Steven Levy of Newsweek wrote that online services "look a lot like dead men walking." The business media excoriated AOL for conducting a risky expand-at-all-costs strategy.

It is true the real difficulties of AOL's roller-coaster startup merited skeptical and probing questions, but the questions Mr. Case got were unrelievedly negative and cynical, which is very different. To be called the "digital Dracula," the "Lazarus of the online world," the "cockroach of cyberspace," etc., suggests hysteria removed from constructive analysis.

Jerry Yang and David Filo, the innovators who created Yahoo Inc., got the same kind of treatment. As recently as 1997, Christopher Byron, a New York Observer columnist, awarded Yahoo first place in his "cybersucker's index." Those cybersuckers who took flight saw the company's net rise from $1.5 million to $143 million, mostly through an increase in ad sales and investment income, and watched from the sidelines as the company's stock market valuation rose to $70 billion.

Blame the Press
Of course, as Yogi Berra noted, it's tough to make predictions, especially about the future. Even Thomas Edison, as farsighted as anyone today, was confident in 1913 that "the talking motion picture will not supplant the regular silent motion picture. There is such a tremendous investment to pantomime picture that it would be absurd to disturb it..."

Edison can be forgiven. After all, he did invent the phonograph, and he was at the forefront of projection systems as early as 1889. What is harder to take today is the appetite for negativism about business among reporters who have never invented anything more than an expense account.

Several things seem to be going on. Reporters, including formerly dispassionate business reporters, today report less and comment more. We also have a generation that is a sucker for the unattributed source. Having been in journalism for 40 years, and at the sharp investigative end, I know full well there are good reasons that whistle-blowers like Jeffrey Wigand of Brown & Williamson Tobacco Corporation and The Insider fame deserve anonymity. That is armor for a hero, but more often nowadays it is camouflage for a coward.

Every day I read hostile business stories obviously planted by competitors on reporters who are either too gullible or too eager to shed blood. Time Warner's Entertainment Weekly magazine had to endure that for a couple of years into its launch in early 1990, when even its colleagues down the corridor at People magazine wished it ill, fretting that if Entertainment Weekly got going it might cut into People's success.

The decline in standards of objectivity is demonstrated by the proliferation of the unsourced quote. When you read "friends/industry sources/informed observers said," you know it is an invitation to a wake. Once upon a time The New York Times would not print pejorative quotes from unnamed sources. Now it does. The Associated Press and U.S. News & World Report still hold the line, but few publications bother.

The slide in standards is aggravated by our celebrity culture. Big names become big targets: David's PR problems began as soon as Goliath's ended. The press likes to see the mighty fall, and feels especially vengeful when some celebrity it has inflated runs into a little local difficulty. It also expects instant miracles from well-known names, which makes for impatience and distortion.

What unsophisticated critics invariably fail to appreciate is that innovative enterprises, by definition requiring some new marriage of technical skills and organization, rarely spring fully formed from the minds of their creators. The historical evidence is that almost all innovations need a chance to breathe and to experiment, not to have their roots inspected every five minutes.

The DreamWorks Model
DreamWorks SKG is a classic case. Nobody in 50 years had attempted to start a new studio and go simultaneously into live action, TV, animation, and music, as did Stephen Spielberg, Jeffrey Katzenberg, and David Geffen, with backing from Microsoft titan Paul Allen.

The reception was ecstatic, the recoil premature and excessive. "This is a town," remarked Mr. Katzenberg, "where everyone wishes everyone else will fail, and if you die in the process that's even better." The main criticism, stealthily encouraged by competitors, is the vague one that DreamWorks has not lived up to expectations. DreamWorks no doubt has had its disappointments in TV and music, but in the judgment of Peter Bart, the editor-in-chief of Variety, "The press has seemed more eager to flag DreamWorks' problems than its accomplishments." Mr. Bart himself then went on to wonder if the company could survive, sandwiched as it is between mighty major studios and the lean-and-mean independent studios. The Los Angeles Times went further, pronouncing the stand-alone production company not viable.

Yet the innovative DreamWorks may have found a different economic model. It has gone into partnerships with the majors, as it did with Saving Private Ryan, Deep Impact, and Gladiator; the naysayers can say nothing about those hits or the multiple Academy Awards for American Beauty. The species that is almost extinct is not the new stand-alone studio; it is the critic willing to eat crow.

There may be another undercurrent to the fashionable negativism. The fear of innovation has been with us since Fred Flintstone made fire, but in recent years — certainly in recent months — the news media have grown particularly inflamed about the transformations of business structure. This is most evident in news media coverage of the media business itself. The communications industries — film, music, television, advertising, etc. — have been following a strategic path toward increasing interindustry synergy since the late 1980s. Synergy was a rationale for Entertainment Weekly, the first national weekly to combine coverage of all aspects of the entertainment industry under one cover. DreamWorks united the talents of three gifted executives in music, film, and animation. AOL has formed strategic enterprises with some of the most powerful companies in the United States; its takeover of Time Warner is only the latest example. Yahoo has become the de facto one-stop shop for the Internet, its very raison d'etre being to create synergistic linkings of Web sites and information.

The media's path toward strategic synergy, though, has been accompanied by relentless journalistic opposition. The famous brands of and personalities behind such companies are bull's-eyes. Ken Auletta was re-vealing in a New Yorker article in 1995. "Synergy," he wrote, "implies that one plus one will add up to four. This is the new math of the business world. Sometimes it adds up, as it has for the Walt Disney Company. But Disney's experience is unusual. There is scant evidence that synergy works as promised." Then he added the kicker: "What is already apparent is that 'synergy' is rarely journalism's friend."

Whatever the motives behind the attacks, the facts support the media industry's innovative designs. Entertainment Weekly, buried at birth by The Boston Globe as Time Warner's "disaster of the moment," generated $206 million in revenue in 1999, its one-million-plus circulation rising 23.9 percent — the only consumer magazine to match the business-magazine boom. Time Warner's investment of $150 million will pay off, a just reward for faith and hard work. Those people writing off AOL in 1993 were not in a hurry in 1998 to admit that $10,000 invested then had become worth $848,560.

Reflecting on the drumbeat of opposition that typically accompanies innovation, I have come to think that the innovator's backbone may be as relevant as the inventor's cerebrum in fostering inventiveness. Lee Iacocca, as tough as they come, said that if he had the slightest idea of what was ahead of him when he joined up with the Chrysler Corporation, he wouldn't have gone there "for all the money in the world." That would have been a loss for us all, as it would have been if Al Neuharth had run away from USA Today or Ted Turner from CNN.

Today, innovators need even thicker skins. Good thing they're bred with them.

Topics: innovation, experts, authors, innovators, brain
The business insights you need to succeed. Get s+b’s best ideas delivered to your inbox twice a week.
Sign up         No, thanks