By all traditional metrics, Coca-Cola Company is one of the world’s most successful businesses: a century of growth, a market cap of more than US$181 billion, a truly global footprint, and one of the world’s most recognizable and valuable brands. But Bartow J. Elmore, an environmental historian at the University of Alabama, would have us believe that the company’s success is illusory. 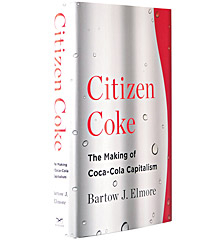 In Citizen Coke, Elmore argues that Coke’s brand and profitability are built on the backs of other companies, independent bottlers, agricultural suppliers, public infrastructure, and fragile ecosystems. Worse, he charges, the company’s success is based on relentlessly promoting overconsumption of a product that is not only nonessential but harmful to the environment and the people who consume it.

Elmore’s provocations are controversial and worth examining, and their implications go far beyond the beverage industry. For instance, the history of Coca-Cola’s reliance on public water works, in the United States and abroad, could and should inform current debates about true-cost accounting. Likewise, the discussion of Coca-Cola’s links to poor labor conditions in its agricultural supply chain and its implications in the world’s growing obesity problem echoes ongoing discussions in other industries about the extent to which companies are responsible for impacts at both ends of their value chain.

But for all that Citizen Coke contributes to our collective understanding of business’s role in society, its undercurrent of disdain for and mistrust of companies like Coca-Cola—and the profit motive in general—undermines an otherwise compelling and reference-worthy text. For instance, the book is peppered with snarky and surprisingly naive comments like “As usual, it was all about money.” Further, Elmore often assumes sinister motives behind what strike me as sensible business decisions. In describing Coke’s reliance on suppliers such as Monsanto for the production of key ingredients, for example, Elmore does not concede that legions of business experts and economists say that companies should leverage their respective competitive advantages. Rather, he claims that Coke purposefully “dodged the risks and liabilities associated with direct production of its ingredients.”

Most disappointing (but not surprising) is how Elmore easily dismisses Coca-Cola’s attempts to address the problems he outlines. In the 1960s, Coca-Cola’s then president Paul Austin began making speeches announcing his intent to address the waste problem that the company’s packaging helped create. Elmore writes with apparent distaste that Austin “played the part of a corporate eco-warrior working from within big business to make a difference.”

As Groucho Marx reputedly said, I resemble that remark, having worked as such an eco-warrior inside BP (of all places) and written a book about others (including Coca-Cola’s director of global workplace rights) doing the same. I also fully acknowledge the challenges and contradictions inherent in taking stances as Austin did. But I’d urge Elmore and other skeptics to try to believe—at least for a moment—that corporate eco-warriors are sincere.

I’d urge skeptics to try to believe—at least for a moment—that corporate eco-warriors are sincere.

Citizen Coke details how Cola-Cola raised the wages of agricultural workers, made bold public statements about its sustainability agenda, conducted internal studies to assess its environmental impacts, and partnered with development organizations, for example, to invest in water provisions in developing countries. Yet Elmore discounts these efforts. And he never takes off his historian’s hat and spells out what he thinks Coke should have done instead.

Once I managed to set aside Elmore’s suspicions and biases, I got a lot out of his history of one of the world’s most iconic brands. But it’s likely that my main takeaway was the very opposite of what Elmore intended: namely, admiration—tempered by a recognition of the important challenges the author presents—for how Coke managed to maintain continuity and growth in the face of major changes in domestic and international government policies, commodity markets, public opinion, and its supply base. If we assume that water and other resources will continue to become scarcer, and that demands for corporate responsibility will continue to rise, Citizen Coke suggests that Coca-Cola Company is well positioned to adapt and thrive, as it has for more than 100 years.

Nothingness at the top of the heap
Abraham Cahan’s underrated classic, The Rise of David Levinsky, offers a portrait of success and solitude in the dog-eat-dog world of the garment trade.
by Daniel Akst
Digital issue