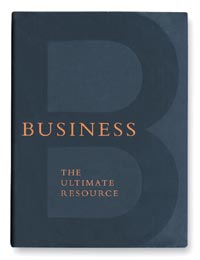 I took this whale of a book to the post office and put it on the scale. It weighed in at eight pounds, five ounces. Perseus Publishing has given birth to the Mother of All Business Books.

“Book” doesn’t really describe it. Business: The Ultimate Resource (2002) is a business library between covers, an ambitious undertaking, which, to a large extent, succeeds. It has 2,169 pages, 180 contributors, and more than 500 guides, lists, charts, essays, book summaries, biographies, and other business summaries grouped in nine categories: Best Practice, Management Checklists, “Actionlists,” Management Library, Business Thinkers, Management Giants, Dictionary, World Business Almanac, and Business Information Sources. One doesn’t read a volume of this scope — the obvious analogy is drinking from a fire hose — one refers to it.

Whether one reads or refers to Business: The Ultimate Resource, the book’s existence raises a fundamental question: Can executives learn better by reading or by observing or gaining experience? In his introduction, psychologist and author Daniel Goleman cites the compendium’s value as providing access to business expertise, literacy, and wisdom. Although the book is structured around organization and management processes rather than such subjects as marketing or finance, the comprehensive index and abundant cross-references provide access and make the book work.

The Best Practice section is a mixture of the practical (how to conduct performance appraisals), theoretical (the next scientific revolution), and trendy (investing in spiritual capital). It includes dozens of essays on 11 management themes from notable business thinkers, for example, “Creating Value Through People,” by David Maister, “Turnaround Strategies,” by Sir John Harvey-Jones, and “Marketing to the ‘Real-time’ Consumer,” by Geoff Mott and Regis McKenna.

The section also includes fresh insights. In “The Dance of Authenticity,” Watts Wacker and Ryan Matthews posit that authenticity — consistency between what a company says and “how it lives” — will be one of the primary factors to differentiate products and services. And consumers, not companies, will be the judge. Companies, they write, “spend billions of dollars prattling on about how their product is genuine, their service personalized, intimate, and engaged … and about how their companies … are devoted to the betterment of consumer lives. No wonder we don’t trust them. Businesses can’t declare themselves to be authentic, that’s the customer’s job.” Christopher Locke’s “The Case for Business Criticism” argues that although there is substantial criticism focused on art, music, literature, and media, there is a “glaring gap” in our understanding of business in society. Locke believes there should be more commentary in which business is placed in a broader historical and social context.

Self-promotion sneaks into a few essays — creativity guru Edward de Bono claims his “lateral thinking” technique generated 21,000 ideas in one afternoon from 130 workshops; that’s 161 ideas per workshop, or nearly an idea a minute for three hours. But a healthy dose of skepticism also exists, in Lucy Kellaway’s essay on fads, “The Good, the Fad, and the Ugly,” for example.

The most useful sections are the Management Checklists and Actionlists. The range of subjects can be surprising — the “Developing a Strategy for a World-Class Business” checklist is not far from a checklist on “Setting up a Suggestion Scheme.” But both Management Checklists and Actionlists are organized for clarity and accessibility, with FAQs, “making it happen” advice, common mistakes, and a glossary. One can readily imagine a young executive getting an assignment to start a program for kaizen or Six Sigma, and going to one of these lists to get started.

The Management Library, summaries of 72 of the “most influential books of all time,” is a digest of classics like Thomas J. Watson, Jr.’s A Business and Its Beliefs, Ted Levitt’s Innovation in Marketing, Peter Drucker’s The Practice of Management, and Harold Geneen’s Managing. I might have included Alvin Toffler’s Future Shock instead of The Third Wave, or Anthony Jay’s Management and Machiavelli instead of Machiavelli’s The Prince, but that is carping. And it’s nice to have The Peter Principle and Parkinson’s Law near at hand.

The Business Thinkers and Management Giants sections field a business all-star team with a 102-person-strong lineup that goes from Adam Smith to Peter Drucker, Estée Lauder to Oprah Winfrey, Henry Ford to Warren Buffett, and Akio Morita and Jack Welch to Jeff Bezos. The essay on my former boss, David Ogilvy, is an engaging portrait of the most famous advertising man in the world (as he described himself), if less insightful on what he brought to the business.

The second half of the book is made up of the business Dictionary, the World Business Almanac (statistics and charts on almost every subject and geography), and a 235-page section (a book in itself?) of Business Information Sources in case of information malnutrition. Plus an index.

So many subjects are covered throughout the book, some with several entries (there are 21 essays on people and culture in the Best Practice section, for example), that it is surprising there is so little on what drives organizational success — innovation. There are dozens of operating principles, but only a handful on how to generate and protect ideas that set one company or brand apart from others.

The book is also thin on corporate governance. Although this project was obviously undertaken before Enron’s debacle and other corporate scandals, governance has been a growing concern over the past several decades. There are a number of entries for ethics, but they tend to be academic rather than directive. The chairman of a board audit committee once instructed me, “The tone is set at the top.” Or, as Harry Truman put it, “When I was growing up in Independence, there was right and wrong, and you didn’t spend much time talking about it.”

What is one to make of all the information in this hefty volume? Will it just prop up other books on a shelf? It is not the Oxford English Dictionary, that great (but simple) reference work. And it is hardly a coffee-table book, although it can be browsed and dipped into.

But Business: The Ultimate Resource lives up to its subtitle. It covers a lot of ground and will be useful to several audiences, in several ways. Executives will go to it for a reminder of what they should be considering while working on a project, or for an introduction to an unfamiliar subject. Junior executives (if they’re smart) will study it as a training tool. Business teachers will refer to it in course preparation.