Crashed: How a Decade of Financial Crises Changed the World 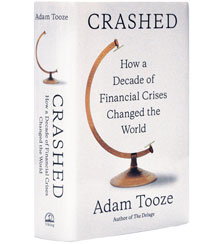 The United States is not having a very good century. So far, the 21st has witnessed terror attacks, an ill-conceived war in the Middle East, the worst financial collapse since the Great Depression, and a populist presidency that has left Americans deeply polarized.

Given this litany, it may not be surprising that, according to a recent Gallup survey, the world’s view of U.S. global leadership is at a record low. But in Crashed: How a Decade of Financial Crises Changed the World, Adam Tooze shows that the United States actually cemented its role as the indispensable nation through its handling of the 2008 financial crisis. In fact, it emerged as the only state “capable of meeting the challenge it posed.”

That is one of the several unconventional verdicts Tooze, a prolific historian at Columbia University, delivers in this intelligent and persuasive account of the global economy since the U.S. mortgage market exploded into a border-jumping financial conflagration.

Tooze contrasts the image of the crisis as an emblem of American decline with the reality that the U.S.’s role in leading the world out of crisis was clearer than its responsibility for causing the global recession in the first place. “The idea that was so prevalent in 2008, the idea that this was basically an American crisis, or even an Anglo-Saxon crisis, and as such a key moment in the demise of American unipolar power, is in fact deeply misleading,” he writes.

The standard account of U.S. crisis-fighting efforts places at center stage the Obama administration’s US$800 billion stimulus and the Federal Reserve’s monetary easing. But Tooze makes a convincing case that it was the Fed’s (often overlooked) 2008 establishment of an unprecedented currency swap arrangement with other central banks that actually prevented the crisis from metastasizing in a more devastating way.

“The US Federal Reserve engaged in a truly spectacular innovation,” Tooze writes. “It established itself as liquidity providers of last resort to the global banking system. It provided dollars to all comers in New York, whether banks were American or not.”

European banks that had gambled on investments in U.S. mortgage-backed securities found themselves desperately short of dollars when the crisis struck. In October 2008, the Fed organized a crisis-fighting team of central banks that ultimately funneled a staggering $10 trillion into the European banking system. Tooze calls this move “the decisive innovation of the crisis” and notes that it occurred with precious little public disclosure and even less public understanding. More than half of the financial firepower that the Fed unleashed to quell the crisis found its way to European banks, he says.

What’s striking is that the crisis that blew up in 2008 was not the one that so many smart people had anticipated. In the years leading to the crash, American experts from across the political spectrum warned that excessive U.S. government borrowing would inevitably end with bond market vigilantes fleeing Treasury securities and sending the dollar plunging.

Tooze presents two alternative ways of viewing the global economy through trade patterns and financial flows. The focus on the former led many to expect that unbalanced trade between the U.S. and China would precipitate a public finance crisis, and thus to overlook the larger and more dangerous private financial links between U.S. and European banks, which ultimately short-circuited.

Focusing on trade flows between nations, he writes, proved misleading. “An economy with a strong trade surplus, ample foreign currency reserves and an appreciating currency might well have banks, corporations and private citizens accumulating debts in foreign currencies.”

In the event, Tooze demonstrates that the U.S. policy response to 2008 proved far more successful than the piecemeal European effort to counter the subsequent 2010 crisis. The eurozone crisis, which featured the near splintering of the single currency, was not a discrete episode, in Tooze’s retelling, but emerged directly from the U.S. meltdown and was ameliorated only by U.S. action and the eventual adoption by European officials of American-style policies. Those included European Central Bank chief Mario Draghi’s July 2012 pledge to do “whatever it takes.” Writes Tooze: “The eurozone was saved by its belated Americanization.”

The eurozone crisis emerged directly from the U.S. meltdown and was ameliorated only by U.S. action and the eventual adoption by European officials of American-style policies.

Tooze, the author of prior works on the economy of Nazi Germany and the post–World War I period, is unsparing in his verdict on Europe’s approach. He calls it “a train wreck, a shambles of conflicting visions, a dispiriting drama of missed opportunities, of failures of leadership and failures of collective action.” Millions of Europeans in the smaller economies of Greece, Ireland, and Portugal were driven into a 1930s-style depression “for no good reason.”

On both sides of the dollar-based North Atlantic financial system, he finds political parties to have failed at a historic moment. Both left and right disappoint Tooze, who expresses understanding, if not sympathy, for the “populist” reaction to the great unraveling.

But American exceptionalists shouldn’t be too smug, Tooze warns. In the U.S., he draws a straight line between Republican grandstanding over the 2008 bank bailout, the rise of the Tea Party, and the general dysfunction that plagues Washington and inhibits legislative compromise. Today’s GOP “is incapable of legislating or cooperating effectively in government,” he writes.

And in the end, his analysis leaves us with an unsettling question. Global finance continues to rely upon the dollar as much as ever. If a new crisis were to explode, could the world likewise rely on American leadership?