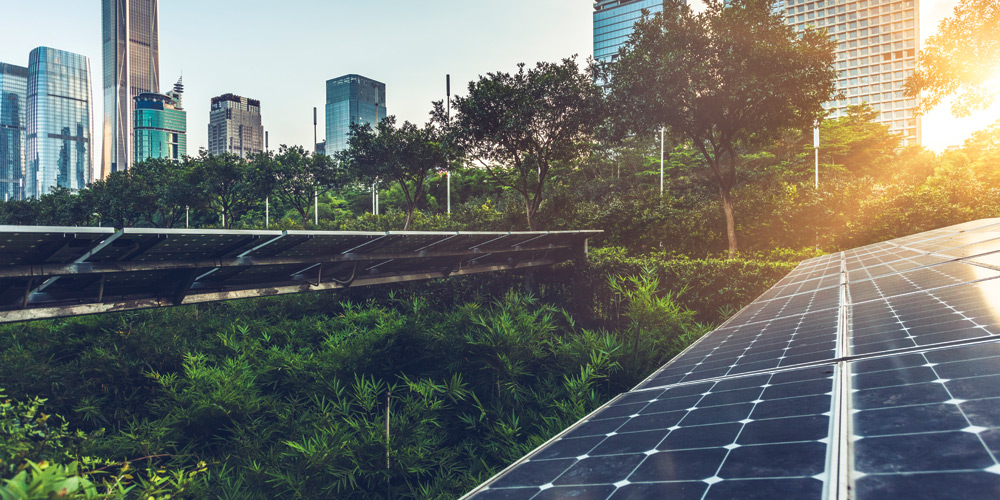 Environmental devastation, routine brownouts, and pollution from coal power plants so thick it coats buildings, cars, and lungs. These are the images many people associate with Asia’s energy infrastructure.

A visit to Ho Chi Minh City, Vietnam’s commercial capital, will confirm this choking dependency on fossil fuels to power some of the fastest-growing economies in the world. Coal-fired power plants and carbon monoxide emissions from industry and motor vehicles have combined to steadily worsen air pollution, according to environmental studies.

Yet this grim picture does not tell the whole story, and it certainly doesn’t necessarily indicate what the future of energy consumption will be in this burgeoning region of the world.

In fact, there are grounds for guarded optimism that recent momentum in Asia for the use of renewable sources of energy is creating a solid foundation for a new model of clean energy and green technology, one that could allow some countries to leapfrog others with more developed power policies and infrastructures.

“While the facts vary from country to country and no one is expecting renewables to replace fossil fuels anytime soon, we are seeing quite a bit of new momentum in many Asian markets that until now had been laggards,” says Paul Rapisarda, a U.S.-based financial consultant and energy industry veteran.

While no one is expecting renewables to replace fossil fuels anytime soon, we are seeing quite a bit of new momentum in many Asian markets that until now had been laggards.”

Rapisarda has been working with Thailand’s Meta Corporation, a developer of renewable energy power plants in Asia, to raise capital for the group’s 220-megawatt solar project in Myanmar. The project represents the first large-scale renewable energy power plant in that country and the largest of its kind in the region, home to the Association of Southeast Asian Nations (ASEAN), a bloc made up of Brunei, Cambodia, Indonesia, Laos, Malaysia, Myanmar, the Philippines, Singapore, Thailand, and Vietnam.

Meta, an independent energy company listed on the Stock Exchange of Thailand, is part of a growing green power movement that is attracting cross-border investment. These businesses are helping the region scale clean energy, especially wind and solar, at a pace that’s likely to accelerate over the next two to three years.

Other examples of regional renewable energy investments include Philippines-based Ayala Corporation’s AC Energy, which plans to spend more than US$1 billion on solar and wind projects by 2025. AC recently issued the first climate bond–certified and publicly listed U.S. dollar green bond in Southeast Asia, with combined investment from the Asian Development Bank and the International Finance Corporation, the World Bank’s private finance arm. Singapore-based Sindicatum Sustainable Resources, in another example, plans to invest another $200 million in equity capital in ASEAN markets over the next two years, for a total of $1 billion (including debt).

Siemens and GE are also jumping into the region’s renewables sector. In 2018, Siemens, a German energy and engineering group, won a contract to supply systems to the Trung Nam Group, a Vietnamese energy, construction, and real estate company, and help put Vietnam’s largest solar farm into operation with an array of inverters, power and distribution transformers, switchgears, circuit breakers, and control systems. Meanwhile, GE is adapting its equipment to local conditions with the development of a machine turbine for low wind speeds for use in India. The company has been supplying turbines from its technology center in Bangalore to 37 wind farms across the country.

These substantial investments address an urgent need. The collapse in 2018 of Saddle Dam D in Laos, which submerged several villages, displaced thousands, and killed at least 40 people, highlighted the vulnerability of some emerging Asian economies to reliance on traditional, large-scale energy generation schemes, whether they involve fossil fuels or are based on renewable, energy-generating hydropower.

Energy consumption in Southeast Asia has doubled in just over two decades, according to the International Renewable Energy Agency (IRENA), and with annual economic growth exceeding 4 percent, demand is set to double again by 2040. As detailed in a 2018 IRENA report on the region’s renewable energy landscape, meeting the growing demand through fossil fuels alone will come “at the expense of energy security, [the] environment, and sustainable development.” The region has set an “aspirational target” of having 23 percent renewables in the primary energy mix by 2025.

This pressure is why India, a world leader in wind farms, is expected to attract $80 billion in renewable energy investment over the next four years, why Myanmar and the Philippines are investing heavily in solar power, and why China has the world’s largest installed capacity of hydro, solar, and wind power. In fact, China is so far along in the development of solar energy that it has started to reach grid price parity. The country has already begun to manufacture solar panels without subsidies, and Beijing has mandated that all national solar and wind energy projects be subsidy-free after 2020.

The Chinese government is alert to the fact that its rapid industrialization has caused widespread pollution, resulting in illnesses, which in turn has led at times to public disquiet. “Industrialization caused too much air and water pollution, which led to health problems, which caused 80,000 demonstrations in one year,” says Assaad Razzouk, chief executive of Sindicatum.

This chain of events has helped drive policies clamping down on emissions. Hence the dramatic turnaround. Beijing used to be notorious for its toxic smog. Although it’s still not perfect, the city has improved considerably since its record air pollution levels in 2013. In 2019, the government has vowed to target emissions from vehicles, construction sites, and manufacturing plants. On a recent trip to Beijing, Razzouk was surprised by how quiet the city was for a Saturday afternoon. “I looked around and realized it was because all the scooters are now electric,” he says.

Meanwhile, India, which also suffers from hazardous pollution levels, can’t get sustainable development really going until it powers the 300 million to 400 million people who have no access to the electricity grid. Its government now recognizes the value of renewables in helping on both the social and economic fronts. In fact, the head of India’s Ministry of New and Renewable Energy announced in January that the government will auction off 40 gigawatts of wind and solar energy capacity every year until 2028 as part of its plan to produce 40 percent of its power from renewables by 2030.

Other countries are still lagging, for a variety of reasons. Experts have noted that corruption has been an issue in markets in which significant commercial interests in coal, oil, and gas have access to government infrastructure projects. Several ASEAN countries have been slow to catch on to the global green movement despite being among the areas most vulnerable to climate change. Although they have affirmed their commitment under the 2015 Paris Agreement, “these governments are leading from behind,” Razzouk says.

In the past, ASEAN nations such as Indonesia, Vietnam, and Thailand have been slower to embrace renewables owing to geographic and climate challenges. A solar farm in a given ASEAN country typically produces less than 20 percent of capacity during the day, versus about 30 percent in Australia or India. Wind and solar farms also must compete with agriculture for valuable land in these developing countries.

Lack of access to the grid system, where it exists, is also partly to blame for the slower pace of renewable energy development. Indonesia, for example, has only 18 megawatts of utility solar installed for a population of 250 million — just enough to power a couple of buildings.

And there is still the weight of dependency on fossil fuels in many ASEAN countries. Vietnam continues to rely heavily on coal, for example, and Thailand has been doubling down on natural gas. Malaysia currently produces only 2 percent of its electricity from renewable resources.

That said, change could come quickly in Vietnam, where more clean energy resources are needed to keep pace with growth in a country poised to benefit greatly from the current trade wars. “A lot of companies are shifting [operations] to Vietnam, but they need power,” explains Eric Francia, chief executive of AC Energy. “That’s why the Vietnamese government is being decisive about its renewables sector.”

Improved tariffs for wind projects, and a so-called feed-in tariff program for solar — which rewards renewable energy producers by paying them for each unit of electricity that’s fed into the supply grid — have been increasing investor interest in Vietnam’s renewables sectors in recent months. AC Energy, for example, is building more than 400 megawatts of solar in the country and plans to expand the wind project pipeline to between 500 and 1,000 megawatts over the next two years.

There’s hope for similar momentum elsewhere in ASEAN. Indonesia’s renewable energy target of 31 percent by 2050 could be achieved by 2030, according to a report by IRENA, “given the right investments and policies starting today.” In March, the country’s minister of energy and mineral resources announced an increase of 1.8 gigawatts of installed renewable power capacity in the government’s 10-year plan, to 16.7 gigawatts. That compares with 14.9 gigawatts in the previous state plan, although experts say the increase is still far short of what’s needed.

Thailand, for its part, has set a more aggressive target, with 30 percent of the country’s total energy consumption to come from renewables by 2036 — almost double the level of 2015. Thailand could reach more than 37 percent renewables over the same period, according to IRENA’s analysis, helped by the country's continued liberalization of its energy industry.

Cheaper and more adaptable equipment will help accelerate the pace in the region overall. The problem of intermittent resources can also be solved by combining solar and wind, integrating these sources with on-demand renewables such as waste-to-energy, hydropower, and geothermal, experts say. The development of utility batteries for the storage of solar and wind power is also around the corner, and should create a dramatic uptick in demand for renewables. “Everyone is pre-positioning for the arrival of this technology,” Francia says. “This will make renewables more and more competitive. It’s a potential game changer.”

For many markets, the key will be developing the political will to encourage a move away from traditional energy sources. “While the seeds of the region’s energy transformation have been sown, they require sustained policy support,” wrote Adnan Amin, IRENA director general, in the foreword to the group’s 2018 report.

But pressure must also come from the bottom up. “The people are well aware of the damage inflicted by coal and gas. Local communities are rising up whenever a coal-fired power plant is proposed near them,” Razzouk says.

Ultimately, it is not a matter of choice. Environmental pollution is occurring at such levels that it’s affecting the health of populations — like that of Ho Chi Minh City — and infrastructure is so weak that it’s impeding economic growth.

Change may happen quickly, and in three to five years, ASEAN may yet leapfrog the rest of the world. “Resistance to renewable energy in the ASEAN region can’t last,” Razzouk says. “The clean energy revolution is poised to steamroll fossil fuels worldwide as the cost of renewable plunges. I just hope it’s not too late from a climate perspective.”

Topics: asia, energy, green technology, infrastructure
Get s+b's award-winning newsletter delivered to your inbox. Sign up No, thanks