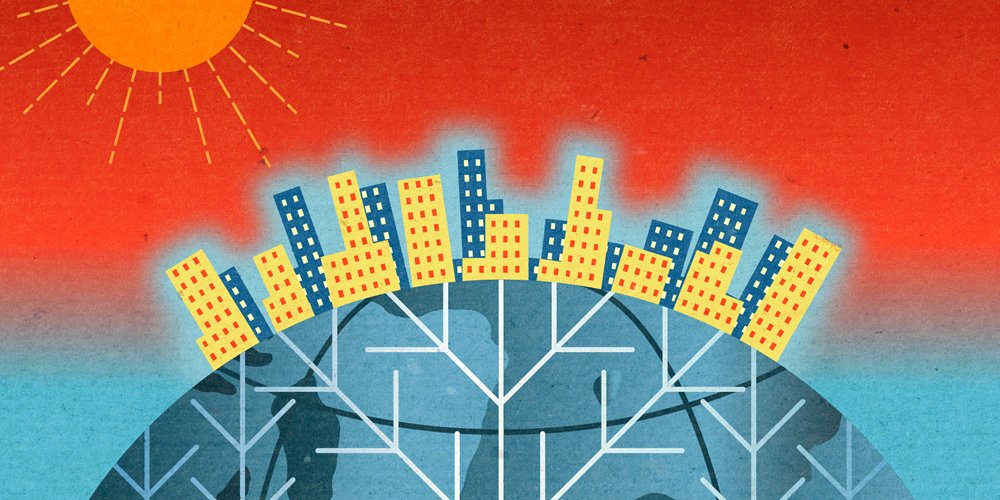 Air conditioning, a necessity of modern life, is unique because it perpetuates the very problem it solves. As the planet warms and as it prospers, more people demand air conditioning. Traditional systems consume a lot of energy, which requires burning fossil fuels. That leads to greater carbon dioxide emissions, further warming the planet and intensifying the demand for air conditioning.

Traditional air conditioning systems are inefficient by design. They are designed to meet peak loads, such as a fully occupied building on the afternoon of the hottest day of the year — even though that load rarely occurs. Most residential buildings are empty during working hours, and most office buildings are vacant at night. Fortunately, a more effective alternative for areas of high-density demand exists: district cooling. District cooling, which is the flip side of the district heating systems in use in the Nordic countries, is not a technology but rather an approach. It treats the provision of cooling as a utility and uses a single networked system to cool multiple buildings, such as an apartment tower, an office building, and a shopping center.

District cooling has many virtues. It is far more energy efficient than traditional systems and more cost-effective for customers. District cooling reduces peak power capacity requirements, because it does not need to meet large spikes in demand. Nor does it require radical advances in the underlying technology, because it is already in use today, primarily in the countries of the Gulf Cooperation Council (GCC), which comprises Bahrain, Kuwait, Oman, Qatar, Saudi Arabia, and the United Arab Emirates (UAE). In fact, in countries such as Qatar and the UAE, district cooling already accounts for between 15 and 25 percent of cooling capacity. Most importantly, the district cooling approach holds the potential for significant savings. Our analysis shows that using district cooling where appropriate to meet future additional cooling demand could reduce the total energy required for cooling by 16 percent, leading to more than US$1 trillion in energy savings worldwide through 2035.

A recent report by the International Energy Agency (IEA) projected that global demand for air conditioning will triple over the next 30 years because of growing populations and rising prosperity. The world’s population will increase by about 1 billion, reaching a total of 8.7 billion by 2035. Most of that growth will occur in places with hot and humid climates. A burgeoning middle class and rising living standards in large developing markets such as China, India, and Indonesia mean that more people will want air conditioning, and they will have the means to pay for it. Urbanization increases demand. Appliances and machinery generate heat and increase the local temperature, creating urban “heat islands” that are much warmer than the surrounding rural areas. These factors are compounded by global warming.

Using district cooling where appropriate to meet future additional cooling demand could reduce the total energy required for cooling by 16 percent, leading to more than US$1 trillion in energy savings worldwide through 2035.

In all, these trends will push the total number of cooling units to rise by approximately 57 percent, from 4.4 billion in 2019 to 6.9 billion in 2035. More than half of this increase will come from lower-efficiency residential split air conditioners, which involve an external component that chills water and an internal component that blows cool air. However, the power capacity required for cooling will increase faster than the number of units, rising by 78 percent by 2035. This means that if current systems remain the dominant means of providing cooling, the global energy used for cooling will nearly double.

Given these challenges, the IEA has called for increasing the efficiency of traditional air conditioning systems through interim measures such as minimum energy performance standards, better building designs, and stricter building codes. Although improved energy efficiency is necessary, it likely will not be sufficient on its own. This approach is akin to focusing on the fuel efficiency of gas-powered cars, rather than considering newer options such as electric cars.

District cooling offers a smarter and more effective approach. In district cooling, a single centralized plant pushes chilled water through a distribution network to multiple buildings, which can tap into it according to their needs (see “Cool design: How district cooling works”). Each building has its own heat/cooling exchanger and uses the chilled water to provide cooling, as needed, to different types of occupants with different demand schedules: offices during the day, restaurants in the evening, apartments in the early morning. This design leads to reductions in power consumption of 60 to 80 percent compared with the average conventional cooling system. District cooling also offers other benefits, including reduced carbon dioxide emissions, more reliable cooling for occupants, and increased real estate values (because buildings can use their rooftops for purposes other than housing air-conditioning equipment). 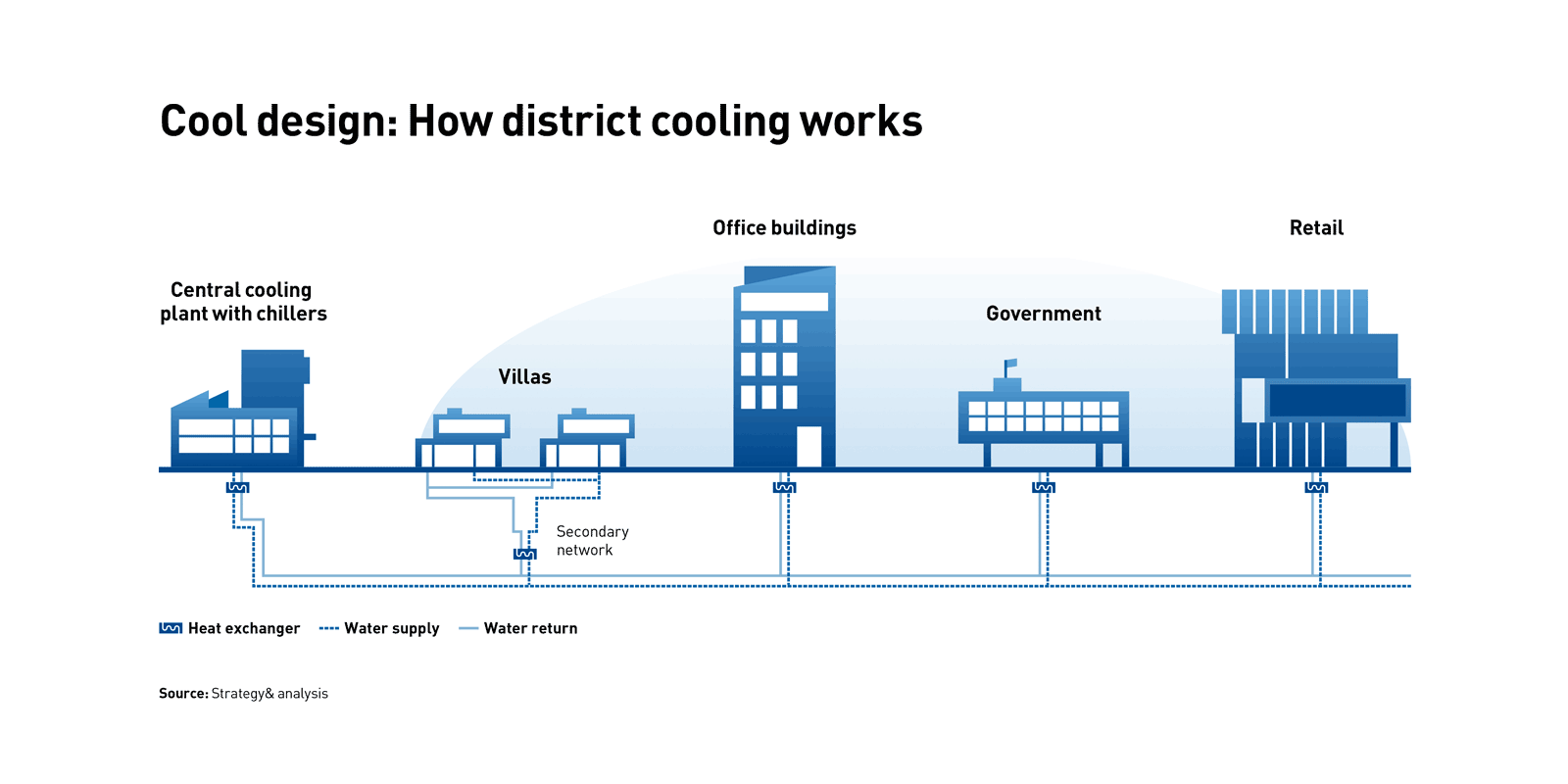 The greatest challenge of district cooling is that it calls for significant coordination and planning among multiple stakeholders. District cooling requires large, up-front investments; centralized management; and considerable regulation — typically the same regulation needed for other sustainability and efficiency measures such as solar power or geothermal cooling. It will not succeed in an unregulated market.

For these reasons, district cooling is still relatively rare; in 2016, it provided just 2 percent of global cooling requirements, according to the IEA. The six countries of the GCC are a significant exception. Penetration rates of both district cooling and stand-alone air or water chillers, the base technology used in these systems, are far higher than in the rest of the world, representing up to 25 percent of the region’s cooling capacity. This high adoption rate is due in part to a long-running building boom. In particular, the region’s megacities — which are planned, designed, and built on an accelerated time line — are prime candidates for district cooling. These projects include Masdar in the UAE, Lusail City in Qatar, and the upcoming Neom in Saudi Arabia. The GCC region’s hot climate (up to 120 degrees Fahrenheit) and the need to minimize the cooling load during summer days, when cooling represents up to 70 percent of peak electricity demand, contributed to district cooling’s rapid acceptance in the region.

GCC countries have accumulated critical expertise and developed a set of regulations for creating a stable, healthy market for district cooling. These frameworks, which address commercial, legal, and technical elements, are similar to those that exist for electricity and water utilities. The GCC countries can offer lessons for governments and stakeholders that want to apply district cooling in other markets.

The six components of regulation for district cooling that follow have to be implemented at the same time.

• Mandate the use of district cooling. Real estate developers often do not see the demand for more efficient solutions — they go with what they know. For this reason, governments have an interest in requiring the use of district cooling in situations where it is likely to be a better option. Regulators should work closely with urban planners, analyze master plans, and identify the most promising areas.

• License key participants. Regulators should license district cooling operators, providers, and retailers to ensure they have sufficient capabilities and know-how to compete in the market. Licensing allows regulators to control the number and quality of service providers, which can make the market viable. Regulators should be able to grant or revoke licenses, investigate abuses, and take any other steps necessary to ensure that customers enjoy high-quality service and effective competition and pricing.

• Set standard rules for contracts. Governments should develop a framework for district cooling contracts. The right approach will protect customers’ rights, reduce legal costs by eliminating the need for each company to create its own contracts from scratch, and proactively reduce the number of stakeholder complaints and disputes.

• Establish competitive bidding processes. Many markets will have a small number of participants that can offer district cooling — especially early on. Without government intervention, that can lead to monopolies or oligopolies and an unfair market. To avoid this situation, governments need to define minimum requirements during the bidding for district cooling systems and ensure there is a healthy amount of competition in the market. Competitive bidding may lead to longer processes, but the costs are outweighed by the benefits, which include increased transparency, lower barriers to entry for new companies in the sector, more competitive prices, and higher-quality service to customers.

• Regulate prices. Finally, price regulations are necessary to safeguard the rights of customers and ensure a stable market in which developers and providers can charge a fair rate of return for their services.

As developing countries face growing demand for cooling, leaders have to look beyond merely improving the energy efficiency of existing technologies. The GCC’s early start in the adoption of district cooling makes it a model for what is possible. By learning from what has worked well in the GCC, developing countries will be better equipped to meet increased cooling demand while also improving their energy efficiency.