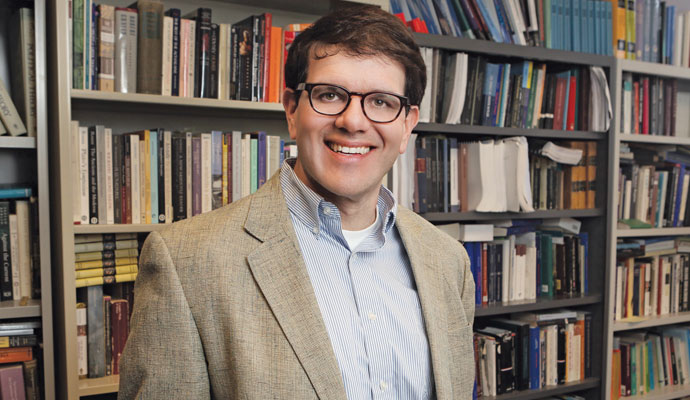 Among the most difficult challenges that leaders confront are those involving their own moral and ethical limits. They face fierce short-term demands, tough competition, regulations, and political pressures. But they also have a personal and professional mandate to be virtuous: to avoid corruption and abuse of their subordinates, and to be honest with and trustworthy to their customers and investors. We have seen all too many examples lately of leaders (and companies) failing to live up to this level of virtue. What, then, does it take to succeed?

For Ryan Patrick Hanley, the Mellon Distinguished Professor of Political Science at Marquette University in Milwaukee, the answer to this daunting question can be found in the writings of Adam Smith. Hanley is a scholar of Smith, who is widely recognized as the first modern economist. In his seminal work, The Wealth of Nations (1776), Smith articulated what we now call free market theory: the ways in which an unfettered market, like an “invisible hand,” as he famously put it, organizes the activities of self-interested individuals to foster the common good. Hanley’s scholarship focuses on Smith’s other major work, The Theory of Moral Sentiments, which looks at questions of morality and virtue. In this book, published first in 1759 but in its final, sixth edition in 1790, Smith considers how citizens, including businesspeople, can resist the temptations of corruption and exploitation that often seem to be triggered by the invisible hand.

The two most obvious ways to restrain human behavior — legal regulations and community censure — were not adequate. Legal regulations tend to be uncomfortably blunt instruments of morality. There is always a way to get around them, and those who comply often bear unreasonable costs. As for community censure, even the most enlightened community has blind spots, and some fall prey to highly unsavory values. Yet what else, besides the law or public shame, could hold the robber barons of yesterday — or today’s serial sexual abusers, data manipulators, and money launderers — in check?

Smith proposed a solution principally based on what he called the “impartial spectator.” This was, he said, a voice within the mind oriented not just to one’s own desires, needs, and success, but to the overall long-term value of the entire system. The impartial spectator is a kind of storyteller from within, asking the right questions to help one see oneself and one’s actions as others might.

This concept of perspective and prudent leadership amid the turbulence of commerce is a core theme in Hanley’s body of work, which includes a trilogy of writing on the moral dilemmas inherent in capitalism: Adam Smith and the Character of Virtue; Adam Smith: His Life, Thought, and Legacy; and Love’s Enlightenment: Rethinking Charity in Modernity. Neuroscientist and s+b contributor Jeffrey Schwartz suggested we talk to Hanley as part of our ongoing exploration of the challenges of strategic leadership.

S+B: Every senior decision maker today is subject to immense ethical and reputational pressure. How would Adam Smith’s concept of virtue help deal with that?
HANLEY: Smith continually puts forth the notion that complex systems far exceed the capacity of any one individual mind to effectively manage. He writes, with disfavor, about a manager who moves human beings around as if they’re pieces on a chessboard. The most damning aspect of this type of leader is that he thinks he understands the interests of other individuals better than the individuals themselves could understand.

Smith refers to this attitude a number of times, as hubris, pride, and the love of domineering. The point-blank lesson is that we should fear such “men of system,” as he calls them, who insist they have all the answers and are ready to run roughshod over the self-interests of the other individuals in a company — or in society.

S+B: But a successful entrepreneurial leader has to continually push people’s limits, including his or her own — and to go where no company has gone before.
HANLEY: Yes, and Smith is a real advocate of this. He values progress, and he says people make progress individually, as they specialize. In fact, James Watt, who developed the steam engine, had a lab at Glasgow while Smith was an administrator there. Smith wrote about the dangers of impeding innovation. For instance, he criticized his friend David Hume’s defense of state-supported religion. He preferred a multiplicity of religious sects, so none could be too powerful. He wanted to secure the conditions by which maximum innovation could occur. And he was deeply sensitive to the idea that it comes from unexpected quarters — not just from established inventors like Watt, who was supported by university funds. In The Wealth of Nations, Smith writes about a working teenage boy, who was charged with managing the boiler of a fire engine. This teenager invented an automatic valve, which ultimately became an important refinement to the machine, so he could have more time to play with his friends.

S+B: How did Smith develop this perspective?
HANLEY: He was a consummate empiricist, long before observation was fashionable in social science. We know that he spent time in Glasgow when its commerce was booming, when its ships were sailing to and from ports all over the world. His famous example of the pin factory, which he used as a metaphor for the division of labor, was based on a factory he had seen. He saw the commercial life up front.

Without respect for values, the mutual trust that a commercial society needs can’t get off the ground.

He was a keen student of history as well — deeply interested not just in the facts and figures of economic history, but also in the leadership styles of particular individuals. This is one of the things that makes him appealing to contemporary readers. He doesn’t describe prudence in the abstract. He describes prudent people he observed. And he tries to show how their actions follow from some of their philosophical and theoretical commitments.

S+B: For example?
HANLEY: Smith wrote at the onset of what we now know as globalization. The British East India Company’s activities worried him. Beyond the wealth the company was bringing back to Manchester, Edinburgh, and London, what terrible effects was it having on the people living in India? He looked at the human cost of corporate activity, including the loss of job mobility and the ways in which local economies can be hurt, and he suggested ways to translate a moral sensibility into business decisions.

S+B: How would an understanding of moral sentiments help a leader today?
HANLEY: There’s a great debate among Smith scholars as to whether he’s simply describing what is or proposing what ought to be. In my view, his theory of virtue is where he’s normative: describing the kind of virtues that a flourishing commercial society needs. He is, in part, a theorist of the utility of what have sometimes been called “bourgeois virtues.” It’s no accident that he and Benjamin Franklin were personal friends. Smith favors prudence, for instance, but he doesn’t see the best society as one in which prudence is universally possessed. Other virtues help society flourish — benevolence, magnanimity, and self-command among them, even if their economic utility isn’t as obvious. Nor does he think we need 100 percent compliance.

Rather, he argues that without respect for these values, the sorts of trading relationships that we value, and the mutual trust that a commercial society needs, can’t get off the ground.

That’s the context of Smith’s impartial spectator — a construct in your mind that represents an ideal of perfection, which you aspire to match. But when you think about your own virtue, vis-à-vis that absolute standard of behavior, you find yourself humbled. You thus become more “indulgent of the imperfections of others,” as Smith says.

S+B: In other words, you continually strive for a transcendent perfection that no one could possibly reach.
HANLEY: Yes. Smith is very explicit about this. You know that absolute virtue is impossible to achieve. But you aspire to it anyway. And there is a delicate balance involved, because your aspiration is tempered by a realistic awareness of the ways in which achieving your goals could affect other people. That way of thinking through things — how to mitigate the social costs and maximize the benefits of our actions as leaders — strikes me as a very sober, moderate, and, frankly, attractive way of trying to make sense of today’s political and economic options, and to figure out how to maintain long-term economic growth in society.

S+B: Does Smith explain how to develop this way of thinking?
HANLEY: To Smith, the virtuous person is an acute observer of ordinary life over a long time; it’s someone who develops the capacity to make connections, synthesize, and see patterns. I think that Smith himself was a good example of this. He was a careful student of how things actually worked, and he tried to understand what was more and less successful in the organizations he knew.

To Adam Smith, the virtuous person is an observer of ordinary life; someone who develops the capacity to make connections and see patterns.

Awareness also meant a deep sensitivity to what he called “corruption”: the dangers of imprudence and callousness. In The Wealth of Nations, he defends commerce by pointing out the tragedies of a poor society: People in that society are reduced to conditions in which they feel they have to kill the young, the old, and the disabled. Commercial society avoids that moral tragedy. When there is wealth, there is dignity and basic respect for life. But only if you have the responsibility to manage prosperity in what Smith would call a prudent way.

S+B: In your most recent book, Love’s Enlightenment, you write about four philosophers who were trying to figure out how far this empathy extends.
HANLEY: One of the things I find fascinating about the 18th century is its emphasis on the idea of a “common humanity.” David Hume, for example, wrote about the instinctive feeling that people have for all others, because we recognize their “resemblance,” as he put it, with ourselves. Today, it’s fair to ask if we’ve moved to a narrower sensibility, retreating into our subgroups, where it’s more difficult to see shared humanity. Even Hume and Kant were on what we would now call the wrong side of history when it came to some of the things they said about race and non-Europeans. Smith, on the other hand…wrote against slavery and colonialism, [and] it wasn’t just because he saw the negative economic effects of what he called the “sordid” treatment of native Africans and North Americans by his fellow Europeans. He had the capacity to recognize excellence and virtue wherever it exists, without letting differences like race or status distract him. Today, I find that capacity deeply attractive, and Smith’s writing is a good example of it.