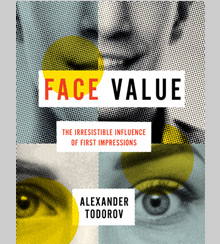 The list of human foibles is long. The 2015 s+b article “Beyond Bias” lists 24 of the most common biases, including blind spots, the illusion of control, and the concept of sunk costs. Since the early 2000s, Princeton University psychology professor Alexander Todorov has been studying one of those long-standing human foibles: the first impression.

In his new book, Face Value, Todorov pulls together all he’s learned about first impressions. At first glance — and upon a careful reading — it makes for a fascinating and thorough examination of the subject. Todorov’s expansive tour includes the history of physiognomy (the dubious science of predicting character from physical appearance) and a survey of modern first-impression research, much of which Todorov has conducted in his Social Perceptions Lab at Princeton. His conclusion: We find judging others based on a single glance irresistible, but the judgments we reach are usually wrong.

We find judging others based on a single glance irresistible, but the judgments we reach are usually wrong.

Todorov reports that people can form a first impression from a person’s face in as little as 30 to 40 milliseconds. That’s less time than it takes to say “milliseconds.” Moreover, we start forming first impressions as infants. In his lab, Todorov generated faces on computers, which assemble them from features that have been shown to reliably produce specific impressions in viewers. And he and his colleagues found that 11-month-old babies are more likely to crawl to “trustworthy” faces than to “untrustworthy” faces.

Humans’ shared predilection for associating certain facial features with specific character traits gave rise to physiognomy, a pseudoscience that stretches back to Aristotle. The ancient Greek philosopher thought that the character of animals was revealed in their features and that people who resembled these animals had the same traits. Cowardly animals — deer, rabbits, and sheep — have soft hair, reported Aristotle, and Southern peoples have soft hair, too. Ergo, Southern peoples are cowardly.

But businesses wouldn’t rely on such superficial means of judging people, would they? Well, in 2014, the Milwaukee Bucks hired a face reader to help it select better players. “I would not bet my money on their secret weapon,” writes Todorov. (The Bucks had a 42–40 record in the 2016–17 season and lost in the first round of the playoffs.) In 2014, Tel Aviv–based Faception was founded. It’s a “facial personality profiling company” that uses computer vision and machine learning to reveal your personality from a picture of your face for corporations and governments.

If theories of physiognomy don’t hold water, why are they still around? Because, Todorov explains, although their claims were wrong, they had latched onto a fundamental truth: “We immediately form impressions from appearance, we agree on these impressions, and we act on them.” That’s why CEOs who are deemed to look more competent get hired to lead more successful firms. And it’s why political candidates —  in countries around the world — who look more competent win elections.

The problem is that even though competence is a look that many of us may recognize and agree upon, it only goes skin-deep. It turns out that the appearance of competence predicts higher CEO pay, not superior corporate performance. And I’ll leave you to draw your own conclusions about the actual competence of those competent-looking political candidates.

Moreover, our understanding of what comprises the appearance of competence or trustworthiness or sociability has become so advanced that images can now be manipulated to create false impressions. Todorov has studied the effect that changing the shape of a mouth or the arch of an eyebrow or the height of a forehead has on first impressions. “We can do even better by building mathematical models of impressions,” he writes. “Using these models, we can increase or decrease at will the specific impression of a face, whether of trustworthiness or dominance or any other impression.”

Whether or not we are being purposefully misled by a face, first impressions are not sound impressions. “Across several domains — predicting sexual and political orientation, cheating, and aggressive behaviors — we find little evidence that our impressions are accurate,” reports Todorov.

Armed with this knowledge, what should you do? Be aware of your innate habit of forming snap judgments based on appearance, says Todorov, and look for other sources of knowledge about people. Take a cue from Billy Beane of Moneyball fame, for example, and focus on performance statistics. Or institute blind auditions — a technique that led to the sudden influx of talented female musicians into the male-dominated world of philharmonic orchestras.

“The real map of the face is dynamic and constantly shifting, its interpretation rapidly changing in different situations” concludes Todorov. “As long as we remember that, we are less likely to fall into the physiognomists’ trap of seeing the face as a source of information about character.”