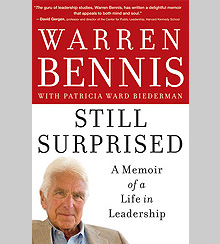 The best leadership insights don’t derive from abstract theories or number crunching. Instead, they are grounded in the practical experiences of real leaders.

Warren Bennis, whom the Wall Street Journal recently called “one of the business elite’s favorite gurus,” has closely observed leaders, mentored them, and been one himself, in the rather nasty world of academia where few are willing to be followers. He knows personally what it means for a leader to fail. Those in the rank and file can hide their errors, but the failures of leaders are public acts and thus visible for all to see. That’s why most would-be leaders are crushed by their early mistakes and, to spare future embarrassment, resolve never to lead again. But Bennis has showed us that real leaders learn from their failed efforts, shrug off the embarrassment, and seek out the opportunity to apply what they have learned.

He argues persuasively that leaders are formed by the roles they find themselves forced to play in all aspects of their lives. He calls such learning experiences the “crucibles” in which leaders are formed. In the passage you are about to read, Bennis describes how his role as a 19-year-old noncommissioned officer in Germany in World War II shaped him into a leader.

Excerpted from Chapter 1 of Still Surprised:
A Memoir of a Life in Leadership

Oddly enough, I was rarely afraid as a soldier. That was true even though I knew the average platoon leader had only six weeks to three months before he was seriously wounded or killed. I rarely thought I would die, even when we were under fire. I didn’t pray. In fact, I was far more anxious as a new university president than I ever was in combat.

My lack of fear may have been directly related to the role I assumed as a second lieutenant and later as a platoon leader. That role required me to appear calm and unafraid to my men. (At that point, cognitive dissonance may have kicked in, causing me to feel calm and unafraid because I was acting that way.) Far too often we look to psychobiography, not role, to explain human behavior. Look how often observers have linked George W. Bush’s drive to become president to his need to best his more illustrious father, George Herbert Walker Bush. Look how often analysts traced Bill Clinton’s hunger for public acclaim to his unhappy history as the stepson of a violent alcoholic and a mother whose job often took her away from him. I am not saying that our pasts don’t matter. But the older I get, the more apparent it becomes to me that the roles we play in the course of our lives have more to do with our successes or failures than our personal histories. During the war, being a soldier had considerable panache and came with an impressive costume — my handsome new uniform. And much as a good actor does, when I put on that uniform and the gold bars that went with it, I instantly became an officer in the U.S. Army. The role I stepped into prescribed certain attitudes and behaviors, and it also provided models for how I was to act. It empowered me to try on selves that nothing in my past had suggested to me. I was expected to lead my men and give and enforce orders and so I did, without any of the hesitation or insecurity that was natural to the boy I had been as a civilian. The uniform gave me permission — required me, really — to observe the officers around me and find potential strategies for being a successful officer in their example. Nothing in my previous life had indicated there was a leader in me waiting to emerge. But the uniform gave me entree into the leaders’ world (including, when we were not on the front lines, the officers club), it created expectations of leadership that I was eager to fulfill, and it gave me an ideal vantage point from which to observe good leadership and bad being played out in real time for the highest possible stakes, human lives.

If I had been more self-aware then, better equipped to analyze the remarkable circumstances in which I found myself, I might have asked myself if I was authentic in this new role. But I have no recollection of thinking deeply and analytically about anything that was happening to me. As everyone does in war, I lived entirely in the often miserable present. But in an almost magical way, the uniform seemed to bestow on me the ability to do what I had to do. It was talisman and inspiration, a symbol of my new authority and a mark of my new responsibility. More than 40 years later, Sydney Pollack, the director of such much lauded films as Tootsie and Out of Africa, told me how he turned himself into a director by playing the role of director. “The first time I directed anything,” he said, “I acted like a director. That’s the only thing I knew how to do, because I didn’t know anything about directing. I had images of directors from working with them [Pollack was also an actor], and I even tried to dress like a director — clothes that were kind of outdoorsy. I didn’t put on puttees, or anything like that. But if there had been a megaphone around, I would have grabbed it.” The role and a persuasive costume from L.L. Bean allowed Pollack to behave like a director until he truly became one.