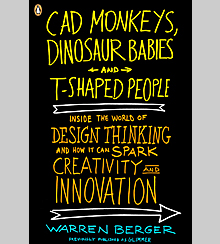 Bernie Goldhirsh, the founder of Inc. magazine, used to tell the staff to think of the magazine’s readers as “artists using both sides of their brains.” An entrepreneur, he said, was “someone with the soul of an artist whose means of expression happens to be business.”

It would be hard to come up with a better example of entrepreneurial artistry than the one Warren Berger presents in the following excerpt. It’s worth noting, in particular, the “stupid” questions that drove Ray Davis’s process of redesigning Umpqua Bank: Why do people come to a bank? and What does a bank do? In effect, Davis was asking, Why are we in business? and What is our purpose?

Those questions are, of course, the most important questions that any business leader can ask. You can’t build a great business without asking them, or without coming up with compelling answers. As the Umpqua Bank example demonstrates, the questions and answers can unlock the doors to innovation and creativity in business.

The sad part is that so few business leaders ask those questions, particularly if those leaders run large, public companies. I don’t know whether that has more to do with the personality and training of the leaders, the demands and expectations of investors, or the sclerosis of size. It’s probably some combination of the three. But I doubt it’s coincidence that Davis began his process when Umpqua Bank was still small and privately owned — which brings us to the importance of design, the subject of Berger’s book. By answering the questions and creating a design that reflected the answers, Davis was able to build a model that subsequently allowed Umpqua Bank to grow as a public company without losing its soul. Therein lies a lesson for all business leaders to take to heart.

Excerpted from Chapter 5 of CAD Monkeys, Dinosaur Babies,
and T-Shaped People: Inside the World of Design Thinking and
How It Can Spark Creativity and Innovation

In the Pacific Northwest of the United States, there is a regional chain of banks bearing the unusual name Umpqua. The bank offers CDs, but not necessarily the kind you’d expect: Right out in the middle of the bank floor, Umpqua sells music discs of local rock bands (the bank also helps sponsor those bands). Depending upon when you visit Umpqua, you may also find yourself wandering into the middle of a book reading or a knitting circle. Special guests of all kinds show up. Once, they brought in a pet psychic.

Most banks have rope lines leading to teller windows; the idea is to move you along, like an item on an assembly line, until your money has been extracted and you can be shown the door. But Umpqua is designed to seduce you into hanging around. The bank has a spacious lounge area with soft furniture where you can watch a flat-screen TV or use the free WiFi service while sampling Umpqua’s own blend of gourmet coffee. At some point, if the spirit moves you, you can do some actual banking at a concierge-style teller desk — and after each transaction, you’re rewarded with a chocolate coin served on a silver platter.

This small bank — which has done such a good job of reimagining the banking experience that researchers from larger banks now pay money to be allowed to come into Umpqua and study the way it works — is a product of design thinking. Its chief executive, Ray Davis, is not a designer but he intuitively employed design principles when he set out to re-create Umpqua back in the late 1990s and early 2000s. Davis, who ran a bank consulting firm before being recruited to fill the top spot at Umpqua, began by asking stupid questions such as Why do people come to a bank? and What does a bank do?

He teamed up with design researchers and used empathic study sessions to get a better understanding of what people really thought of banks. Some of the findings were not surprising: Yes, people hate the fluorescent lighting and the rope lines, to say nothing of those damn chained pens. But, even in the digital era, people seem to like the idea of their money being in a building they can drive past at any time. And they also like to be able to see the vault (they realize their money may not actually be in there, but it still comforts them to look at a big sturdy lockbox). Davis and the design researchers at the Ziba Design firm of Portland learned something else: A lot of people don’t trust big banks.

The research showed that people felt disenfranchised and disconnected from the large financial institutions and were more inclined to trust a small community bank. This was well before the subprime mortgage crisis and the big-bank bailouts, yet the people Ziba studied already had an uneasy feeling that perhaps the large banks might not be doing the right things with their money. “And as we now know,” says Ziba creative director Steve McCallion, “they were right to feel that way.”

To appeal to these “localists,” Ziba suggested that Davis play up the community hub aspects of the bank as it opened its new Portland flagship “store” (Davis doesn’t like to call them “branches”) in 2003. “We wanted to shift the notion away from banking being all about speed and efficiency and getting you in and out the door,” says McCallion. “We decided to focus on the idea of ‘slow banking,’ with people you know and trust.”

As he remade the bank, Davis and his designers began to jump fences, taking ideas from other seemingly unrelated fields such as the hotel industry and importing them to his bank. And as they did this, they were often guided by the use of metaphors. McCallion’s firm is a big believer in what he calls “transformational metaphors,” wherein a company thinks of itself as something other than what it is — which, in turn, changes the way it behaves. If a company thinks of itself only as a bank, it behaves one way. But if it begins to think of itself as a boutique hotel, or as a country store, or as a community center — and Ray Davis had all of these metaphors floating around in his head — then it starts to behave another way.

Thinking metaphorically is common in design. [Canadian designer and author of “An Incomplete Manifesto for Growth”] Bruce Mau hit upon the idea that businesses might benefit by thinking that way in the mid-1990s, when he began working with corporate clients that, Mau felt, were too restricted in how they viewed themselves. One of the laws Mau included in his manifesto was Work the metaphor. He declared that every product, every service, every brand “has the ability to stand for something else.” And if a company could begin to think this way, it could have a liberating effect by opening up new possibilities, offering fresh ways to present that company and its services to the public.

Davis did not know Mau from Mao, but he “worked the metaphor” like nobody’s business. He turned Umpqua into one part Ritz-Carlton, a little bit of Pier 1, a touch of Elks Club, and threw in a double-shot of Starbucks.

The bank also used metaphors to breathe life into mundane bank products. Bank accounts were named after life-stage aspirations, such as “Go,” “Reach,” “Savor,” and “Cruise.” And some of the services were packaged in offbeat ways: If you want to switch your account from another bank to Umpqua, you get your application from what looks like a soft drink can (the cans are in vending machines that instruct you to push a button “for a refreshing change of bank”).

One of the more clever metaphors dreamed up by Umpqua involved an outreach program to small businesses. To draw attention to the loan program, Umpqua set up a parallel program geared to local children, inviting them to apply for a lemonade stand start-up kit from the bank. “We felt that the lemonade stand was a perfect metaphor for small business, because in many ways it represents the original small business,” says Jim Haven of the Seattle design firm Creature, which helped create the lemonade program for Umpqua. Creature designed thirty top-notch lemonade stands (collapsible, on wheels, made of aluminum, and quite stylish looking). To apply, kids filled out an application form written in crayon, designed by Creature to run in local newspapers. Those applicants who won a stand also received ten dollars in capital and a starter kit with tips on launching a business. The lemonade stand program made a big splash in the community and was all over the local news. Simultaneously, it drew a lot of attention to Umpqua’s small business program — and lured in more than two thousand new business customers.

From a bottom-line standpoint, design helped Umpqua grow organically — and without having to take the financial risks that got so many other banks into trouble. When Davis took charge of the sleepy regional bank, it had $150 million in deposits, and he was able to take that up to more than $7 billion, with nearly 150 branches/stores. Like everyone in the banking industry, Umpqua has taken its lumps during the financial downturn, but its overall performance has remained steady, even as other small, independent banks have collapsed. The slow-local-trusted angle has become a strong selling point in turbulent times.

Davis thinks of what he’s done as an attempt to “redesign the delivery system of bank services.” Umpqua’s still doing what banks do, but it’s getting those services to the customer in a different way by creating a very different experience inside the bank. In the process of doing this, Umpqua is also designing a complex and evolving relationship with people who now come to the bank for the personal service, the activities, the sense of social connection. While other banks try to compete on, say, CD rates, Umpqua has given people a variety of reasons to keep coming, most of which have nothing to do with rates.

It’s worth noting that Davis happens to love what he does, in part because he doesn’t see himself as a banker but more as a showman, concierge, community organizer, proud shopkeeper, and orchestral maestro. He doesn’t really see himself as a designer, he says. But he should.

Maintaining network connections
As we redesign work for the hybrid future, it is vital to understand the ways that information flows and networks form within organizations.
by Lynda Gratton
Digital issue