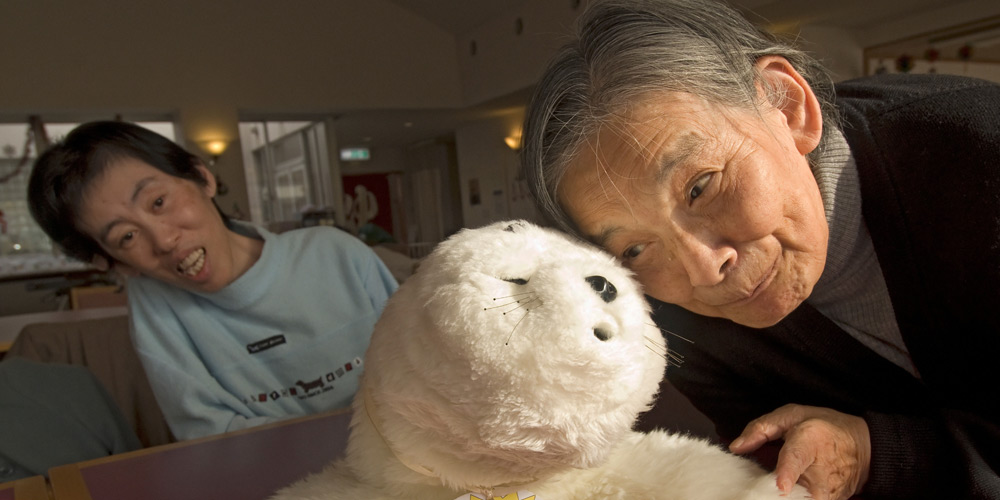 In nursing homes throughout Japan, an interactive, therapeutic robot is helping provide care to elderly residents. The robot’s name is Paro, and it looks like a baby harp seal, complete with fur, soulful eyes, and even whiskers. The technology inside Paro, which costs about US$3,800, is relatively simple: five sensors that pick up on touch, light, sound, heat, and posture. From that input, Paro recognizes people and their environment, and an AI component helps the device adapt to the preferences of its user. If you stroke Paro, it coos back at you, and it can learn over time to repeat the behaviors that led you to stroke it.

The idea of getting healthcare from a robot may seem to be the stuff of science fiction, but Paro is effective in calming elderly people with dementia and other cognitive disorders. A recent study found that loneliness rates decreased in a test group that socialized with the robot. Worldwide, about 5,000 Paros are in use, but Japan is the single biggest market for the device, with 3,000.

Paro was developed by Japan’s National Institute of Advanced Industrial Science and Technology, a government research facility. Other organizations in Japan are experimenting with similar kinds of technological solutions to the problems presented by an aging population. In part, that’s because the country is more open to the idea of robotics — one study found that 80 percent of Japanese people have positive feelings about the use of robots in healthcare — but it’s primarily because there are few other obvious options. Japan has the oldest population of any country on earth, along with a shortage of nursing staff, and both issues are likely to get worse. Cost is a factor as well, given that healthcare spending is going up, particularly for the long-term nursing care that elderly people often require.

These issues are playing out in many developed countries, but they are far more pronounced in Japan, which has thus become a pioneer in developing technological solutions to the critical problems of eldercare. (In October 2019, the health ministers of the G20 countries met in the Japanese prefecture of Okayama to look at some of the most innovative solutions Japan has created to care for elderly people.) For medtech companies that hope to get the right solution to market, Japan is becoming a proving ground — and the country’s aging problem represents a clear business opportunity.

A growing need for eldercare

About 28 percent of the population in Japan is 65 or older — the highest proportion among the Organisation for Economic Co-operation and Development member nations — and analysts predict that the number will increase to 38 percent by 2065. The country also has a low birth rate, creating a worsening crisis in which more elderly people need care and fewer young people are available to provide it. Japan projects a shortage of 337,000 nursing staff by 2025.

For medtech companies that hope to get the right solution to market, Japan is becoming a proving ground — and the country’s aging problem represents a clear business opportunity.

At the same time, healthcare spending is escalating — the cost of inpatient nursing care is currently about $98,000 per year, and projections are that it will rise to about $235,000 by 2030. More than half of people age 85 and above will require such long-term care. And Japan, like most other developed countries, faces fiscal challenges that require it to rein in spending. Given those conditions, robots are a potential fix.

The market for “care bots” is still relatively small, but Japan’s Ministry of Economy, Trade, and Industry expects the domestic industry alone to grow to ¥400 billion (US$3.8 billion) by 2035. The government is making a concerted push in this area — it has already spent nearly $100 million to develop nursing care robots — and that effort has yielded dividends. Japan manufactures more care robots than the next four countries combined. One of these robots, a device called Robear, helps caregivers lift patients into and out of bed; it was developed in part through government funding via a technology institute that applies science in solving real-world problems.

Similarly, Panasonic recently formed a collaboration with six Japanese universities to create robots for a range of functions, including helping the elderly. One such device, developed through a partnership with Nagoya University, helps older people walk without falling. It looks like the front half of a StairMaster on large, sturdy wheels, with a screen and handgrips, and it is equipped with an algorithm that helps the device adjust to a user’s gait. The goal is to promote independence by enabling people to continue walking without fear of falling or to recover after a fall. “We aim to offer nursing care that promotes independence, which we hope will then contribute to a reduction in medical expenses,” says Masanori Iida, an official at Panasonic’s Innovation Strategy Office. Panasonic also created a robotic bed called Resyone that transforms into a wheelchair to assist patients who can’t move around on their own. The device costs about $8,600, and demand is growing.

Panasonic has an unconventional approach to R&D for its care bots. The company operates about 50 day-care facilities for elderly people in Japan, along with several long-term inpatient nursing homes. By facilitating the care of elderly people at those sites, Panasonic gains firsthand insights into the needs of patients and nursing staff, along with insights into the kinds of innovations that could help close the gap between the demand for care and the available supply.

Another Japanese robotics manufacturer is Cyberdyne. The company’s headquarters is in Tsukuba, a hub of robotics innovation, which is home to several dozen research and education institutions and around 20,000 researchers. Cyberdyne’s main robot is called the Hybrid Assistive Limb (yes, the acronym is HAL), an exoskeleton with several applications, including a medical version that helps older people or patients with brain and nerve disorders.

HAL is unique in that it uses bioelectrical signals sent from a patient’s brain to his or her muscles to control the assistance provided by the device in real time. (It reads those signals through the skin.) This voluntarily initiated, patient-intended movement and the corresponding physical feedback allow HAL to improve and regenerate the patient’s physical functions. It’s a high-tech device for medical treatment that can help people walk on their own again. No other robot has this kind of direct link to a user’s intentions.

Cyberdyne’s founder and CEO, Yoshiyuki Sankai, says that the company’s core focus is finding solutions for aging-related fragility, but HAL was initially developed to help patients with severe nerve diseases, such as multiple sclerosis, spinal muscular atrophy, and ALS. “There are no effective drugs for these patients, but the Japanese Ministry of Health, Labour, and Welfare invited us to develop a creative, innovative device to help them,” says Sankai. The device can slow the decline of a patient’s physical function.

The medical version of HAL is now used in nine countries outside Japan (including, since 2018, the U.S.). But Sankai says the potential market is much larger, given that the device can be used to help train people to walk independently again. “There are [other] technologies capable of allowing a person to walk and to move when they use that device,” Sankai says, “but none is capable of actually improving and regenerating the walking function.” Recently, Japan’s Ministry of Economics began to certify robots capable of recovering functions of the human body, and the only example thus far is HAL.

Most exoskeleton devices rely on externally generated movements — the person inside the device is passive. Using the wearer’s own intention is more active, and that’s what HAL does. Sankai believes that this active and voluntary movement is the key to significant medical gains that could result from treatment with HAL.

The company recently finished clinical trials in Japan for the device with eight types of neuromuscular diseases, including ALS and muscular dystrophy, along with performing trials in Germany with spinal cord injuries and continuing a clinical trial for strokes, says Sankai. Cyberdyne is now seeking to accumulate more clinical evidence to prove HAL’s effectiveness in treating other diseases.

Another device manufactured by Cyberdyne is HAL Lumbar Type, an exoskeleton that users, including caregivers, can wear to help them with heavy weights — such as when lifting patients. The device reads the bioelectric signals of the user and determines the right amount of mechanical support to provide to the lumbar region. The same device is now used to help train elderly patients to sit down and stand up without assistance.

Because Japan has such a head start on the market for care bots, the government has taken steps to export some of the products abroad. For example, the Japan External Trade Organization (JETRO), a government organization tasked with facilitating overseas business expansion by Japanese companies active in the nursing-care industry, has created a directory (pdf) of manufacturers and service providers that aspire to market to medical communities abroad.

One firm that is successful beyond Japan’s borders is Triple W, a company that developed a wearable device to help elderly patients manage incontinence. That condition affects about 500 million people worldwide, and most solutions — wearing adult diapers, taking medicine, or undergoing surgery to implant a sensor to stimulate the bladder — are problematic. Triple W’s device, called DFree, has a built-in sensor over the bladder area that uses ultrasonic scans to monitor urine levels, after which it sends notifications to a mobile app. An alert lets people know to go to the bathroom (or signals a caregiver to help).

More than 500 nursing homes in Japan use DFree, giving the company a strong base from which to expand overseas, particularly to its target market of the United States. Triple W was one of 22 companies that JETRO showcased during CES in Las Vegas in January 2019, where the company was awarded the top place in the Digital Health and Fitness category. In all, DFree won eight innovation awards in the U.S. in 2019.

Triple W wants to build on its momentum and develop ultrasound sensors to monitor various vital organs for other aging-related problems. It has received additional funding from Japanese tech investors to do so, according to Triple W vice president Ty Takayanagi. “The fact that Japan has had to deal with aging before other countries contributed to developing a product like ours. There’s pressure on governments all over the world to manage the expenditure in healthcare as most countries struggle with a shortage of nursing staff. They are increasingly dependent on technology,” says Takayanagi.

There is no doubt that Japan’s aging society poses a range of challenges, whether rising medical costs or a lack of labor. The government can’t rely on technology alone to deal with these challenges. But as care bots and other technologies advance, they are becoming one promising part of the solution, tested in Japan and increasingly exported to the rest of the world.

Topics: eldercare, healthcare, healthcare technology, robotics, robots
Get s+b's award-winning newsletter delivered to your inbox. Sign up No, thanks