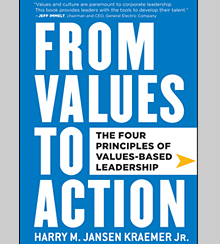 As a leader, you quickly learn what it feels like to be squeezed between lofty expectations and your own limitations. No leader’s performance is flawless. You can’t see around every corner, and despite your best efforts, your initiatives sometimes miss the mark. No leader is faultless. Sometimes you get angry and short, and you don’t always listen as carefully as you should. Sometimes you need to be reminded to treat everyone with dignity and respect and to recognize and thank others. In other words, you’re human.

The words human and humble both derive from the Latin humus, meaning earth. To be human and humble is to be down-to-earth, with your feet planted firmly on the ground. Interesting, isn’t it, how as you climb the ranks you also climb to a higher floor in the building, getting farther and farther away from the ground? Is it any wonder that the higher you go, the harder it gets to stay grounded?

That’s why it’s so important to think back to the beginning of your career. As Harry Kraemer explains in the following excerpt, that’s the place where leaders can find some of the most important lessons they’ll ever learn. We should all remember where we started. It would also serve us well to have the humility and grace to acknowledge that the amazing people who reside in the cubicles (“cubes”) are the ones who are responsible for most of our successes.

Excerpted from Chapter 4 of From Values to Action: The Four Principles of Values-Based Leadership

Back in the days when I was in the cube, I learned innumerable lessons every day about how the company worked. There were certain things that made perfect sense, and many others that made no sense at all. But when you’re in the cube, you’re supposed to carry out what “those guys” have decided.

My cube mates and I would often wonder what those guys were thinking when they made some of their decisions. Sometimes, the real mystery was what those guys did day in and day out. Our roles were clear: we ordered inventory, paid invoices, or collected receivables. But we couldn’t figure out what our boss or our boss’s boss was doing. It seemed as though they were continuously in meetings, and what was really scary was that they seemed to spend a lot of time meeting with each other instead of visiting customers, suppliers, and other people outside the company.

Often things seemed highly disorganized, and we wondered why those guys didn’t turn to one of us for help. Didn’t they realize that we were the ones who really knew what was going on in the company? For example, if orders weren’t coming in at their usual pace, we clearly knew that the company wasn’t doing well. But it appeared as if those guys were trying to figure out whether they should let us know that business was slow. Of course we knew — but we weren’t sure that they did.

Back in those days, it occurred to me that I might never get out of the cube. So, to amuse myself, I used to make lists of what I would change if I ever got to the next level. I didn’t do this as part of a plan to advance in the company. Rather, I wanted to capture all the things I observed firsthand in the cube, which one day might be of use to me and my colleagues.

One of the items on the list was never to call the staff in on a Friday afternoon and announce that such-and-such needed to be done by Monday morning. Whenever our boss did that, I always wondered where he was on Wednesday or even Thursday. Didn’t he know that this was coming up? Of course there could be an emergency or a sudden development, but these calls happened far too many times at five o’clock on a Friday for this to be a string of extraordinary events. Therefore, I vowed that if I ever became the boss, I would tell my team what projects, priorities, and deadlines were coming up as soon as I knew, so that we could avoid fire drills. That way, the team members could plan their time accordingly. Maybe someone would decide to stay late one night or come in very early the next morning if extra hours were needed. But I wouldn’t tell them so late on a Friday that the only option was to work most of the weekend.

I also thought that we could be much more productive with open and transparent communication. For example, I distinctly remember receiving a phone call from someone who had been one of my classmates in the MBA program at Kellogg. After exchanging pleasantries, he informed me that he was now working for a consulting firm that was handling a big project for the company. Then he told me that he was sending me a fifty-page fax with questions that I needed to answer in order for the consulting firm to gather in-depth information to present to my boss’s boss’s boss.

The phone call took me by surprise. I wasn’t annoyed that I had to do the paperwork. Rather, it seemed ridiculous that I was filling out these fifty pages for a consulting firm, which would then package the information and present it back to my bosses — and charge a hefty fee! Why couldn’t someone in my company call me for the information directly? Twenty years later when I was the CEO, when someone would ask me if we should hire a consultant for a particular project, I would reply that I was open to obtaining an objective third-party analysis. However, remembering my time in the cube, I would ask if it was remotely possible that one of the fifty thousand team members in the company already knew the answer that the consultant was supposed to give us. If so, we could not only save time, energy, and dollars but also avoid causing frustration for someone in a cubicle somewhere who was going to ask himself exactly what I wondered twenty years ago!

Little did I know back then that my lessons from the cube would become valuable as I was promoted, from my first job as a manager all the way to the C-suite. By following the principle of genuine humility, I remembered and appreciated the many good ideas and the great perspective in the cubes.

Throughout my career, up to and including when I was CEO, I benefited from the fact that I worked with a number of amazing people who were willing to prevent me from doing things that did not make sense. In other words, they kept me from becoming one of “those guys.” I can recall sending memos or e-mails within the company about what needed to be done. Although I would base my final decision on the best information I had at the time, there were often additional details of which I was not aware. I can imagine five or six people standing by their cubes discussing my latest decision after reading my memo. They probably knew that my decision did not make much sense. In fact, they knew that if they did what was asked in the memo, it would make the current situation worse, not better. If I had become one of those guys who thought he had all the answers, the people in the cubes would have shrugged their shoulders and said, “He’ll find out.”

Instead, because they knew I invited feedback, they told me exactly what they thought. They knew that I was the same guy I always was, and I truly valued everyone in the company. My view was that we were all in this together. Because of my attitude, it was a no-brainer for them to call or send an e-mail to me, letting me know that my plan could have some unintended consequences.