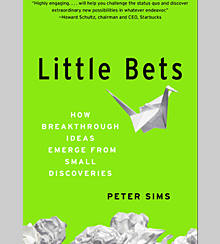 We spend a lot of time talking about how to innovate with a capital I these days. But maybe there is no fixed formula for innovation. Maybe instead of big R&D departments chasing big-bet innovations, we should be doing lots of little experiments throughout our companies and seeing what comes of them.

That’s what Peter Sims thinks, and in the excerpt below, he describes how Bill Hewlett and David Packard drove their company’s success by flouting the conventions of innovation. The secret of their success was intuition — informed by a closeness to users and an ability to sense their unmet and unarticulated needs — and passionate experimentation. This intuition and passion gave them the confidence to place small bets, even in the face of professional naysayers.

In those days, up-and-comers were routinely advised to steer clear of high-risk development projects, lest they be associated with a failure. But a rising star of today cannot hide from risky projects — they are the only surefire way to distinguish oneself. Just ask Steve Jobs. Would-be innovators can lower the risks, according to Sims, if they cultivate a yen for learning and challenging assumptions and a willingness to test and refine new ideas and take calculated risks. Anyone who does those things can have a go at this most delicate and fulfilling human endeavor.

An excerpt from Chapter 1 of Little Bets: How Breakthrough Ideas Emerge from Small Discoveries

[Ned] Barnholt is the former CEO of Agilent Technologies, but these days he’s one of the more respected executives in Silicon Valley, kind of a senior business statesperson whom people trust. Now in his late sixties, he’s a board member at eBay, KLA Tencor, and Adobe. A number of Silicon Valley CEOs consider him a mentor. You wouldn’t guess all of this if you met him. Barnholt is a gentle man: genuine, calm, and even tempered. He comes across as grandfatherly.

Before Agilent, the measurement company that was spun off from Hewlett-Packard in 1999, Barnholt worked at Hewlett-Packard for more than thirty years, during which he witnessed and helped build one of the most innovative companies ever. The company had had a remarkable history, averaging 18 percent annual growth from 1939 to 1999 but, by the mid 1990s, the challenges mounted. HP had grown so large, to about $30 billion in sales, that Barnholt and other senior managers felt pinched to reach their double-digit growth goals. The research on innovation identifies this as a common problem for managers as companies grow. Barnholt calls it the tyranny of large numbers, explaining that “there’s a natural tendency to think in terms of bigger bets as you get to be bigger.”

To launch these big new businesses, the company’s managers took rigorously logical steps. They worked on numerous initiatives in large, growing markets that were adjacent to or somewhat related to HP’s existing business. However, they only looked at opportunities that were already billion dollar markets. Barnholt recalls, “Around that time, people said, ‘We don’t even want to look at opportunities unless it was going to be a billion dollar business.’ A billion dollars kind of became a mantra.” They then researched and analyzed the markets, segmented them, and developed products. If the idea got far enough, they developed marketing campaigns, sales strategies, and launched them. As Barnholt recalls, “It was very much a deductive, analytical process to identify a grand set of opportunities.” Possibilities included areas like flat screen displays, uninterruptable power supplies, or smart utility monitoring of homes. “We had all these ideas. And they were all big,” Barnholt recalls, “but they all failed!”

Able to grin about it now, Barnholt went on, “The reason they all failed and the reason they were big is that someone was already there.” To borrow a phrase from Silicon Valley consultant and author Eric Ries, they “achieved a failure.” Their ideas made sense. The technology was great. They executed on their plans well. But they still failed.

HP’s assumptions turned out to be wrong because of what Barnholt calls intangible factors, the realities beneath the surface: the underlying customer problems, needs, preferences, and supporting market dynamics. They were not discovering new opportunities or developing new products, they were relying on the success of competitors to identify the areas they targeted. They weren’t being creative. Barnholt then leaned back in his chair and summed up the experience by saying: “That’s how I learned the importance of making a lot of little bets.”

Ironically, a much more creative discovery and experimental approach to innovation had been central to making Hewlett-Packard into a market-leading behemoth. According to HP veterans, including Chuck House, who also coauthored a history of the company called The HP Phenomenon, in earlier years, cofounder Bill Hewlett loved to make what he called small bets to uncover unpredictable opportunities. That approach helped HP pioneer handheld calculators. In 1972, HP’s first calculator, the HP-35, would retail at $400 at a time when the market for scientific calculators did not yet exist. The technology was remarkable and the calculator could fit into your pocket. But the price tag was hefty, especially at a time when the alternative was inexpensive slide rules. People inside HP were torn about what to do. So, they hired SRI International to do some market research. SRI was then considered the premier computing research group. They had done pioneering work for General Electric, RCA, and others. “They knew more about computing than anyone,” House recalls, “and they said, ‘This thing can’t sell.’”

Bill Hewlett wasn’t so sure. He had just spent several hours on a plane talking about the HP-35 with the person next to him, who thought it was amazing. Hewlett suggested, “Why don’t we build a thousand and see what happens?” It was an affordable bet. Within five months, HP was selling one thousand calculators a day and could barely keep up with the demand.

For many years, when Bill Hewlett and Dave Packard led HP, the company never did traditional market research. Instead, HP got most of its ideas for new products by informally observing or talking with customers to identify problems and needs. HP’s first computer, in fact, began as a small bet after customers using HP voltmeters (an instrument for measuring electric circuits) complained about not being able to transcribe the meter’s six digital readouts per second. “So, the guys at the [HP] lab said, ‘You know, we’ve heard about these “computer things.” Suppose they could grab the data?’” House recalls. Reflecting on his experiences, Ned Barnholt came to a similar point of view and said, “A lot of our most successful ideas over the years came from the bottom up, by really understanding user needs.”

Reprinted by permission of Free Press, copyright © 2011 by Peter Sims.