Pop quiz: You’re the CEO of a trade publishing house. Do you split your company’s acquisition budget among as many promising authors as you can find and launch their books with minimal hoopla, or do you spend the lion’s share of your budget on huge advances for one or two authors who have already published bestsellers and then spend big bucks promoting and advertising their new books? 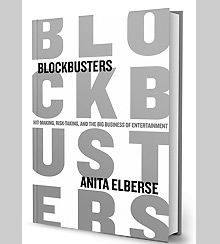 I lean toward the former strategy. I’d sign a lot of authors—limiting my downside on each and keeping my pipeline full of new product, while betting on my own ability to pick the next Stephen King or J.K. Rowling out of the slush pile.

Unfortunately, however, I’d be wrong. Not just because I’m a snooty reader who would have chucked most of the mega-selling manuscripts of recent years into the trash can after reading a couple of pages, but also because Anita Elberse says so.

Elberse, the Lincoln Filene Professor of Business Administration at Harvard Business School, is the author of Blockbusters: Hit-Making, Risk-Taking, and the Big Business of Entertainment (Henry Holt, 2013). In it, she argues that the most successful media and entertainment companies are those that make big bets on big names and then concentrate all of their marketing might on selling them. Elberse makes her case with a broad and mainly anecdotal base of evidence, including Radiohead and Octone Records in the music industry, Warner Bros. and NBC in the film and television business, LeBron James and Manchester United in professional sports, and Grand Central in the publishing world.

There are a couple of interesting things about the blockbuster strategy. One is that it might protect big players from the kinds of disintermediation that the newspaper and magazine businesses have experienced: People uploading homemade videos on YouTube probably aren’t going to take down the James Bond or X-Men franchises. That’s because blockbusters generate volume sales. In a reprise of her argument against Chris Anderson’s declaration that the “long tail” enabled by digitization would create a radical shift in demand away from blockbusters, Elberse explains that the top 13 titles generated 7 percent of all album sales in 2011 and the top 1,000 titles generated about half of all album sales. Meanwhile, the bottom 513,000 titles (60 percent of the total) generated a measly 0.5 percent of total sales.

Another notable aspect of the blockbuster strategy is Elberse’s assertion that it applies to a variety of industries. Of course, it’s commonplace in the pharmaceutical industry, where the loss of patent protection on billion-dollar drugs often devastates earnings.  She also sees it at work in the hospitality industry (Marquee nightclubs), consumer products (Apple), and apparel (Victoria’s Secret). Elberse’s conclusion: “All in all, it is time to rewrite Irving Berlin’s 1954 blockbuster There’s No Business Like Show Business—the business world at large, it turns out, can learn quite a bit from the entertainment business.”