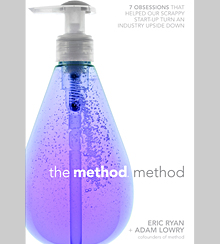 The best customer experiences tend to come from companies with major service components, like Disney and Ritz-Carlton. Their business models place them face-to-face with customers, and their fortunes rise and fall on their ability to provide compelling experiences, as Starbucks discovered a couple of years ago. But most product companies, especially those that don’t sell directly to end-users, don’t think quite as rigorously about customer experience.

Enter Method Products. Method is one of those delightfully quirky entrepreneurial stories. In the late 1990s, two 24-year-old guys — an ad man and a climate researcher — take off on a ski weekend and decide that the home cleaning products industry is ripe for a shakeup. Never mind that it’s a mature, relatively stagnant market dominated by powerful brand names like Procter & Gamble and the Clorox Company. Never mind that everybody else is starting e-businesses. Never mind that they are two 24-year-old guys on a ski weekend talking about cleaning products. By 2010, their privately held company is generating annual revenues somewhere north of US$200 million; it counts major retailers, including Target, Whole Foods, and Auchan, among its accounts; and the big dogs are tracking it.

How did Method do it? One way, as detailed in the excerpt below from the new book by Method cofounders Eric Ryan and Adam Lowry, was by zeroing in on the abysmal experience associated with so many home cleansers, such as the eye-tearing, nose-burning, skin-irritating sensations that can transform a minor decision about who is going to clean the bathroom into a domestic negotiation of epic proportions.

Excerpted from “Obsession 6” of The Method Method: 7 Obsessions That Helped Our Scrappy Start-Up Turn an Industry Upside Down

So to achieve high levels of loyalty, today’s new brands have to focus their resources on a select few functional attributes on which they can double down — often requiring them to divert resources from less important ones. An example in nearby Berkeley, California, is Berkeley Bowl [Marketplace]. It’s a foodie’s paradise, with a ridiculous selection of fresh produce and exotic goods. Problem is, it’s a customer-service nightmare, with long checkout lines, overwhelmed stockers, and crowded aisles. The store purposely overinvests on delivering great selection while willingly sacrificing on service. Walking through the store, you can’t help but wonder, “Don’t these guys value customer service? Is the produce that good?” For a select group of devoted Berkeley residents, it is — and Berkeley Bowl has built its business on that emotional response. Most of us, however, would rather go to a place that satisfies our desire for strong quality and great service. This is the most effective way to deliver emotionally distinct experiences — by linking them to your brand’s “shared values” with a specific consumer. This reinforces the importance of mission, purpose, and POV [point of view]. And emotional connections via shared values can be built faster than you might think! That’s why, at Method, we match the sensory experience to our advocates’ shared value for “the love of clean.”

Let’s start with the toilet. Toilet bowl cleaner is a great example of the importance of ensuring that every experience has a strong functional side. This was one of the first products we wanted to do back in 2001, but Method didn’t enter the category until 2008. The tale of how Lil’ Bowl Blu made it to market after seven years of trial and error is a testament to our unflagging devotion to winning on product experience.

Purifiers of porcelain, sanitizers of stool — toilet bowl cleaners (TBCs) were on Method’s hit list from the very beginning. Sure, they aren’t glamorous, but they represent everything we wanted to change about the industry. First off, they are ugly — the black sheep of the home-care family. Everyone has them but would rather forget about them. Worse, they are among the most toxic products in the home, literally covered in warnings and instructions for contacting the nearest poison control center if you accidentally ingest even the tiniest amount. Most odious of all, they suck to use. Consumers either have to lift off the heavy lid to get into the grimy tank every few weeks or get down on their knees and scrub away, their face just inches from the smelly bowl.

Ugly, toxic, unpleasant to use — toilet cleaners were right in Method’s sweet spot. Soon after setting up our first lab, we began experimenting with nontoxic cleaning agents for the toilet. Problem was, toilet cleaners were toxic for a reason; phosphates and strong acids were the only things strong enough to wipe out the formidable brew of mineral deposits, rust, and bacteria that toilet bowls are famous for. There were organic cleaners on the market, but they were nowhere near as effective — and the toilet bowl was the last place people wanted to cut corners on effectiveness. Even the most environmentally conscious home owner was generally willing to overlook the skull and crossbones on the back of the bottle if the front of the bottle promised to kill every last germ.

Our team of green chefs tried liquids, creams, and gels. They sent prototypes home with employees, complete with powders, scrubbers, and sponges. Nothing worked. There was constant temptation to do something substandard because we just couldn’t make organic acids work as well as inorganic, toxic crap. But we didn’t.

Years passed as we chased the formula like a white whale. No matter how desperate the company was for revenues, no matter how much advocates wailed about how the company was “missing a huge opportunity” (and a toilet cleaner was by far the most requested new product), Method still refused to put out a product that didn’t work as well as or better than its mainstream, toxic rivals. Then in early 2008, one of our engineers cracked the code that had stymied every Method green chef. Employing lactic acid in combination with some novel renewable surfactants, he finessed a liquid formula strong enough to clean as well as the big brands (without any scrubbing) and safe enough that consumers could rub it on their hands without poisoning themselves. Having waited the better part of a decade for a TBC that satisfied the brand’s uncompromising obsession with product experience, Method didn’t wait a minute more. Debuting in a bladder-shaped bottle and eucalyptus mint scent, Lil’ Bowl Blu went straight to national distribution.

Delivering on emotional experiences means engaging the senses, for the senses are the fast track to human emotion. But how many brands actually make full use of them? When people talk about “clean,” they usually describe it as the “feeling of clean.” Yet there was nothing that felt clean about most cleaners. The sensory experience of using cleaners requires you to hold your breath when using them, leave the room afterward, and then hide the package under the counter because it’s so ugly. Somewhere in the history of clean, consumers had been made to believe that if it doesn’t make you cry, it must not be working. What’s clean about that? We created a new sensory experience with a clean design that appeals to our aesthetic sense, formulas that let us actually feel clean, and fragrances that make a room smell beautiful — not like bleach. We also work to add touch experiences with packaging that is organic in shape and includes interesting materials that invite touch. The result is a superior sensory experience that elevates the mundane task of cleaning. All great brands have rational, emotional, and sensory values, so we work hard to ensure that Method delivers on all three.

Excerpted by arrangement with Portfolio/Penguin, a member of Penguin Group (USA) Inc. Copyright © 2011 by Eric Ryan and Adam Lowry.

Topics: research, brand, stores, design
The business insights you need to succeed. Get s+b’s best ideas delivered to your inbox twice a week.
Sign up         No, thanks