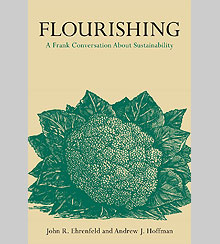 John Ehrenfeld is a friend and valued mentor, yet because I am one of those consultants that he says “tout sustainability as the new way toward profits and market share,” I sometimes find myself in his crosshairs. That can be a sobering experience, but I’m grateful for his fierce and honest critique, which is reprinted below from a new book that marries Ehrenfeld’s writings and his interviews with his former student Andy Hoffman. The book is grounded in a truth that too many of us ignore: Superficial tweaks to business as usual will do little to transform the structural and infrastructural fallacies of the modern global economy.

Ehrenfeld, playing the hard-nosed engineer-as-curmudgeon, reminds us that “less bad” isn’t the same as “good.” And he has the professorial chops to smack down analytically dubious ways of ranking sustainability progress, and an activist’s recognition that power rarely yields voluntarily.

Nevertheless, if we are to flourish (a good word that Ehrenfeld chooses to evoke a vibrant and inviting future), sustainability as a path to profits and market share is a necessary strategy to enlist companies and capital. We’ll also need to stop the economic and political manipulations that disguise and pass off the real costs of business as usual, invest heavily in ecologically smart infrastructure, figure out how to walk away from the 80 percent of fossil fuel that must stay in the ground, and yes, join Ehrenfeld on the occasional trip to the barricades.

An excerpt from chapter 4 of Flourishing: A Frank Conversation about Sustainability


What companies really are doing when they promote sustainability is, at best, incremental in scope. At worst, they are creating harm by fooling us into thinking we are solving the problem. Corporate sustainability programs are virtually all based on efforts relative to what they would have done according to business as usual (BAU). I call this business almost as usual (BAAU). Awareness of the unintended consequences of the way they went about their business in the past has not sunk in, though it is being talked about at higher levels in firms than it used to be. The number of books and consultants that tout sustainability as the new way toward profits and market share is enormous. I use the pejorative term tout purposely here because I believe that the authors and consultants know (or should know) at some level that the profit part of their spiel may be valid, but the sustainability part is mostly bogus.

One aspect of BAAU toward which I direct particular scorn is the idea that we can distill the “attractive” features of products, companies, schools, and so on into a single “score” that captures the essence of their sustainability. Walmart has announced plans to rate the sustainability aspects of the hundreds of thousands of products it sells. We have green ratings of college campuses (Sierra Club Cool Schools); green MBAs (Beyond Gray Pinstripes, now discontinued); corporations (FTSE4Good; Dow Jones Sustainability Index; Newsweek’s 500 greenest big U.S. corporations); and safe, healthy, green, and ethical products (GoodGuide).

The idea of ranking things is an old and frequently useful idea. As to the truthfulness and utility of each scheme, however, the devil is in the details. The outcome of any rating system that combines more than a single factor into a score depends entirely on the arbitrary choice of metrics and the weights used in combining them. To be perfectly honest, Newsweek should have labeled their listing as the “Greenest Big Companies in America, based on our subjective combination of three independent organizations’ scoring of environmental impact (45 percent), green policies (45 percent), and reputation (10 percent), normalized to 100 as the top score, all to sell more magazines.” They provide just enough information to allow a careful reader, armed with more detailed data, to try to interpret the ratings. But few people are such careful readers, and so the ratings take on a life of their own.

The components used in the scores, just like the scores themselves, are merely estimates and have little connection to reality. Everything that has gone into the Newsweek ranking is arbitrary; from the use of revenue to normalized impact scores to the choice of weighting factors and the use of z-scores. Early twentieth-century English philosopher A. N. Whitehead called this kind of error the “Fallacy of Misplaced Concreteness.” Even if the numbers were algebraically correct, the real difference between a score of 98.87 and 98.56 is of no meaningful consequence. It is ingenuous to conceal this arbitrariness behind four significant figures. The tangible result of these scores allows the magazine to sell more issues and some firm to boast about being Number One or Two, as if that meant something special.

But, special to whom? Maybe to the stockholders or some regulatory agency or a prospective employee, but the party with the most interest in the matter is Mother Nature, and her question might be, do these numbers have anything to do with how you are treating me? Maybe in some small way, but not in any way that is directly correlated with how badly our environmental world is faring. Mother Nature cares only about the upset we are causing her, not about the intentions or reputation a company possesses. The environment is affected by the actions we take, not by our good intentions or what people say about us. Green policies are just writing on a piece of paper; they mean little until enacted. More than fifteen years ago, my MIT students found that companies that sign on to voluntary, industry-based regulatory programs show great disparities in how they perform under the programs.

Reprinted with the permission of Stanford University Press. Copyright © 2013 by the Board of Trustees of the Leland Stanford Jr. University