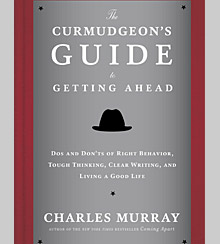 No one likes being bossed around. At age 8, I lodged a quiet protest over my mother’s weekly requirement to change my bed by putting the clean sheets in the laundry hamper and leaving the dirty ones in place. In my peanut-butter-and-jelly-addled brain, it was a victory over oppression. I was proud of my sneakiness—a pride that fed my ego, but also, I realized later, stunted my growth.

An overly developed ego can impede a career as well. It’s always tempting to revolt when bosses have treated us badly. But we should be disciplined enough to take a step back and dispassionately analyze the situation, just as Charles Murray advises in the excerpt below.

If your boss’s behavior appears to be criminal, by all means resist—and reach out for help. But bad bosses are more likely to be incompetent or boorish. That’s when it’s worth remembering that getting ahead usually involves more interdependence than independence. And interdependence requires humility above all.

Maybe your boss is a narrow-minded control freak, but you might be able to make that work for you. Or maybe you’re wrong about your boss. After all, it can be hard to like people who give us negative feedback or push us beyond our comfort levels. In any case, take the time to think it through. As my mother taught me, self-discipline is a lot less painful than regret.

An excerpt from chapter 9 of The Curmudgeon’s Guide to Getting Ahead: Dos and Don’ts of Right Behavior, Tough Thinking, Clear Writing, and Living a Good Life


You’ve been working at your new job for six months, let’s say, and you’re so unhappy with your supervisor that you’re considering quitting. Here’s what you need to think through: Exactly what is bothering you?

There is one immediate deal-breaker: The boss asks you to do things that you believe to be unethical or otherwise morally wrong. In that case, you should be prepared to quit. Before you actually take that step, however, go to some other senior person in the organization whom you respect and tell that person your story. If the result satisfies you, fine. If effective action isn’t taken, quit. When you’re in your twenties and you don’t have a family to support, there’s no reason to compromise your integrity to keep a job.

What about a boss who is a nice person but incompetent? The incompetence might take many forms. Perhaps your boss is a lousy manager, giving contradictory instructions, failing to check whether his instructions have been carried out and unable to meet deadlines. Perhaps he makes factual or computational errors in the products he turns out. Perhaps he misunderstands the instructions given to him from above and sends you off on a task that you know his supervisors didn’t have in mind. Whatever the specifics, it’s quite clear: Your boss doesn’t know what he’s doing.

You have to ask how much his incompetence is holding you back. If you are trying to acquire a specific skill set, the answer may be “a lot.” If you want to improve your craft as an editor in a publishing house, for example, it is important that you work under someone who is a terrific editor. The less specific the skill set, the more likely that you aren’t losing much because of the boss’s incompetence. You can learn a lot about good management by working under someone who is a bad manager.  Sometimes incompetent people delegate so much work to their subordinates that you find yourself given meatier tasks than you would get from a more competent supervisor. Unless you need a boss from whom you can learn specific technical skills, you might as well stay on the job, though you might want to quietly test your alternatives in the local job market.

“You can learn a lot about good management by working under someone who is a bad manager.”

What about the boss who is a jerk? It depends on what kind of jerk he is. Let’s start with the most notorious kind of office jerk, the sexist male who makes life miserable for his female colleagues or subordinates. I don’t want to minimize how trying and even frightening it can be to deal with such a situation if you are a young woman new to the workplace and the jerk is a much older senior employee. But if you find yourself in such a situation, remember two things. First, even the hint of a formal sexual harassment complaint scares employers, who badly want to avoid the legal hassle and the financial costs that a complaint entails, and should scare the sexist jerk even more—his job can easily be in jeopardy. Second, you shouldn’t assume you have to do battle all by yourself. Every office I’ve ever worked in has had sagacious women who would have been wonderful counselors and advocates for a young female employee who is being harassed. And let me put in a word for male curmudgeons. Most of us see ourselves as gentlemen. You don’t have to approve of our antediluvian mind-set, but there’s something to be said for having a senior male in authority who detests men who maltreat women or take advantage of underlings. You can come talk to us too.

The same generic advice applies if you are black and have a racist boss or you are gay and have a homophobic boss. You have legal options for responding, but they aren’t your only options. Don’t underestimate the decency of the other people in your workplace, including the curmudgeons.

Next we come to jerks who are merely unpleasant. They are crude, controlling, ill-tempered, or otherwise offensive. How you react depends on how good they are professionally. When they are very good at doing something that you want to become good at, I’d stay on the job. The best of all possible ways to improve your professional skills is to be around such a person. The woman who inspired The Devil Wears Prada might have been a terrific pain to work for, but she apparently knew her stuff better than just about anybody in her business, and working as her assistant was probably an invaluable experience. The less spectacularly talented your boss is, the less reason you have to stay.

But in all cases when you have problems in your interactions with your boss, there’s one more question you have to ask yourself: To what extent is your boss at fault, and to what extent are you a neophyte about supervisor–subordinate relationships? Some of you have reached your twenties without ever having been treated as a subordinate and you are not used to it. What you see as arbitrary, insensitive, or hostile behavior on the part of your boss may be nothing more than the way in which supervisors have been treating subordinates from time immemorial. People in charge don’t always feel the need to say “please” when they tell you to do something. They may receive a report that you worked on all night without the slightest indication of gratitude. They may answer your request with a gruff “No” without feeling any need to explain. They may be indifferent to the problems you have overcome. (A boss in my youth had a sign on the wall reading, “Don’t tell me about the storms at sea. Just tell me when the ship’s coming in.”) So if you think you have a bad boss, first go to a quiet room, look deep into your soul, and determine whether you are a victim or a self-absorbed naïf.

Copyright © 2014 by Cox & Murray Inc. Excerpted by permission of Crown Business, an imprint of the Crown Publishing Group, a division of Penguin Random House Inc. All rights reserved.