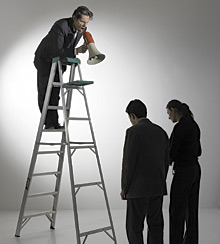 More than one-third of workers in the United States have been pushed around by upper management, meaning their bosses have belittled, sabotaged, or yelled at them, according to a study from research firm Zogby International and the Workplace Bullying Institute, a nonprofit organization focused on raising awareness of threatening behavior at work. This paper, based on four different studies involving nearly 400 participants, finds that abusive bosses are driven by more than just ambition and the need to feel powerful (as previous theories have supposed). In fact, the authors conclude that aggressive behavior on the part of managers is often the result of self-recognized incompetence; in other words, vindictive bosses may be in over their heads — and their feelings of inadequacy cause them to take out their frustrations on subordinates.

The studies included an experiment in which participants, through a writing exercise, were made to feel either skilled or inadequate at their jobs. Subsequently, they were told that they could choose either a quiet buzzer or a loud horn to notify a subordinate that his or her answer to a question was incorrect. The “incompetent” cluster largely opted for a loud blast from the horn. In another experiment, participants received either an ego boost or criticism about their leadership abilities. Then, in a role-playing exercise, they portrayed teachers who were given the option of helping or hindering a student’s chance to win US$20 by correctly answering a series of questions. Those with bruised egos were more likely to sabotage the student’s opportunity by selecting more difficult questions.

Bottom Line: Fear of incompetence is more likely than a desire for power to drive many aggressive bosses to bully their subordinates.