Russia’s banking system, like many banking systems worldwide, has been rocked by the global credit crisis, forcing the government to bail out several midsized banks and offer guarantees to depositors. Foreign investors have also pulled out of the country, exacerbating Russia’s liquidity problems. But these recent panic-induced actions obscure what was fast becoming — and in our view remains — a unique growth opportunity for foreign banks.

Russia as a place to invest? It’s hard to imagine many CEOs of global banks warming to the idea, especially in today’s financial climate, when expansion is an unlikely priority. And, on the surface, there isn’t much to inspire confidence in a Russian investment strategy. The country’s controversial military action in Georgia this summer has been succeeded, in the recent financial meltdown, by stock market declines so gut-churning that the Russian government on a few occasions shut down the national bourses. Still, writing off Russia as a future investment possibility is not the right move for bankers. Despite its economic and political complexities, Russia offers foreign banks a number of reasons to take a closer look.

The first is Russia’s economic emergence. With a 2008 gross domestic product that is likely to be three times that of Poland’s, Russia is the largest of the emerging economies across central and eastern Europe and one of the fastest growing. Although the recent slump in oil prices has slowed its escalation, oil is still costly enough to contribute significantly to the economy. Russian commodities industries are also surging, and industries such as telecom and media are maturing. This overall growth is benefiting the general population, almost one-third of which will be earning between US$35,000 and $50,000 within the next five years, according to our forecasts. Currently, only 8 percent of the population is in this income bracket. Members of this growing middle class will be easy to reach via bank branches; about seven in 10 Russians live in an urban area.

Rising incomes have already benefited the nation’s banks: Their assets under management have grown an average of 49 percent for the past five years, and their aggregate revenue was $55 billion in 2008. That growth should continue, albeit at a slightly slower pace, and will push annual banking revenue to $100 billion by 2013.

If the Russian banking system had a few dominant players or a history of excellent service, this growth would represent an opportunity primarily to its established banks. But the system has neither. Most of the biggest banks are state-owned — not a unique situation in this era of overnight nationalization but also not a recipe for innovative service or flexible management. And with the exception of the state-owned Sberbank, which has 24 percent of Russia’s assets, the banks are small; most have market shares below 1 percent. Consolidation looked like a sure bet even before the current financial crisis unfolded; the only question was when it would begin. With consolidation now under way, it is just a matter of which of Russia’s 1,200 banks it will affect, and how substantially.

The lack of structure in the system is creating an opportunity for foreign banks at a time when the Russian oligarchs are retrenching, local investors are panicking, and the country’s politicians are wondering how low oil prices will go. Although we don’t suggest that there is a tried-and-true way to enter the Russian banking market — risks abound — two unmistakable areas of opportunity should be explored. The first is Russia’s expanding base of middle-class urbanites, those mentioned above, in the $35,000 to $50,000 income range. This segment is an alluring target for a foreign bank skilled at retail. The second opportunity lies with the large and midsized Russian companies that are growing and looking for corporate and commercial banking services. Although those companies may be in danger of being dragged down with the price of oil, we believe Russia’s economy is no longer perched on a single stilt.

The risks of entering this market are real. Russia, like almost every other country in the world, has spent the last few months struggling to contain the effects of a worldwide financial contagion. The country is a political enigma, and has been widely criticized by the West for the conflict that broke out in Georgia this summer. Russian workers now have greater access to jobs, which can hinder a foreign bank’s ability to get and keep good employees. And Russian regulators have a reputation for a sort of activism that can be painful for foreign companies. An example is Russia’s denial of a new work visa to Robert Dudley, the foreign-born CEO of TNK-BP — a joint venture formed by the merger of BP’s Russian oil and gas assets and the oil and gas assets of Alfa Group and Access/Renova Group. Some observers speculated that Dudley’s visa troubles were the result of his Russian partners’ desire to oust him from the alliance, leaving them in control of the operation.

Fortunately, most of these risks represent separate issues; they are not interconnected in a way that could bring down the country’s whole business environment. Russia is confronting its financial problems head-on, and recent news reports that two state-owned banks, Sberbank and VTB Bank, have been considering an investment in London-based Barclays PLC suggest that Russia has the capital to stabilize its own banking system. Furthermore, at least some of the risks of operating in Russia can be mitigated — foreign banks can address the challenges of hiring and retaining workers, for example, by offering above-market pay. Other risks will likely fade over time. For instance, the Russian regulators who have been so heavy-handed may now become active in a more positive way — encouraging foreign buyouts of, or capital investments in, weak banks. To the extent they do so, it may give non-Russian banks a gateway to the market.

For those still not convinced the opportunity exists, there is a precedent for foreign banks entering Russia during difficult times. A decade ago, as Russia was struggling with a crisis that drove inflation to 80 percent and led to 200 bank closings, Austria’s Raiffeisen International Bank Holding AG decided to enter the country. Expanding from an initial base of two banks in Moscow, Raiffeisen has maintained its investment program and, after two acquisitions, has almost 250 bank branches and some $20 billion in assets, putting it on a par with any non-state-owned bank in the country. Raiffeisen wouldn’t be in such a promising position if it hadn’t invested at a time when others were getting out. That’s a history lesson that shouldn’t be ignored.

How the Fed came through the pandemic
An account of Jay Powell’s tenure as chair of the US Federal Reserve details a transformation from lender of last resort to the backup lender to the entire world.
by Mike Jakeman 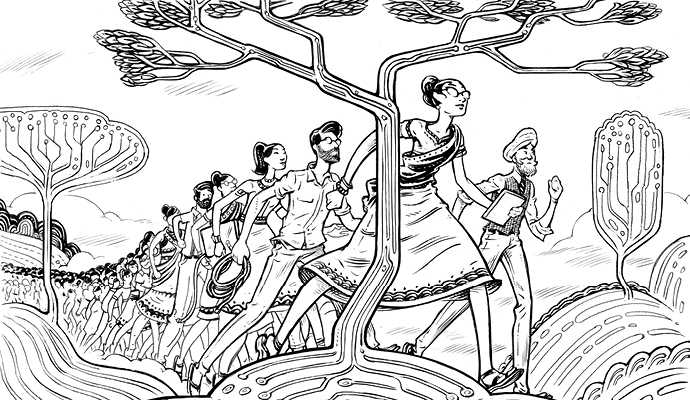 What the world can learn from the India Stack
India’s identification and digital payments infrastructure can show business and government leaders worldwide how to work together to improve financial inclusion and economic growth.
by Deepa Krishnan
Digital issue