I believe that brewing beer is one of the great humanitarian professions. If you agree, you already know that it’s a terrific time to be a beer drinker. Even the most committed among us are hard-pressed to keep up with the burgeoning numbers of high-quality beers being produced by small, independent breweries from near and far. 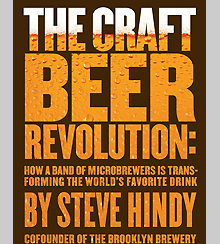 Steve Hindy traces the heady explosion of craft brewers in the U.S. over the past 40 years in his new book, The Craft Beer Revolution: How a Band of Microbrewers Is Transforming the World’s Favorite Drink (Palgrave Macmillan, 2014). Hindy is an expert guide: He was a Middle East correspondent in Beirut for the Associated Press when he became interested in home brewing. In 1988, when he was back in New York, he and Tom Potter founded The Brooklyn Brewery, which is now ranked among the top 20 breweries in the U.S. in sales volume—and that’s including the big brewers, like Anheuser-Busch Inc. and MillerCoors.

The stories of the craft brewers—such as Fritz Maytag of Anchor Steam and Jim Koch of Sam Adams—featured in the book are engrossing, but what I find most interesting about this story is the evolution of the beer industry, and the lessons it might hold for the big players in other industries. Historically, beer was a local product. According to the Brewers Association, there were 3,200 U.S. breweries in the 1870s. Then, over the next 100 years, technological advances and the drive for economies of scale changed all that; by 1978, there were only 89 breweries owned by 42 companies in the United States. Local beers were few and far between, and supermarket beer coolers were boring as well as cold. Now fast-forward to 2013—more than 2,800 breweries were operating in the U.S., 98 percent of which were owned by local brewers.

The big brewers and their now-global brands are still dominant in the U.S. marketplace, and they are fighting over fractions of a point in added market share with US$3 million Super Bowl ads in a market that is slowly shrinking. Meanwhile these pesky craft brewers have grabbed a 10 percent share of market. Their share is growing, and more and more of them are entering the fray every day.

It’s reminiscent of the process described in Clayton Christensen’s book, The Innovator’s Dilemma: When New Technologies Cause Great Firms to Fail (Harvard Business School Press, 1997). In this case, however, technology didn’t play the primary role in the disruption of the beer industry. In the 1970s, at the peak of Big Brewing, the U.S. government reduced the excise tax for small volume brewers and legalized home brewing for the first time since Prohibition.
“At the time,” writes Hindy, “I don’t think any of the players involved imagined that these measures would pave the way for the craft beer revolution. But they did.” The reduction in tax gave a respite to small brewers, who couldn’t compete against the scale and marketing might of the big players. Home brewing eventually brought new brewers into the market as entrepreneurially minded home brewers started new businesses. The stage was set for a “back to the future” scenario, in which the number of breweries in the U.S is approaching levels that haven’t been seen in about 140 years.

The number of breweries in the U.S. is approaching levels that haven’t been seen in 140 years.

The best part is that this process of industry disruption has created a sort of golden era for beer drinkers. Although at the risk of incurring Brooklyn’s wrath, I admit that I haven’t yet acquired a yen for Hindy’s beers. Maybe that’s because I’ve only tried a couple of them, bought in bottles hundreds of miles from the brewery. But I’m a big fan of the packaging, designed by Milton Glaser—and I’ll keep tasting.