Maybe it’s time to to pull the plug on the idea of managing different generations in the workplace in separate ways. We’ve now got the last few members of “the greatest generation,” baby boomers, gen Xers, millennials, and—depending on how you define them—members of gen Z working together. It seems impractical to ask managers to remember the traits, needs, and desires of five generations, let alone adjust recruiting, training, perks, policies, and interpersonal style to the generation in question. 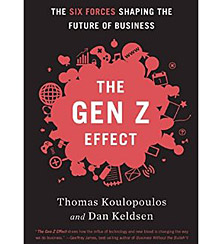 If Thomas Koulopoulos and Dan Keldsen are right, the complexity associated with a multi-generation workforce will only get worse in the coming decades. “By 2080, increasing life expectancy, together with shrinking intervals of technology turnover and innovation, will create an unprecedented 15 generational bands in the workplace, based on each band being about four years in span and expecting people to work from age twenty to age eighty,” they write in The Gen Z Effect: The Six Forces Shaping the Future of Business (Bibliomotion, 2014).

I don’t know if I fully subscribe to the idea that meaningful generational differences are going to appear so quickly, but even the thought of additional employee age cohorts requiring distinctive approaches sounded so daunting to me that I almost stopped reading the book. But then, two sentences in bold print caught my eye:

“Generational thinking is like the Tower of Babel: It only serves to divide us.” Why not focus on behaviors that can unite us?”

“Generational thinking is like the Tower of Babel: It only serves to divide us.”

Koulopoulos and Keldsen think that companies should stop managing for generational differences with gen Z, a demographic cohort that is often pegged as beginning around 1995. Why this generation? “These kids are not just digital natives, they are hyperconnected junkies whose expectations will radically change business forever,” write the authors.

This might seem like hyperbole given the fact that many members of gen Z are still in elementary school. But the authors support their statement with evidence drawn from six compelling, albeit opaquely named forces: “breaking generations, hyperconnectivity, slingshotting, shifting from affluence to influence, adopting the world as my classroom, and lifehacking.” These forces, described at rapid-fire speed in the video below, make the case—and set the stage—for gen Z as the only generation on which companies should focus their efforts.

Happily, this doesn’t mean that the rest of us are on the verge of becoming obsolete. Membership in gen Z is not merely a function of your birthdate—according to the authors, it is also a conscious choice. That means two things: One, if we adopt the right behaviors and beliefs, we can all be gen Zers (an idea that the legions of us boomers—who are approaching our discard-by dates—will surely love). And two, companies don’t need to wait around for gen Z to come of age.

Toward that end, I asked Koulopoulos and Keldsen for three things that leaders can do to begin developing a Gen Z workforce today.

"First, adopt reverse mentoring,” they said. “Reverse mentoring, which is used by less than 14 percent of companies, is just mentoring turned upside-down. Rather than having older, wiser employees show young employees how to navigate the organization, the young employees show older employees how to navigate the nuances of new technology, which can be surprisingly difficult to grasp. Companies, like Cisco, which has been doing this for years, have found that the benefits are significant and go in both directions, creating bridges across generational divides that otherwise end up undermining collaboration.

“Second,” they added, “be transparent to increase participation, trust, and innovation. One of the most dramatic generational differences in how employees view organizations is a radical rise in the demand for transparency. For gen Z, transparency is a predicate for trust, and trying to control, govern, or argue the merits of transparency is a sure fire way to alienate and frustrate its members. They believe that access to information ultimately creates greater value than hording it. Think of Elon Musk giving away Tesla’s patents and the open source and copyleft movements, and you start to get a sense for the level of transparency that gen Z expects.

“Third, provide meaning. This one sounds soft,” they explained, “but it may the most important lesson of all if you really want to engage Gen Z. In an always connected, always on world, employees will live in constant conflict if their work does not align with their values and purpose. Creating meaning is not just about being an organization that does good things. More importantly, it is about allowing employees to do things that are fulfilling and rewarding at a very deep level. This means that you have to provide Gen Z the ability to integrate lifestyle and personal passions with work. Luck Stone, one of the largest family-owned and operated producers of crushed stone, sand, and gravel in the U.S., is obsessed with helping employees ‘ignite their human potential’ through values-based leadership. And all they do is crush rock. So, what’s your excuse?”