For as long as there has been marketing, those who practice it have been on the hunt for the next big thing — loosely defined as that medium or platform so engaging that consumers are inexorably drawn to it. Among the contenders in 2016? Virtual reality. At March’s SXSW Interactive Festival, which devoted an entire track to virtual reality (VR) and its sibling, augmented reality (which combines the virtual and physical worlds), attendees could take part in a Google VR Happy Hour, “paint” a virtual McDonald’s Happy Meal box, or travel into space with NASA.

In April 2016, at Facebook’s annual F8 Developers Conference, founder and CEO Mark Zuckerberg closed his keynote address not only by pinning big hopes on VR — one of the key components of the social network’s 10-year plan — but by giving a US$100 Gear VR headset and a Samsung Galaxy smartphone to every one of the 2,600 attendees. Rather than being just the usual Silicon Valley swag, this was swag with a purpose. Facebook (which bought VR company Oculus Rift in 2014 for $2 billion) was giving the developer community, which includes plenty of people in marketing, technology that can create the kind of immersive branding experiences that will engage potential customers and perhaps coax them into real-world transactions. 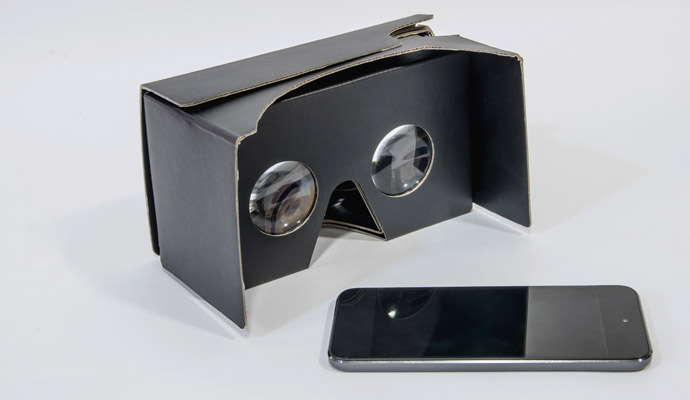 It’s way too early to say precisely how the promise of VR will be actualized across the entire advertising landscape — particularly when the hardware that produces these virtual experiences is expensive, unwieldy, and has the extra drawback of making its users look downright laughable, almost as though they had strapped a shoebox to their heads. With the exception of a VR player known as the Google Cardboard, they range in price from $100 to $800, and even those high prices are misleading. The reason Facebook gave developers the Samsung Galaxy, which can sell for around $700, is that it’s basically a component of the Gear VR. Users have to put the phone in a special holder at the front of their headset in order to experience virtual reality.

It’s too early to say how the promise of VR will be actualized across the advertising landscape.

But even the $15 Cardboard — a specialized cardboard box that also requires a smartphone to work — demonstrates why advertisers are lining up to create immersive virtual reality experiences. The New York Times distributed the device for free in partnership with Google to 1 million print subscribers in late 2015. In so doing, it opened an easily accessible window into what VR can be for both content companies and marketers.

Through the NYT VR channel, viewers can (virtually) stand alongside mourners in Paris after the terrorist attacks, attend a presidential campaign event in Iowa, or visit a refugee camp in South Sudan during a food drop. Content is added to the channel as it becomes available, and stays there. NYT VR also has paying advertisers; TAG Heuer, Mini, and General Electric have been among them. The “ads,” naturally, are short VR films, that appear as part of a menu of content (differentiated from editorial content). The fees advertisers are paying for the opportunity have not been disclosed. Unlike the editorial material, ad content is pulled from the channel when the flight (air time) paid for is over, according to a New York Times spokesperson.

The TAG Heuer experience has users appear to drive a race car and float through the gears of a well-engineered watch. Mini’s recent offering was a short film about a diamond heist that leverages the medium’s ability to stream video in 360 degrees — viewers have to turn almost entirely around in order to see a fight that is a major part of the film’s plot. At another point, viewers appear to be sitting in the back seat of a Mini Cooper during the getaway scene.

The breadth and depth of brands that are experimenting with the technology, either behind or in front of the camera, demonstrates how fervently advertisers want to be in on VR. In addition to the brands already mentioned, they include Mattel (which is recrafting the ViewMaster for the modern era), Apple, Microsoft, Nestlé, The North Face, Lufthansa, Hasbro, Disney, NBC, Coca-Cola, Nissan, and HBO — and the list goes on.

Toward the end of his F8 keynote, Zuckerberg posted a huge slide of the VR glasses of the future. Looking no different from regular glasses, their development may be the final signpost that, for content providers and marketers, VR has arrived. Still, even if such technological refinement is years off, it looks like the time to start experimenting with VR is now.

Catharine P. Taylor has covered digital media since 1994, writing for publications including Adweek and Advertising Age. She also wrote the weekly Social Media Insider column for MediaPost for seven years, and is a program director for the Conference Board, managing some of its marketing-focused events.