These days, zombies are everywhere. They’ve become so commonplace that the Centers for Disease Control and Prevention in the United States uses “zombie preparedness” as a way to educate people about being ready for an emergency. But what, aside from their infectious personalities, accounts for our current fascination with the walking dead? 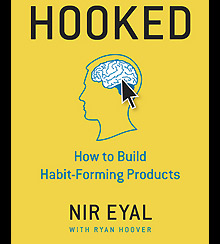 “Perhaps technology’s unstoppable progress—ever more pervasive and persuasive—has grabbed us in a fearful malaise at the thought of being involuntarily controlled,” suggests Nir Eyal, author of Hooked: How to Build Habit-Forming Products (with Ryan Hoover, Portfolio, 2014). But he is less interested in finding a cure for humanity’s tendency to zombieism than in explaining how to exploit it.

Eyal’s goal in Hooked is to show companies how to stimulate “unprompted user engagement, bringing users back repeatedly, without depending on costly advertising or aggressive messaging.” The idea is to transform services or products into unconscious habits à la Google and Twitter, Angry Birds and Candy Crush Saga, or lottery tickets and slot machines.

To that end, the high-tech entrepreneur, blogger, and lecturer at Stanford’s Graduate School of Business and D.School presents the “Hook Model,” which he constructed from “distilled research and real-world experience.” The model has four consecutive phases: trigger, action, variable reward, and investment.

A trigger activates a customer. You advertise your product, get somebody like me to review it, get friends to tell each other about it, or—in the case of an app icon—place it on a customer’s phone or computer screen. An effective trigger prompts customers to do something: For instance, Eyal points to a Coca-Cola vending machine, with its big color photo of an attractive young person who is reaching out to you, Coke in hand, and the easy-to-read question, “Thirsty?”

Once triggered, the customer acts in anticipation of a reward. If you want customers to act, Eyal says, make it easy and mindless for them —like Facebook does when you want to share something you’ve read with your pals. The author borrows Stanford professor B.J. Fogg’s six simplicity factors for guidelines on how to achieve this task.

If you want customers to act, Eyal says, make it easy and mindless for them.

Once you’ve got them, it’s time to reward them. And the key to reward, the next phase in the Hook Model, is variation. The same old rewards eventually bore us. So, mix it up using three categories of extrinsic and intrinsic rewards, says Eyal, borrowing from various motivational researchers: “1. Rewards of the tribe—the gratification of others; 2. rewards of the hunt—material goods, money, or information; 3. rewards of the self—mastery, completion, competency, or consistency.”

Finally, to turn use into unconscious habit, the customer must make an investment. “The more users invest time and effort into a product or service, the more they value it,” Eyal writes. “In fact, there is ample evidence to suggest that our labor leads to love.”

The Hook Model is a positive feedback loop: Induce me to do something, and when I do it, give me a reward—preferably something that intrigues me enough to sign up, pay up, or otherwise invest in doing it again. Repitan, por favor, as my high school Spanish instructor used to say. But before you go counting your money, there’s also one more not-so-small thing to consider: First, you have to create something so cool that I’ll want to run around the loop enough times to transform myself into a zombie.