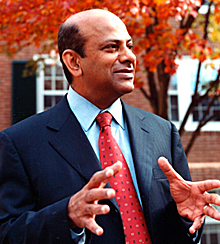 Innovation processes are almost always heavily front-loaded. They focus the lion’s share of attention on idea generation, but they usually finish with something less than a roar. Ask most executives what you should do after you’ve come up with a market-shaking idea, and they’re likely to say, “Just implement it.”

Vijay Govindarajan, the Earl C. Daum 1924 Professor of International Business and founding director of the Center for Global Leadership at the Tuck School of Business at Dartmouth, knows that implementing innovation is not quite so simple. For the past decade, he and Tuck School colleague Chris Trimble have been studying what happens after companies decide to bring that big idea to market.

They have reported the findings in their new book, The Other Side of Innovation: Solving the Execution Challenge (Harvard Business Review Press, 2010). In a recent discussion with strategy+business, Govindarajan discussed some of what the duo learned.

S+B: Why did you decide to focus your research on the execution side of innovation?
GOVINDARAJAN: Every time I meet with a group of executives, I take a poll. On a 10-point scale, one being poor, 10 being world-class, I ask them to rate themselves on how good their companies are at idea generation. They consistently rank their companies at five or six on the scale. Then I ask them to rate how good they are at executing ideas. On average, they rank their companies just one on execution. So, although I would not say that companies have mastered idea generation, relatively speaking, there are enough ideas out there. But if companies could just execute better, they could create a lot more growth.

S+B: Why do companies find it difficult to execute new ideas?
GOVINDARAJAN: In a sense, the problem is about people doing the right thing. Every organization has a core business, which we call its performance engine. Its main job is efficiency: By making every task repeatable and predictable, the core business obtains scale and makes a lot of money. Innovation is just the opposite. It is nonroutine and unpredictable. Therefore, there is an inherent and fundamental inconsistency between what companies do to pursue scale and what they need to do to execute on innovation. It is not that people are doing the wrong things and killing innovation. In fact, people are doing exactly what they should be doing to keep the performance engine running — and that is killing innovation.

S+B: What dimensions should be considered as executives think about how to approach innovation execution?
GOVINDARAJAN: Let’s take a concrete example. In 2000, Infosys [Technologies Ltd.], which had been writing software, went into the consulting business. Infosys Consulting could not be launched inside its core business. The performance engine was designed for software development, whereas consulting is about business transformation; programming and consulting require fundamentally different capabilities. And the customer for custom software is the head of IT, whereas the customer for consulting is the CEO. So a dedicated team was created, and the team designed a different culture and compensation package for the new business.

At the same time, the dedicated team drew on certain assets of the performance engine. One very important one was customer relationships, because, after all, the consultants wanted to work with the same Fortune 500 companies as the programmers. A second asset was the existing global delivery model, which enabled Infosys to dramatically lower costs and still offer high-quality service.

S+B: How do you ensure the performance engine’s participation in executing the innovation?
GOVINDARAJAN: You have to recognize that there are fundamental tensions between performance engines and innovation teams, and that any time you force them to work together, conflicts will arise. So you have to make the link, and then expect the conflict and manage it. The Infosys case study revealed three ways to do this.

Second, the dedicated team, like the performance engine, should report at a very high level. When Infosys Consulting was started, it was a tiny business. Yet it reported directly to the then CEO, Nandan Nilekani, who played a critical role in anticipating and managing the conflicts between the performance engine and the innovation team. Nilekani also created another board of directors for Infosys Consulting and made sure a few members served on both boards.

Third, it is important to create incentives, because ultimately people respond to rewards. One of the things Infosys did was to double count the revenues from the new consulting business. So if the software business provided a lead that generated sales for Infosys Consulting, it also got credit for the new revenue. This gave the performance engine an incentive to work with the innovation team.

S+B: Can you evaluate an innovation team in the same way you evaluate the performance engine?
GOVINDARAJAN: No, remember that innovation execution and day-to-day execution are fundamentally different. The performance engine is rightly held accountable for tight, financial-oriented metrics. But you cannot do that with the innovation team because it is conducting an experiment. That does not mean there is no accountability. We can hold people accountable for disciplined experiments.

Innovation projects start with nothing but a bunch of assumptions about the future. I call them weak signals. When you are faced with weak signals, you have two options. You can wait for the signals to become crystal clear before you commit resources, but by the time the signals are crystal clear, the game is usually over. The second approach is to amplify the weak signals yourself by testing the assumptions and converting them into knowledge. When you are converting assumptions into knowledge, the golden rule is spend a little, learn a lot. You evaluate the innovation team by how well and how quickly it amplifies weak signals.

S+B: Many companies are seeking to become innovation driven. Given what you’ve discovered in your research, is that an oxymoron?
GOVINDARAJAN: The idea that everybody comes to work every day to break the rules and create revolutions is nonsense. Somebody has got to worry about making money, and in fact, the bulk of the activity within a company should be focused on that.

But you still need to do experiments, because the future is now. The job of leaders is both to make money with the performance engine and to plant some seeds so that the company will make money 10 years from now. Therefore, you have to do enough experiments to yield one or two innovations that are worth scaling up. How many innovation initiatives do you really scale up? Only a few. As long as leaders who say that their companies are innovation driven have this nuanced understanding, I have no problem with it.

S+B: Why only a few initiatives?
GOVINDARAJAN: Because every time you start a new innovation initiative — which the performance engine cannot do because of its limits of reach — you are essentially creating a startup company. This is a major organizational undertaking. Nobody has the bandwidth to start hundreds of innovation initiatives. Each company will have to assess the dynamics of its industry and decide how many innovation initiatives it really needs. But this is so difficult that you should only do a few, and do them right. And doing them right takes real courage and conviction on the part of the CEO, who must be willing to live with organizational discomfort. If you are the head of Ford Motor Company and you want to create a small, inexpensive car targeted at the Indian market, you have to change the company’s fundamental mind-set. You have got to put a dedicated team in India and give them a lot of resources and power. This is a very discomforting thing when you are sitting in Detroit.