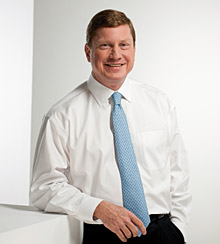 Southern Company is one of the largest utilities in the United States. It is also one of just a small number of electric power companies with a reputation for cutting-edge innovation and robust, proprietary R&D. Under chairman and CEO Thomas A. (Tom) Fanning, the company has been deeply committed to a wide range of R&D efforts designed to employ a diverse mix of fuel resources.

S+B: What drives Southern Company’s R&D strategy?
FANNING: Energy innovation represents an enormous advantage for Southern Company. Our efforts have simple goals: to preserve fuel flexibility and increase the value of energy to our customers. We are essentially fuel agnostic. We don’t know which fuels are or will be in vogue, and we don’t bet on them. We need to invest in “all the arrows in the quiver”—the full portfolio of energy resources. About five years ago, approximately 70 percent of our energy came from coal and approximately 11 percent from natural gas. Now it’s about 45 percent natural gas and about 36 percent coal. We don’t profit more off one fuel over another. We just want to use the cheapest fuel available for the benefit of our customers. Because Southern Company is so integrated, we can follow this strategy. The problem with separating generation from distribution and delivery is that it sends the wrong economic signals to the industry’s participants [by prioritizing profits over optimized costs], without serving the interests of customers. And if the interests of your customers conflict with the interests of your shareholders, you’ve got a major problem.

Besides cost and effectiveness, we also prioritize environmental and regulatory R&D. In fact, since the 1970s, we’ve had a proprietary R&D group working on developing real-world ways to manage environmental issues involving coal. Our initial R&D involved coal liquefaction—taking coal and turning it into an oil derivative, essentially.

S+B: So much has changed since the 1970s: the advent of renewables and now the new sources of shale oil and natural gas. How does that affect your innovation bets?
FANNING: One of our most interesting efforts today involves the gasification of coal—transforming low-grade coal into synthetic gas that can be used to generate electricity, with resulting carbon emissions comparable to [those of] a similarly sized natural gas plant. We’re building a clean coal plant in Kemper County, Miss., that uses the gasification technology we developed in a joint venture with KBR Inc. under the sponsorship of the U.S. Department of Energy, and we recently announced an alliance to market this 21st-century coal technology to power companies worldwide.

In another project, a joint venture with the Japanese engineering firm Chiyoda, we’ve developed scrubbers for removing sulfur dioxide from the emissions from our coal-fired plants. And we created our own technology for selective catalytic reduction—a chemical process used to remove nitrates from coal-fired boiler emissions. We have already spent [US]$8 billion on implementing these new technologies, and plan to invest even more in the coming years.

Such efforts have given us prowess and proficiency. We’ve been able to deploy these environmental control technologies 10 to 20 percent cheaper than the competition, depending on the plant and the technology involved. We can also remove up to 98 percent of certain emissions, significantly more than the average.

S+B: How centralized are Southern’s innovation practices?
FANNING: They are very centralized, but we try to maintain what might be called a “push–pull” system. The “push” side is headed by Chris Hobson, the senior vice president of research and environmental affairs and our chief environmental officer. Chris is involved with our portfolio of energy solutions for customers, whether that’s generation or transmission. He convenes his own meetings with people in the operating companies, which involves both compliance-related and market-related issues.

Another entity on the push side is our R&D group, headquartered in Birmingham, Ala. We also have a large facility in Wilsonville, Ala., that’s dedicated to our gasification and carbon capture technologies. We’re the only power company in the U.S. conducting carbon capture research in this manner, on both a post-combustion and pre-combustion basis. We leverage the full range of our technology research, assessment, and deployment projects all around the system. Our scientists come to us saying, “Here’s something I’ve got. Where else in the company can we use it?”

The “pull” side involves regular meetings between our innovation people and the marketing and power generation planning teams. This allows the innovation team to discuss the company’s operational challenges and to identify opportunities.

S+B: What about the role of external partners?
FANNING: Typically, we work with other companies on one-off or two-off projects, to put big money into big ideas. Examples of this include our scrubber technology work with Chiyoda, the development of our new coal gasification plant in Mississippi, and the CO2 filter research we’ve done with Mitsubishi. The goal is to share the significant fixed costs of some of these projects.

Like many other companies, we partner with and support research at a number of universities, working directly with the schools on technological issues. At our carbon capture research center, for instance, we divert some of the post-combustion gas streams from an operating coal plant into a series of bays in the research shop. Then we invite universities with strong research proposals to plug into the gas streams and apply their technology solutions to capturing the carbon in the streams. We pick out the best ideas, and we get to use some of what they learn during their experiments.

We also hold regular customer forums where we show people our new ideas and gather feedback. Much of this work involves our IT organization, which has become an integral part of how we deliver energy to customers.

S+B: How do smart grids and smart metering factor into your delivery scheme?
FANNING: Southern Company had about 4.4 million operational smart meters by the end of 2012, which is the second-largest smart meter deployment in the United States. Those smart meters are already reducing the number of vehicles on the road. In fact, Southern Company has avoided approximately 40 million miles of driving since the program began. It’s good for our bottom line, for the environment, and for customers.

There have also been some remarkable unplanned consequences. When devastating tornadoes went through Alabama in April 2011, we could tell immediately from our electronic map which neighborhoods were out of power, because we could see which smart meters were still working. That enabled us to deploy our restoration crews more effectively. The use of smart meters contributed significantly to the company’s fast response and successful restoration efforts.

In the longer term, smart meters may be the gateway to the so-called smart home. But we’re taking a prudent, measured approach. We’re not going to act hastily, because of cybersecurity concerns. It is better to move slowly and deliberately, and get it right. Given how important our service is to our customers, we will not expose their personal information—and the Southeast electric network—to threats. This is an important issue, and we will not take unnecessary chances simply in a rush to be first.

S+B: Where do your best new ideas come from?
FANNING: We look across conventional boundaries. For example, many people know that one of the big problems with wind generation is that it’s an intermittent resource. We’re developing the next generation of compressed air energy storage, or CAES. This technology uses power generated by the wind that blows during the night to compress air and inject it into the ground. The air is then extracted under exceedingly high pressures during peak periods of the day, using turbines to generate electricity.

CAES technology has been around for a while, but we are improving its efficiency by exploring more advanced cycles that will help reduce operating costs and make CAES an economically viable option for bulk energy storage. This advanced application of CAES came from the joint efforts of our carbon sequestration group and our renewables group. When we put these two teams together, they said, “Let’s not just think about sequestering CO2 underground. Let’s think about how to use wind energy and compressed air underground.”

S+B: Do you kill many ideas?
FANNING: Oh, sure. In fact, I would argue that your greatest indicator of success is how many ideas you kill. It proves that you’re developing ideas and pushing the envelope. And it proves that you have the discipline not to pursue just any idea—and sometimes that’s the hardest part of all, especially once you’ve started down the road.

Sometimes we’ll say, “That just isn’t going to work now, but let’s keep experimenting with it.” The original coal liquefaction idea eventually morphed into gasification from the ground up. Then we blended that with carbon capture technology, and now we’re on the way to bringing the concept to reality in Mississippi. It took some time, but ultimately it emerged into something really valuable.

Right now, we’re building a nuclear power plant and a 21st-century coal plant, converting other plants to gas, adding environmental equipment, and developing sources of renewable energy. That’s a total commitment of about $20 billion. A little bit of R&D goes a long way if it can raise the efficiency of these assets or reduce the amount of capital investment needed. Even our failures have more than paid for themselves in terms of cheaper energy, and that’s what matters most to our customers.