The Glass Closet: Why Coming Out Is Good Business 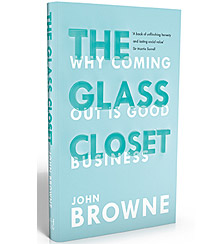 In The Glass Closet, former BP CEO John Browne reflects deeply on the toll that concealing his sexuality took on his life and career. His painfully honest and compelling account puts other CEO memoirs—including his own dutiful but dry first book, Beyond Business: An Inspirational Memoir from a Visionary Leader (Orion, 2010)—to shame.

Compare, for example, Browne’s descriptions of May 1, 2007, the day that he resigned from BP after a U.K. court gave the Daily Mail permission to publish allegations of impropriety by a former boyfriend.

In Beyond Business, Browne recounts his final departure from BP’s London headquarters through the press scrum and into his car, with the sole expression of emotion the epitome of British understatement: “It was intrusive and unpleasant.”

Here’s the same moment in The Glass Closet:

It felt as though all the air had been sucked out of the vehicle.

Driving away from the corporation that I helped to build felt like dying. For decades, I dissembled and fenced off a large portion of my life to prevent all of this from happening. I had ducked and weaved and been evasive for as long as I could. But on that day, almost inevitably, my two worlds collided. In the fallout, I lost the job that had structured my entire life.

After all those years of worry and dread, I could not help but think that my fears were finally justified. At that moment, I was convinced that I had been right all along.

That said, Browne, whose outspoken leadership on climate change and human rights inspired me to join BP, where I worked for nine years, won me over with his personal story but not his central argument. His book says that lesbian, gay, bisexual, and transgender (LGBT) employees should come out openly at work.

The problem is that the stories he tells of damage done to the careers of people who have come out are all too persuasive. Allan Gilmour lost the contest for the top job at Ford after 34 years with the company. Some suggested that his sexuality played a role in his being passed over. Vandy Beth Glenn was immediately fired from the Georgia General Assembly after sharing her intentions to transition from male to female.

I was thoroughly convinced by Browne’s discussion of, as he put it, “the consequences of being inauthentic.” Browne weaves stories from other LGBT executives into his own to show how closeted staff have to keep their colleagues and business partners at a distance, making it impossible to build trust and explore the full potential of their professional selves.

But then come the horror stories, which illustrate a reality that Browne acknowledges: “I cannot say with certainty that someone’s career will not be unaffected if they disclose their sexual orientation. I wish I could tell gay people that they will be fine, but the evidence collected here suggests that there remain some risks.”

Browne recounts one young woman telling him that his traumatic resignation from BP convinced her to remain in the closet at her oil and gas company, to which he responds: “This is the wrong lesson to draw from my experiences. The double life I led should not be seen as a workable blueprint for a business career. It should be viewed as a cautionary tale.” But who is Browne to say that the conclusion anyone else derives for his or her own life is the wrong one?

“The double life I led should not be seen as a workable blueprint for a business career.”

Browne tries to counter the negative stories with positive evidence. But although there are anecdotes about individuals who came out at work and went on to professional success, most of “The Benefits of Coming Out,” as one chapter is titled, accrue to companies for fostering an LGBT-friendly environment.

The business case is certainly compelling. Browne suggests that straight potential employees see a company’s treatment of LGBT employees as a signal of the company’s culture more broadly. And there’s the size of the LGBT market, which Browne asserts that companies can only access by walking the talk internally.

He presents practical recommendations: Companies should establish policies benefiting same-sex partners and specifically prohibiting discrimination on the basis of sexual orientation; activate LGBT resource groups and allies; and use tools like anonymous employee surveys to track their progress. It’s hard to imagine any company (Hobby Lobbys of the world aside) arguing that such measures aren’t a good idea. But Browne’s point is that too many companies fold LGBT protections into general nondiscrimination policies, which isn’t good enough to specifically address homophobia and make LGBT employees feel protected. He cites one U.S. survey in which 80 percent of LGBT respondents said that when applying for a job it was "very important" or "fairly important" that the potential employer have a LGBT equality and diversity policy in place.

Had Browne come out earlier in his career, would he still have ascended to BP’s top spot? Browne only says, and repeatedly, that one can never know.

But to me, the most interesting hypothetical questions at the intersection of Browne’s career and his sexuality weren’t even posed in the book: Had Browne been out as BP’s CEO, could he have changed some of the laws and attitudes that he says kept him in the closet for so long? And, what responsibilities and opportunities do business leaders like him have to influence not just their own companies but the broader context?

“My fear of being discovered arose from my belief that I could not do business as an openly gay person in a country that criminalised homosexuality,” he writes, specifically citing Russia as one such country where BP had business interests. But he also writes of Vladimir Putin: “I have no sense of his attitudes towards sexuality, but I know that Putin is a pragmatist. To me, Russia’s anti-gay legislation is more about political posturing than it is about a sincere disgust for gay people.”

In Browne’s first book, he recounts his final meeting with Putin in March 2007, at Putin’s dacha outside of Moscow:

He was very relaxed in that environment, with his dog, and we talked with less formality than usual. Perhaps the dog helped; it seemed to like me. Putin commented on BP’s consistency, that we had delivered on our promises and that I had always had the same clear agenda with him.

By then the private court hearings about Browne’s personal life that would soon become public were well under way. Russian intelligence obviously kept a file on him—Browne recalls one official telling him they knew he would be BP’s next CEO—and it is hard to imagine that Putin would not have known about Browne’s situation.

Trusting Browne’s assessment of Putin’s pragmatism and respect for BP, it seems implausible that Putin would have dropped Browne and BP as a partner of choice had Browne come out publicly.

Fast-forward to the Sochi Winter Olympics: The Human Rights Campaign called on Olympic sponsors to condemn Russia’s anti-LGBT laws, and AT&T and others responded, but Moscow kept its laws in place. However, I can’t help but wonder whether the support of a CEO who had earned Putin’s respect, and led a company with massive long-term investments in Russia—not just an Olympic sponsor whose brand might be under threat for the few weeks of the Games—might have changed that outcome.

As a BP employee, I saw first-hand how Browne used his platform to effect positive change with regard to climate change and human rights: not just by showing what was possible in his company, but also by shifting the public debate and helping create initiatives that brought together business, governments, and civil society and moved the global debate forward.

In part because of the words and actions of business leaders like Browne, the late Ray Anderson of Interface, and Jeffrey Hollender who cofounded Seventh Generation, the environmental movement has taken hold in mainstream business, as companies have realized that they can achieve greater efficiencies, cost savings, and employee and public goodwill by minimizing waste and maximizing green. The LGBT movement may be on the cusp of the same.

Of course, Browne also embodied the challenges of aligning aspirations with reality in business. The alternative energy business that Browne launched to great fanfare in 2005 did not survive much past his tenure, suggesting that its value was not as obvious to others. A number of terrible accidents during the final years of Browne’s tenure as CEO may have foreshadowed the 2010 Deepwater Horizon disaster, and certainly undermined Browne’s and BP’s green credentials.

CEO leadership on any issue is essential, but it is insufficient on its own. As Browne rightly outlines in The Glass Closet, embedding policies and processes is critical.

As much as it pains me to say it, I finished The Glass Closet feeling like its subtitle, “Why Coming Out Is Good Business,” is for now more aspiration than reality. Coming out for the individual is still fraught with risk, even though it is good business for companies to foster an environment in which those individuals can do so without fear of harassment or discrimination. In the end, however, if we keep saying that coming out is good business and good for the people in those businesses—and most important, if business leaders like Browne say it to world leaders like Putin—perhaps it will someday become true.