Mindful Work: How Meditation Is Changing Business
from the Inside Out 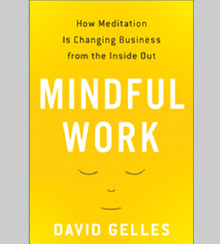 Corporate America and meditation: Until quite recently, those words in the same sentence might have made for a satiric article in the Onion. But as New York Times journalist David Gelles charts in his unusual new book, these strange bedfellows are no longer so strange. Corporate mindfulness seminars are not yet as prevalent as workplace day care and cafeterias. But they soon may be.

Never before have American corporations been more central in shaping society. Even as the statistical entity we call “the economy” has confronted the limits of growth, companies — especially large multinationals and tech enterprises — have been growing rapidly. At the same time that companies have been carving out a larger role in public life, Americans have been turning ever more frequently to a smorgasbord of self-help philosophies ranging from ancient Buddhist practices and yoga to the most esoteric aspects of the New Age, as well as assorted forms of bodywork and nontraditional medicine.

It’s hardly surprising, then, that more workers and more organizations are embracing what Gelles calls “mindful work,” namely, the adaptation of centuries-old meditation techniques and breathwork that have been shown to reduce stress, boost health, strengthen immune systems, improve concentration, encourage cooperation, and yes, increase productivity. Although hardly mainstream, meditation in the workplace is no longer fringe. And it is that evolution that Gelles provocatively charts and celebrates.

Although hardly mainstream, meditation in the workplace is no longer fringe.

Gelles writes not just as a dispassionate reporter but also as a practitioner. And he scatters his narrative with personal stories of how he first came to discover meditation on a trip to India in college and then rediscovered the practice of mindfulness some years later. Mindfulness is a subset of meditation, defined as “paying attention in a particular way: on purpose, in the present moment, and nonjudgmentally.” It involves a modest amount of self-discipline and regular practice of sitting quietly, attending to one’s breathing, and trying to calm the mind. It also entails tapping into compassion for the struggles of others, especially coworkers and colleagues who themselves may lack compassion.

Gelles traces the first few mindfulness experiments by large companies in the 1990s, including such unlikely candidates as the agro-giant Monsanto, whose early experiments ended with the ouster of the CEO who initiated the program. He examines how a senior legal executive at General Mills came to lead that company’s lunchtime meditation workshops before she decamped to her own mindfulness consulting business. As he explores the evolution of corporate meditation experiments, he also describes how his own regular meditation has helped him handle challenging stories and abrasive editors.

One of Gelles’s more compelling tales involves Mark Bertolini, the chief executive officer of Aetna, who somehow survived a horrific skiing accident in 2004, but at the cost of chronic, debilitating pain. Pain medication was useless. So Bertolini turned to yoga and then meditation, and found a tenable path that allowed him to live with the pain without being consumed by it. He then slowly introduced mindfulness and meditation seminars at work — first to his senior staff and then to more layers of the company. The result: Healthcare costs for Aetna employees went down, along with reported levels of stress. In turn, time management and productivity increased. Today, the company calculates that it has added US$3,000 per year per employee in productivity gains thanks to mindfulness efforts.

Although Gelles acknowledges the understandable desire of CEOs and management to justify the plunge into seemingly esoteric practices on the basis of increasing worker productivity, he also rightly challenges whether that is really the point. After all, there is something a bit distasteful about urging workers to breathe in and breathe out with thoughts of goodwill and compassion for all simply in order to boost returns (imagine companies starting to calculate ROM — return on mindfulness).

As meditation becomes harnessed to corporate goals and mindfulness becomes part of the management lexicon, Gelles argues that something may be lost. What he and others have dubbed “McMindfulness” offers a facsimile of calm and compassion as just another consumer product and service to be sold and bought. The result, says Gelles, “is a commercialized, sanitized, and whitewashed version of the practice.” The fault, however, lies with the application of the tool and with inevitable human foibles, and not with the practice of mindfulness itself. Like any other tool, mindfulness practice can be used and it can also be misused; it can be a source of compassion, and it can help soldiers and snipers under fire stay calm and fight more effectively.

Gelles does not always succeed in blending his personal experiences with his case studies. Overcoming hurdles in one’s career as a business reporter may resonate among educated professionals. And working in the media can certainly be stressful. But a gulf still separates the author from both the CEO of a major multinational, on one end of the spectrum, and the millions of line workers, on the other. Acknowledging that today’s mindfulness speaks most effectively to one specific demographic would not undermine the powerful argument that all of us should use integrating tools that promote focus and compassion.

Finally, Gelles only begins to touch on the powerful convergence of Silicon Valley and new tech companies with alternative practices such as mindfulness. Although many of the teachers and ideas touched on would be familiar to anyone who has ever watched Oprah, in the business world, the California culture has been especially welcoming to the fusion of New Age teachings and corporate management. As the tools of technology continue to permeate and shape our world, it will be fascinating to see whether that culture spreads even farther. In the meantime, it can only be for the good that more companies are embracing the tenets of mindfulness, seeking to temper the calculus of profit with the powerful need we all have to feel more connected to those around us.