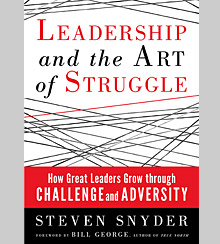 Often, we mistakenly attribute business success to the innate abilities of those who achieve it. We assume that the skills of a Henry Ford, a Steve Jobs, or a Jeff Bezos are somehow hardwired into their DNA. But neuroscience research suggests that such an assumption can become a major obstacle to high performance.

As Steven Snyder explains in the excerpt below, the real secret of success resides in people’s mind-set. He shows how a “fixed” mind-set that ascribes success to innate qualities is less resilient and adaptable than a “growth” mind-set that connects achievement to continuous learning and persistence.

Thus, neuroscience offers a valuable strategy for leaders who are seeking to develop the talent base of their organization: Attribute people’s success to what they did to achieve it. And when they fall short of their goals, use it as an opportunity to encourage the improvement of existing capabilities and the development of new ones. The simple distinction between labeling a person as successful or unsuccessful and labeling what that person did as successful or unsuccessful can make all the difference as you strive to meet tomorrow’s challenges.

An excerpt from chapter 3 of Leadership and the Art of Struggle: How Great Leaders Grow through Challenge and Adversity


Consider two leaders who set out on a complex and difficult endeavor. Let’s call them FM and GM, for reasons that will become clear in a minute. FM and GM are equally matched with respect to their abilities and motivation, yet these two leaders approach a task very differently. FM, a cyclone of unfocused energy, does not learn from feedback opportunities and appears frenetic, chaotic, and haphazard overall. GM is more organized and systematic and carefully considers all feedback. FM’s counterproductive whirlwind is no match for GM’s logical and calibrated approach, and GM easily outperforms FM by a significant margin. What can account for such radical differences between two individuals so clearly matched?

Psychologist Carol Dweck argues that conditioning, beginning at a very young age, implicitly imposes a fixed mind-set. Virtually every adult has at some point told a youngster who did something well, “You are so smart!” According to Dweck, such messages build a belief that it is our inherent smartness that leads to good performance, not the effort that is exerted.

Through the associative processes of the automatic mind, these beliefs become forged with our identity. When things go well, we think it’s because of how smart we are. When things don’t turn out as we had hoped, we begin to doubt our ability. In other words, our mental model implicitly attributes performance—good or bad—to innate capabilities. We tend to think of capabilities such as problem solving, communication skills, and leadership as fixed and stable over time, hardwired by our genes. So, what is so wrong with that?

Quite a bit, actually. This mental model is a proven recipe for suboptimal performance over the long term. It becomes especially problematic when individuals with a fixed mind-set suffer a setback or make a mistake. They automatically associate their disappointing performance with an immutable deficit in abilities. This can diminish their confidence and spark an escalating spiral of negative emotion as they compare themselves unfavorably with others. More time spent in negative ideation means less time thinking about creative ways to improve performance....

Surprisingly, research shows that a fixed mind-set can also be detrimental when things are going well. When people attribute their good performance to their innate ability, they tell themselves that effort and learning don’t make much of a difference. Consequently, they select safer, less challenging routes where they can be assured of success, a pattern that further stagnates their growth.

A leader with a growth mind-set is consciously aware that ability is not innate and unchangeable but instead a malleable quality that can continuously be augmented through practice and persistence. In a growth mind-set, you pay conscious attention to cultivating abilities through continuous learning. You seek out new learning opportunities by pursuing challenging assignments instead of taking safer and easier routes....

Frank Gaudette, the chief financial officer (CFO) at Microsoft when I was there...had a growth mind-set. Frank had a favorite expression: “I reserve the right to wake up smarter every day.” Unfortunately, Frank lost an untimely battle with cancer in the mid-1990s. Still his witty and humble expression serves as an eloquent reminder that every human being’s abilities can change: you can get smarter; you can get better. Frank’s words still echo in my mind and, I am sure, in the minds of everyone else who was privileged to know him.

Another fascinating finding of the study is that participants who carried a fixed mental model—that is, those who believed that their performance on the task was a reflection of their innate ability—actually had higher levels of activity than participants in the growth mind-set group. They were, however, more likely to spend time on nonproductive strategies rather than search for the effective strategies that would improve their performance.

Given that this finding is crucial to a deeper understanding of the differences between the two mind-sets, it may be helpful to take a closer look at the different strategies that participants used to complete the task. Those in the growth mind-set group productively used the feedback they received and systematically altered each of the variables in the task to understand and isolate its effect on the outcome. Tapping into their reflective mind in this way allowed them to deploy wiser strategies in the later stages as their knowledge of the task improved.

As noted, those in the fixed mind-set group actually exerted more energy. They altered even more variables in the simulation task, but did so in an undisciplined and unproductive manner. In essence their busyness resembled futile thrashing more than effective problem solving. Instead of incorporating negative feedback to improve performance, the energy in the fixed mind-set group turned inward, consumed by an escalating cycle of self-doubt that interfered with both learning and performance.