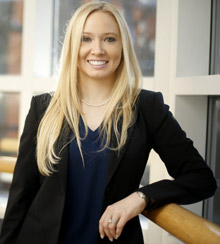 Scandals make good headlines. Whether it’s a high-profile political figure, a big-name CEO, or even someone less well known, when we see the mighty fall we can’t help but watch and wonder. We’re reminded, time and again, that power corrupts. But Jessica Kennedy, an assistant professor at Vanderbilt University’s Owen Graduate School of Management, suggests we rethink that assumption.

Over the last five years, in numerous studies, Kennedy has researched the origin of unethical behavior, and why it takes hold. She has found that the whole story is more complex. It’s not always about power corrupting. Rather, power causes people to identify so strongly with their group that they lose sight of whether that group’s actions cross an ethical line. This identification can lead them to support misconduct, rather than stopping its spread.

Kennedy, a graduate of the Wharton School at the University of Pennsylvania, spent several years working as an investment banker before deciding to pursue a Ph.D. from the University of California at Berkeley’s Haas School of Business. In other studies, she has explored the interplay of gender and ethics, identifying differences in the ways men and women respond when they are pressured to sacrifice values for profits. Kennedy spoke recently with strategy+business about her body of research — all of which is rooted in her search for ways that businesspeople can achieve their goals while acting ethically.

S+B: When we hear about ethical misconduct, the common assumption is that it must stem from the person in charge.
KENNEDY: Previous research has often traced ethical misconduct to high-ranking people’s orders. It shows that power leads to bad behavior, in essence. Other studies have shown that the behavior of high-ranking people sets the tone in their groups — that it trickles down.

But I don’t think that presents a complete picture of how unethical practices emerge. In fact, such practices often emerge from groups. For example, prior research has found that people making decisions as a group are more willing to lie than when they are making decisions as individuals. What I found in multiple studies was that high-ranking people are more inclined than low-ranking people to accept what their group recommends to them, even when it represents a breach of ethics. That is, higher-ranking people are less likely to engage in principled dissent and actively oppose such recommendations than are lower-ranking individuals.

S+B: Why are people in positions of power more likely to go along with the crowd?
KENNEDY: The higher a person’s rank in a group, the more they identify with that group. If you show high-ranking people statements such as “I identify with this group” or “Being part of this group [the group in which they hold high rank] is an important part of who I am” or “I really value this group membership,” they agree with these statements more strongly than low-ranking people. Power creates identification with the group that accorded that power. And when people identify strongly with a group, they’re more inclined to accept that group’s norms and practices. That makes sense, because you’re motivated when you identify with something to view it positively. The idea is that people merge their sense of self with their sense of the group.

“The higher a person’s rank in a group, the more they identify with that group.”

Of course, identification isn’t the only factor at play. One of the things that I’d like to study in the future is how a sense of responsibility for the group’s success plays in. I think it’s possible that high-ranking people feel a sense of loyalty and duty to help enable positive outcomes for groups that have given them these valuable positions, and so they might be more likely to go along with practices that enable success even if those practices are unethical. But in the studies that I have conducted to date, identification clearly emerged as a powerful driving force.

S+B: How did you test your hypothesis?
KENNEDY: In one study, I analyzed data that had been collected from people across the hierarchy within about 20 organizations. I looked at how their level in the organization related to whether they had reported unethical practices to someone — be it a coworker, an immediate supervisor, a higher-level supervisor, a person in an ombudsman-type role, a person external to the organization, or others — and found that higher-ranking people were less likely to have reported unethical practices within the last 12 months.

These results aligned with my hypothesis, but because there were alternative explanations that I couldn’t rule out due to the correlational nature of the data, I turned to the lab and manipulated people’s rank. In groups, people had to decide whether to lie to members of another group in order to earn more money for themselves. I varied whether the majority of the people in the group wanted to lie or tell the truth. The “high-ranking” people were much more likely than the “low-ranking” people to support the group’s decision in both cases.

These are just two examples — I’ve found similar results in other studies over the years. And I should note that I have also looked at “positive affect,” or happy feelings. I wanted to see if people are just happier when they hold high rank, and if that might explain why they go along with the group. When we’re in a positive mood, perhaps we’re just less likely to be critical of things in general. But when I measured positive affect alongside other variables using statistical analyses, it did not explain the results as powerfully as identification did.

S+B: Are people with high rank blinding themselves to wrongdoing, or do they know something is wrong but choose to ignore it?
KENNEDY: I’ve found that high-ranking people actually see what the group is recommending as more ethical than lower-ranking people do. Recently, I analyzed a decision from a business school case study about whether to dramatically raise the price of a medical product following a natural disaster. People were told that they were either a high-ranking or low-ranking individual in the group, and were then told that their group’s majority recommendation was to raise the price in light of increased demand following the disaster. High-ranking people were more likely than low-ranking people to classify that decision as “reasonably ethical.”

S+B: You’ve also studied ethics in relation to gender.
KENNEDY: I led a study [with Laura Kray of the Haas School of Business] in which people were given examples of decisions that sacrificed ethical values such as loyalty and truth for profits and social status (for example, respect and prestige). We tried to make them pretty realistic scenarios, the types of things that businesspeople encounter, and asked them to report their levels of moral outrage and moral reservations. Women reported more moral outrage and greater reservations about sacrificing ethical values than men did.

I then looked at some of the practical consequences of this finding. Are women more likely to lose interest in careers that they would otherwise enjoy if they think that these careers require ethical values to be compromised? And, in fact, I found evidence for that. If you show people job descriptions of prestigious careers — the types of jobs that new MBAs typically pursue — and you compare men’s and women’s interest in the jobs, you don’t see any difference. But if you tell people that the job requires them to compromise ethical values, men’s interest in the position doesn’t change, whereas women’s declines significantly.

This is significant, because even small differences in the degree to which men and women continue in a particular career can lead to big gender differences in authority over time. Over the years, having a few women select out because of ethical conflicts means there are fewer women at the top to serve as mentors to junior women, which may then result in even fewer women making it into firm leadership roles.

I’m studying these findings now. My initial thought is that there must be something about having to publicly report unethical behavior that is discouraging women from acting on their beliefs. Maybe women fear backlash. Principled dissent is a highly assertive behavior, and engaging in it may violate gender stereotypes. To the extent women intuitively know this, they may feel unable to speak up.

S+B: What are some of the key takeaways from your body of work for company leaders?
KENNEDY: My data suggests that if you want to avoid ethical misconduct at your company, you might want some lower-ranking people or some people who don’t identify highly with your organization as part of the groups that are making important decisions. Ideally, you’d have a culture that encourages lower-ranking people to speak up when they perceive something to be unethical.

We should also think about accountability. When high-ranking people know that they’re being held accountable for upholding ethical standards, does that lead to more effortful thought surrounding the evaluation of ethical practices? This is an open, empirical question. We know from previous research that having power increases an individual’s focus on goal-directed behavior. If you are clear from the outset that ethical behavior is one of the goals, I think it’s possible that you could reverse the effect of high rank. The problem is that ethical standards are often seen as obstacles to goals, rather than as an integral part of excellent performance.

“Ethical standards are often seen as obstacles, rather than as integral to excellent performance.”

Another question that emerges is, Will organizations benefit in terms of how ethical their practices are if they have women at the top? I’ve seen some data on executive women who serve on boards of directors that shows they care more about others’ welfare than about power. That suggests there is something unique about women’s values that will persist regardless of their level of rank in the organization. But as my research has shown, these value differences aren’t always translating into principled dissent. It’s a great avenue for future research — to identify the impediments holding them back, so that women’s emphasis on ethical values can benefit their organizations.