Digital Gold: Bitcoin and the Inside Story of the Misfits and Millionaires Trying to Reinvent Money 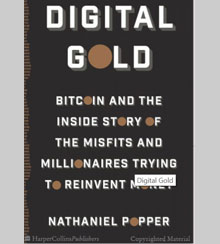 History yields few details about the official establishment of gold as money. It was likely a disjointed and lengthy process that predated official record keeping, and was probably driven by custom, expedience, and the greedy whims of kings. Several centuries later, paper money came into use in a fitful and grudging way. After all, bills amounted to mere IOUs from a bank or government that might be trustworthy, or not. There was no Magna Carta for cash.

Bitcoin, which aims to be a successor to metal and paper money, is different.

The digital currency system was introduced to the world at a discrete moment, motivated by clearly stated principles. And all the relevant rules for its creation and use were described in a founding document published in 2008. The so-called cryptocurrency was also nurtured, debated, and promoted by individuals in the age of email and Internet message boards.

Bitcoin’s undisputed paternity and the enduring electronic record of its birth has provided the voluminous material for Nathaniel Popper’s engaging and illuminating new book, Digital Gold: Bitcoin and the Inside Story of the Misfits and Millionaires Trying to Reinvent Money, which is likely to stand as the definitive narrative of bitcoin’s early development.

Popper, a New York Times reporter who covers the nexus of finance and technology, introduces the reader to a motley assortment of techno-utopians, online-privacy activists, libertarians, online drug traffickers, hard-money zealots, and quick-buck artists who seized on bitcoin as either a disruptive innovation, a long-sought key to individual freedom, or the next hot asset class to exploit for profit. Popper deftly sketches these characters and moves the action along with short chapters focused on their fraught interactions, strokes of insight, and technological crises. Along the way, he explains clearly and with helpful repetition exactly how bitcoins work and why they have found at least tenuous purchase in so many distinct communities since emerging in late 2008.

One character who remains in the shadows is Satoshi Nakamoto, the name used by the author of the original bitcoin email, a combination of manifesto and engineering blueprint that was sent to an obscure distribution list of coders. Nakamoto slipped from the scene entirely in 2011, and all attempts at identifying him have so far proved futile. Newsweek’s splashy 2014 effort to pin the founder’s identity on an eponymous 64-year-old Japanese immigrant physicist in California proved unconvincing.

Regardless of his true identity, Nakamoto’s original plan called for a purely electronic currency created and supported by whatever computers were linked to the platform. As such, bitcoin is a kind of money untethered to financial or government institutions. New bitcoins are created, or “mined,” when computers are programmed to compete in solving complicated number problems. The new coins are “released” in predetermined increments, and the total number of bitcoins that will ever exist is to be capped at 21 million in about the year 2040.

Each bitcoin is worth what the free market decides. Plenty of financial professionals scoff that they’re worthless, but others suggest their decreed scarcity will cause their value to soar over time. Indeed, they were worth almost nothing at first. But in 2013 the price of a single bitcoin surged rapidly, from US$87 in July to above $1,200 in November, after the Chinese e-commerce giant Baidu agreed to accept bitcoin as payment and traders hitched themselves to the momentum.

Digital Gold draws its title from one conception of bitcoin promoted by its adherents, including Nakamoto. Bitcoin was designed to be like real gold in several respects: It is finite in supply, difficult to mine, infinitely divisible, and portable; it can be owned and traded anonymously; and it is not a liability of any government or bank. Modern thinkers often regard gold as a primitive form of exchange — a “barbarous relic,” as economist John Maynard Keynes famously dubbed it. And yet bitcoin acts like a thoroughly modern currency in being fully electronic and quickly fungible across other established currencies. All currency systems are belief systems; for instance, the value of the U.S. dollar ultimately rests on the faith in the credit of the United States. And the bitcoin system has attracted a wide range of believers. Privacy absolutists see it as money that can be held securely and anonymously (or, strictly speaking, under a coded identity). Some finance types see it as little more than a low-cost means of wiring money around the world, a cheaper PayPal. The rogues behind the black-market site Silk Road — whose rise and fall Popper details — adopted bitcoin as the only available means of taking payment for the psychedelic mushrooms and other illicit goods it offered. Antistate, anticorporate libertarians who have long pined for money that grants true independence from governments and banks see bitcoin as a liberating force. And some technology investors and futurists talk of bitcoin as an essential new “computing resource,” a driver of system stability and efficiency, in a way that can make the layman’s head hurt.

All currency systems are belief systems, and bitcoin has attracted a wide range of believers.

Popper’s account occasionally bogs down in intramural squabbles and tangential characters. Describing the scene at an early gathering of the bitcoin faithful, Popper writes: “The conference was a rather apt representation of bitcoin itself, with its odd mixture of chaos, community, snake oil, innovation, high-mindedness, and enthusiasm.” But on the whole, he manages to convey the advent of bitcoin as a development that was somehow both unlikely and inevitable.

Why inevitable? Many of the factions that took to bitcoin had been searching for a digital cash solution for a long time. And Nakamoto’s email entered a world shaken and baffled by the global financial crisis of 2008, which was then reaching its depths. When the U.S. Federal Reserve began buying trillions of dollars’ worth of bonds to support and energize the financial system and economy, many people asked, for the first time, where the Fed got the money. When it turned out the answer was that the central bank prints money and injects it into the economy with a few keystrokes, some of those same people began to see the merit of a rules-based system for making and exchanging a new kind of digital money. The same energy that gave force to the Occupy Wall Street movement sent some people flocking to bitcoin as a path to a purer economic existence.

When this window of opportunity opened, players such as top venture capitalists, Goldman Sachs, and the New York Stock Exchange lent bitcoin some legitimacy with investments or alliances with related businesses. The financial establishment, it turns out, loves to jump on disruptive new trends. The Winklevoss twins, immortalized in the film The Social Network, have been enthusiastic evangelists for bitcoin.

Less than a decade after bitcoin’s arrival, however, there are signs that the bubble may have burst. The crisis has passed, Western governments remain solvent, the dollar is ascendant, and Silicon Valley is busy creating mobile payment apps based entirely on our existing infrastructure of banks, credit-card processors, and national currencies. Bitcoin now trades at around 20 percent of its peak dollar price set in 2013.

Does that mean bitcoin will soon be a relic? Popper is a reporter, not a seer. And he wisely doesn’t handicap bitcoin’s prospects for success as a parallel currency, even as he details its move closer to the financial mainstream and away from its underground origins.

And he’s right to stick to reporting. The adoption curve of new technologies and the fickle mood of financial markets tend to make fools of would-be prophets. The future of bitcoin depends on both those phenomena.

Topics: trade, banking, technology, e-commerce, payments
Get s+b's award-winning newsletter delivered to your inbox. Sign up No, thanks