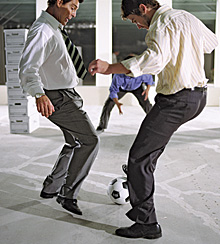 Whether it is project management, engineering, or business development, in today’s corporate environment, more and more work is done in teams. But conflicts among team members can have disruptive effects in the organization that go far beyond the team itself. Team leaders — who set the agenda, ensure performance, and reward or reprimand members — often bear the brunt of these negative effects, regardless of whether they caused them. Ramifications can include decreased performance, widespread distractions, and staff turnover. Since team leaders are often chosen by their superiors, there is no guarantee that subordinates will automatically respect a leader or turn to him or her for advice.

The authors of this paper examined how a leader’s social relationships with his or her team members can create or prevent conflict within the team. To do this, they followed 19 workplace teams with a total of 231 employees in two different construction plants, where team leaders oversee safety, quality control, and promotions and demotions of their subordinates.

The authors found that teams with the least conflict are led by people who have earned respect over time and who are approached by numerous subordinates — both on and off the job — for work-related guidance. The ability of these leaders to manage from the center of the team and to encourage team members to collaborate with one another boosts cohesion and morale and cuts down on turnover. In contrast, leaders who control information by sharing knowledge with only some of their subordinates or who pass information from one individual to another without fostering collaboration, thus keeping team members separated from one another, lead groups with higher levels of conflict and lower long-term viability.

The results show that when subordinates turn to a leader for advice, his or her influence is strengthened, and credibility enhanced, among team members. Leaders who have informal relationships with their subordinates but are also respected as authority figures can better pass on work-related information and build consensus among team members. A leader with a fragmented team and sporadic communication with team members is what the authors call a “brokerage” leader. Although brokers can effectively communicate and transfer information from one subgroup to another, they are not as capable of building consensus, because they are viewed as go-betweens rather than as authority figures. Absent a leader with the authority necessary to build consensus and garner respect, conflict develops and teams are less likely to thrive.

Bottom Line: Given the prevalence of teams in organizations and the importance placed on leaders, the authors of this study contend that leaders need to capitalize on their informal social ties to boost team performance, reduce turnover, and keep subordinates happy.