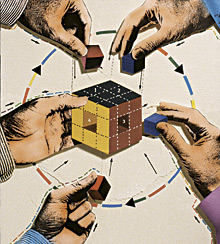 Economics is an imperial science, and its ambition knows no bounds. But the triumphal march of its neoclassical army through the fields of finance and management received a bloody reversal at the hands of reality in the carnage of 2008. A great deal of what we thought we knew about efficient markets, risk, and the behavior of investors and managers has been shown to be wrong. Into the gap have stepped the lightly clad warriors of behavioral economics, one of whose supporters, no doubt, would be Michael J. Mauboussin, chief investment strategist at Legg Mason Capital Management and author of Think Twice: Harnessing the Power of Counterintuition.

Mauboussin is a polymath who has written an entertaining and thought-provoking book about decision making for investors and businesspeople. His threefold objective is to help readers become mentally prepared by learning to identify the causes and consequences of mistakes, to become situationally aware by recognizing problems in their contexts, and to apply this knowledge to mitigate potential mistakes.

Rather than plod through prospect theory, psychology, or social psychology — the grist of behavioral economics — Mauboussin accomplishes his objectives by examining eight decision-making phenomena and illustrating them with intriguing examples and thought-provoking puzzles. Thus, we discover the dangers of depending on experts, and in what circumstances collectives and computers are likely to produce better decisions. Computers, for example, are great for identifying options, but experts excel at selecting among them. Another challenge is to understand the hidden hand of context in decision making. Mauboussin describes a consumer behavior study that found that when faced with a choice between French and German wines in a retail setting, shoppers were heavily influenced by whether French accordion music or German bierkeller tunes were playing in the background. Each nation’s music was capable of skewing sales significantly toward its products. Yet most of the shoppers denied that music had anything to do with their selections!

Each chapter has a handy summary of advice helpful in countering decision biases. Some of this advice includes putting yourself in the shoes of others to understand the context in which the decisions must be made; keeping a journal to collect  feedback from past decisions; creating checklists (general enough to handle changing contexts but specific enough to guide action); and conducting “premortems” by imagining that a decision you are about to make has already been proven wrong and identifying plausible reasons for the failure.

One of Mauboussin’s best ideas is to recognize the roles of skill and luck in determining a decision’s outcome by asking if you can lose on purpose — if you can’t, it’s luck. He warns that when an activity has a large component of luck to it (think blackjack and, dare one say, management), it’s best to focus on the decision-making process rather than the outcomes as a guide to behavior. Betting on outcomes has been a feature of casino capitalism — many people knew that the subprime mortgage process was deeply flawed, but few could argue with the outcomes...before the meltdown. One wonders whether Legg Mason will take its chief strategist’s advice to heart by championing executive compensation schemes based on decision-making processes in the companies in which they invest.

Topics: experts, finance, skills, sales, economics
Get s+b's award-winning newsletter delivered to your inbox. Sign up No, thanks