Gods at War: Shotgun Takeovers, Government by Deal, and the Private Equity Implosion 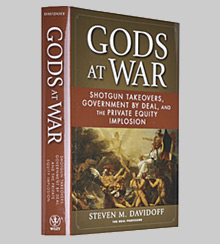 Gods at War is Steven M. Davidoff’s take on the factors that drive and sustain deal making, with particular attention to the last decade and the role of government, as both deal regulator and deal maker. Davidoff, who is a professor of law at the University of Connecticut and the “Deal Professor” on the New York Times DealBook blog, is superbly equipped to write on this subject and does not disappoint. He has written a lucid, topical guide to many of the deals that made headlines in the last few years.

The author sets the stage by identifying six boom-to-bust takeover waves during the past 100 years or so. The first began with the formation of corporate trusts in the late 19th century and ended with the crash of 1907. The second wave was triggered by the spending boom in World War I and ended in 1929 with the Great Depression. The rise of conglomerates was the main feature of the third wave, from the 1960s to the mid-1970s, until it ended with repeated recessions. Its successor, fueled by junk bonds, ran from the late 1970s to the late 1980s, when it was felled by the savings and loan scandal. The fifth wave coincided with the dot-com bubble, and the sixth wave followed hard on its heels with the rise of private equity and global transactions, only to implode in the crash of 2008. This review not only offers a valuable perspective but also underlines the historically pervasive role of leverage in deal making and the breathtaking inability of regulators to prevent abuses before they occur.

In addition to providing a broad scope, Davidoff skillfully drills down into the details of deals, teasing out the effect of nonfinancial elements — such as personality, politics, public opinion, and the roles played by lawyers and advisors — in deal success. He also clearly explains such arcana as material adverse change clauses and reverse termination fees. In his discussion of the role and power of “government by deal,” he explains how securitization allowed banks to separate reward from risk by making the eventual payback of the loans they extended someone else’s problem. Davidoff shows how Bear Stearns overleveraged itself and relied far too much on short-term debt and trading profits, and why traditional governance systems were incapable of monitoring the situation. Only government regulation and a reform of the federal takeover code, he concludes, can create better deal architectures for transactions.

Davidoff says that some acquisitions can make money for buyers as well as sellers, but he acknowledges that the distribution of the rewards is broad, with every deal made in heaven matched by a deal from hell. When it comes to takeovers, the rule is caveat emptor, and this book should be required reading for every CEO contemplating a deal.