Smart Growth: Building an Enduring Business by Managing the Risks of Growth 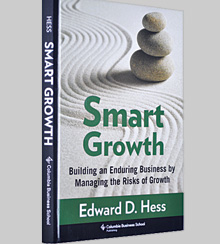 Edward D. Hess, professor of business administration and Batten Executive-in-Residence at the University of Virginia’s Darden School of Business, has a heretical thought: Growth may not be good. In Smart Growth, he questions the four major assumptions behind the conventional wisdom of corporate success, which he calls the “growth mental model” (GMM): that businesses must grow or die, that growth is unequivocally good, that growth should be smooth and continuous, and that quarterly earnings are the primary measure of success. In addition, he supplies a series of trenchant questions for managers to ask themselves about how, why, and even whether their firms should grow.

In nine crisp chapters, Hess demonstrates that the GMM is neither possible in practice nor feasible in theory, and that attempts to meet its demands can create insurmountable obstacles to corporate sustainability. His arguments are supported by a series of case studies showing that growth is usually uneven and episodic — impossible to sustain for more than relatively short periods of time. Thus, attempts to “implement” the GMM result either in profitless growth, especially through acquisitions, or in ersatz earnings produced via a wide variety of financial manipulations. To test whether the concept of the GMM is supported by theoretical perspectives on growth, Hess turns to economics, organizational strategy and design, and biology. He finds that neoclassical economics is the framework that is most sympathetic to the GMM, but its assumptions do not hold up in the real world; that the strategic and design perspective offers little support for the GMM; and that biological theories are notable for the stress they put on the limits to growth. So there is little support for the conventional wisdom in theory.

Hess’s conclusion is that corporations should aim for sustainable or “smart” growth by asking some key questions, especially regarding the resources most needed to support such growth. Following economist Edith Penrose’s resource-based theory of the firm, he contends that the true limit to growth is usually defined by the capabilities of the firm’s managers — supporting this argument with the well-documented case of Starbucks’s overreach, in which the rapid expansion in the number of stores caused liabilities to rise precipitously and diluted the value of the brand.

All this makes good sense. The only shortcoming may be the author’s failure to examine why the GMM is so robust in the face of all the evidence against it. Is it because there are large constituencies in the economy that generate revenue by pushing the GMM and thriving on the turmoil it creates? If so, is there a need for public policy addressing it? And what risks do firms run if they eschew the flawed GMM in favor of smart growth?